Posted on December 3, 2014 by lmharnisch 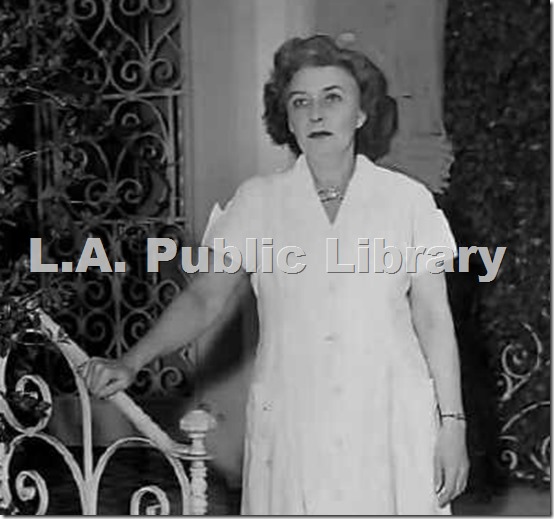 Lulu Atwood, in a photo courtesy of the Los Angeles Public Library.

In this series of posts on the Georgette Bauerdorf case, we have looked at the history of El Palacio Apartments, crime in West Hollywood, the history of the Hollywood Canteen, Georgette’s movements before the killing, how the killing might have occurred, the killer’s behavior afterward – even what type of car she was driving and the neighborhood where it was abandoned.

And yet we’re not quite done. One thing that bothers me is the behavior of Fred and Lulu Atwood, who performed cleaning and maintenance work at the apartments. It isn’t that they weren’t helpful, it’s that they were so exceedingly helpful in the Bauerdorf case.

It is Fred Atwood who said:

— He had only spoken once to Georgette.

— He was awakened about midnight by the sound of a woman’s high heels clicking back and forth on the kitchen floor.

— He heard a loud crash of something metallic.

— The next morning, the door to the apartment was open and there was no forced entry.

— That he and his wife, Lulu, had been cleaning in the adjacent apartment and noticed the door half-open so they went into the Bauerdorf apartment about 11:10 a.m.

— That they called to see if anyone was home and when they didn’t get an answer went about their regular cleaning duties.

–That they heard water dripping, so his wife went upstairs to investigate and found Georgette’s body in the bathtub.

–That his wife came running downstairs calling: “There’s a body in the bathtub!”

— That he and his wife went upstairs together and saw Georgette in the bathtub.

–That he shut of the hot water faucet, which was still running or dripping.

— That he pulled the plug, draining the tub.

–That they ran to tell the manager to call the police.

And hHere is what Lulu Atwood said:

— She and her husband were asleep on the night of the killing when they were awakened by a metallic crash.

— “We couldn’t tell what time it was because we do not have a clock in our room, but we are quite sure it was in the early morning hours.”

— That she went into the Bauerdorf apartment the next morning, heard water dripping upstairs and went to investigate.

— “I saw her floating on top of the water. I leaned over and turned off the faucet and then I ran out to get my husband and Mrs. [Thea] Alexander, the manager.”

In Fred Atwood’s version, he was awakened about midnight by the sound of a woman’s high heels in the kitchen.

In Lulu Atwood’s version, they were awakened by a metallic crash, but they didn’t know what time it was because there was no clock in the bedroom.

More important: In Fred Atwood’s version, he and his wife entered the Bauerdorf apartment together.  Lulu Atwood’s version strongly implies that Fred wasn’t there until she ran and got him.

Consider the statement of actress Stella Adler, who lived in the apartment next to Bauerdorf unit.

Oct. 14, 1944: Adler, who occupied “the apartment directly opposite that of the Bauerdorfs, said she “didn’t hear a thing all night,” Los Angeles Examiner.

We don’t know where the Atwoods lived in relation to Georgette’s apartment. But recall that the original advertising said the building offered soundproof walls and floors. It would also be interesting to know the location of the unidentified neighbor who heard Georgette screaming.

As I have said before, without visiting the crime scene, it’s impossible to be sure about certain aspects of the case. And perhaps I’m being overly suspicious. But I would like to hear the Atwoods’ accounts first-hand.

I am retired from the Los Angeles Times
View all posts by lmharnisch →
This entry was posted in 1944, Cold Cases, Crime and Courts, Hollywood, Homicide and tagged 1944, cold cases, crime and courts, Georgette Bauerdorf, hollywood, homicide. Bookmark the permalink.