Sheriff’s investigators examine Connie Bauerdorf’s 1936 Oldsmobile, which was being used by Georgette Bauerdorf and disappeared after the killing, courtesy of the Los Angeles Public Library.

One of the mysteries confronting investigators in the Georgette Bauerdorf case was what became of the car, a green 1936 Oldsmobile, California license 59-B-875 that belonged to her sister Connie and which Georgette was using while the family was out of town. (Daily News, Oct. 13, 1944).

Bauerdorf’s car is frequently and erroneously described as a Pontiac, so here’s a comparison photo, courtesy of Wikipedia, of a similar model Oldsmobile, although this one has turn signals on the front fenders. 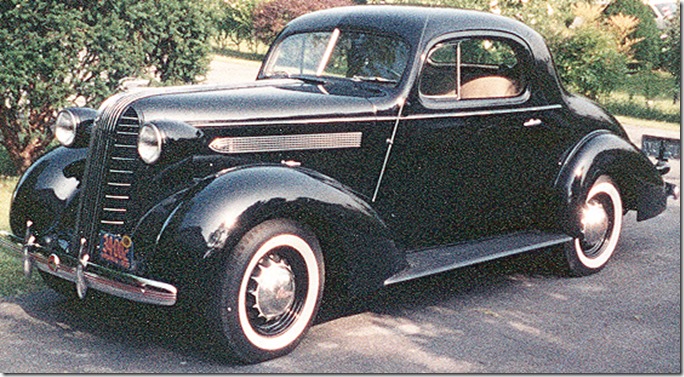 Here’s another 1936 Oldsmobile coupe without the turn signals on the fenders, courtesy of bballchico on flickr. The bumpers are slightly different.

Notice that there appears to be a sticker in the window. I originally thought this was a gas rationing sticker, but I can’t discern the detail in either photo. In March 1944, an “A” gas ration coupon was reduced from 180 miles a month to 120 miles a month. In another story, The Times explained that an “A”” gas coupon was good for about two gallons of gas per week.

First, there is no driver’s side mirror on the Bauerdorf car.

Second, there’s a scrape along the left front fender, which is dented.

The Bauerdorf car also has front-end damage to the grille and the left bumper guard is missing.

News accounts state that the Bauerdorf car often broke down because of engine problems, so one could assume that the vehicle was not well-maintained during wartime shortages and that whatever damage it sustained in an accident wouldn’t have been repaired. The question is whether this damage was new and whether the killer had been in an accident en route from the apartment to where the car was abandoned. One news story refers to investigators speculating that the damage was recent, but there is nothing further about it.