The front door of the Bauerdorf apartment, photo courtesy of the Los Angeles Public Library.

In the previous post, we examined the scenario about the light fixture in the entryway to the Bauerdorf apartment. At the time of the killing, there was intense speculation that the killer disabled the light so that Georgette Bauerdorf would be unable to see who was at the door and thus admitted the killer.

Some news accounts said that the light was “automatic,” but a closer examination of this photo shows a switch by the door, which may have operated some sort of exterior light or — as several readers pointed out — an interior light.

Here’s a detail of the photo, showing the switch next to the door.

But look at what else we have: There appears to be a fairly robust door outside the apartment.  Something more than a screen door.

Here’s another view, taken from the outside.

Apparently there was a rather heavy ironwork gate outside the entryway to the Bauerdorf apartment. 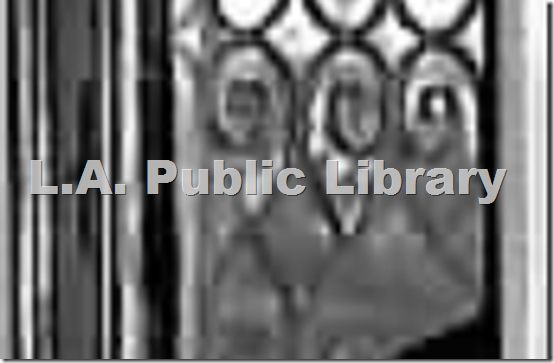 On the left, it’s hard to be positive because of the angle of the door and the degree of magnification, but there appears to be a small metal door that served as a peephole and allowed someone to look outside without opening the door, an architectural detail that was common in homes of the 1930s. Of course, such security measures didn’t prevent Jack Dempsey and a couple of private detectives from breaking in on his wife and a fight trainer.

As I noted earlier, it’s impossible to be sure without visiting the apartment – assuming it hasn’t been remodeled over the years. But these are my hunches.

One more detail about the door. Investigators speculated that the killer might have had a key to the apartment, or possibly a passkey. But as noted by one of the former custodians who was detained by investigators, the door could be bolted from the inside, preventing access even to someone who had a passkey.