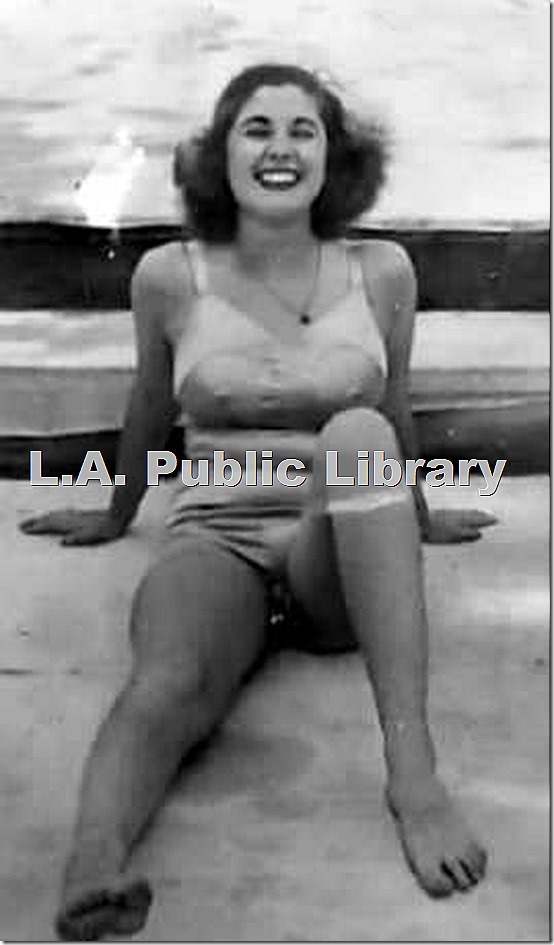 Georgette Bauerdorf in a photograph courtesy of the Los Angeles Public Library.

So far in our examination of the Georgette Bauerdorf killing, we have looked at almost every aspect except the way the investigation was conducted.

Judging by news accounts, the case received the typical homicide investigation: Detectives checked with Georgette’s neighbors at El Palacio Apartments and interviewed more than 100 people at the Hollywood Canteen. Attempts to track down servicemen who were at the canteen that night were hampered because the canteen didn’t keep records of visitors’ names. 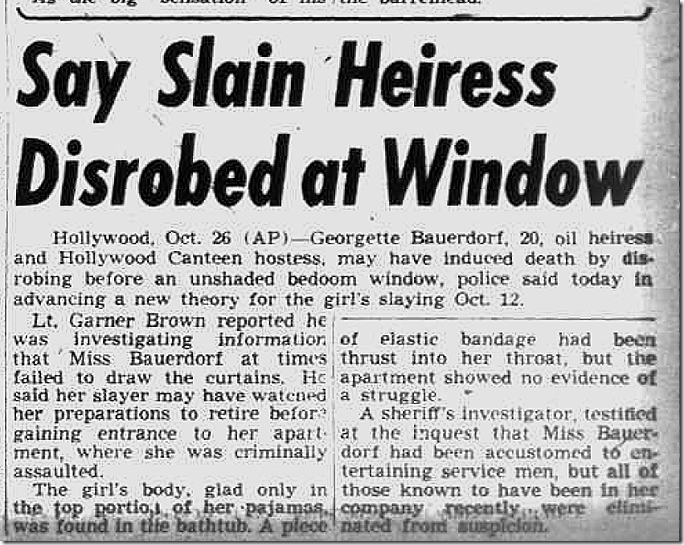 An Associated Press story reports that Georgette sometimes failed to pull the blinds before undressing, via the New York Evening Post.

Investigators eventually located and eliminated Cpl. Cosmo Volpe, a P-38 mechanic temporarily stationed in Los Angeles for training. who initially attracted attention because he supposedly insisted on jitterbugging with Georgette at the canteen.

They talked to Georgette’s family and interviewed her father’s secretary, Rose Gilbert, who went shopping with Georgette the day before the killing. They also interviewed Georgette’s friend June Ziegler, who accompanied Georgette into the canteen and said that Georgette was anxious and wanted June to spend the night with her. They also received information from Sgt. Gordon R. Aadland, who said he was hitchhiking and got a lift from Georgette on the night she was killed.

Information was obtained from Pvt. Jerome “Jerry” Brown, whom Georgette had met at the canteen and whom she planned to visit in El Paso, having purchased an airplane ticket the day before she was killed.

An Oct. 10, 1944, entry in Georgette’s datebook refers to “Mr. Wade,” who was never publicly identified.

Investigators went through Georgette’s datebook, and they recovered names from bundles of letters from servicemen thanking Georgette for letting them stay at her apartment.

Crime scene specialists examined the apartment for evidence, and also went over Georgette’s car on the assumption that it had been dumped by killer about 10 miles away.

Investigators also tried to trace the unusual fabric used that was shoved down her throat: A piece of crepe tetra, a material that hadn’t been imported into the U.S. in many years.

Evidence from the autopsy showed she fought with the killer:  “Thumb and finger marks on her face, lips abdomen and thighs prove the attacker was powerful with almost ape-like hands.” (Examiner, Oct. 15, 1944).

And by the time of the inquest, the clues in the case had essentially dried up.

There are two elements that I hadn’t touched before. One is the news reports that Georgette sometimes undressed without closing the blinds, leading investigators to speculate that her killer had been watching her.