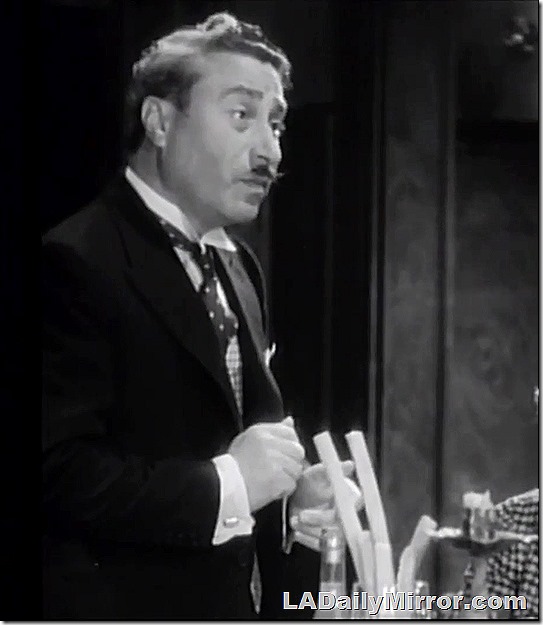 For Monday, we have a mystery gentleman. His companion has been cropped out due to insufficient mysteriousness and will appear Friday.

END_OF_DOCUMENT_TOKEN_TO_BE_REPLACED

Elizabeth Short contrasted with the unidentified woman found in George Hodel’s photo album. Not at all the same.

Here are six reasons Dr. George Hodel did not kill Elizabeth Short that you will need to know before watching the TNT mini-series “I Am the Night” or listening to the eight-part podcast accompanying the production.

END_OF_DOCUMENT_TOKEN_TO_BE_REPLACED 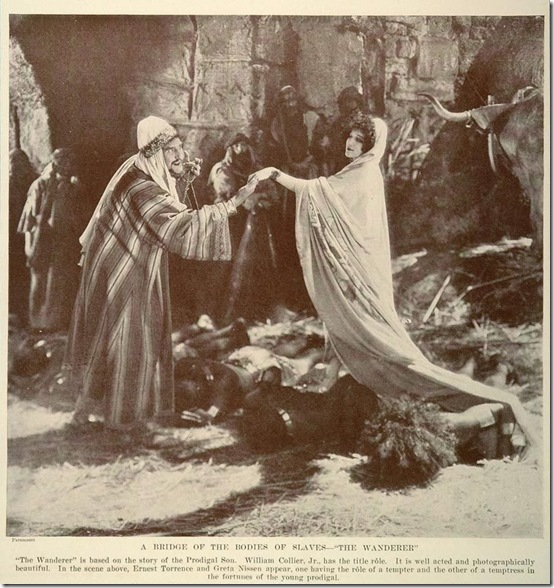 Photo: Ernest Torrence and Greta Nissen in “The Wanderer,” listed on EBay at $34.95.

Long remembered for playing both villainous and comic supporting roles in silent films, Ernest Torrence achieved big success on the New York theatrical stage before becoming involved with movies.  Torrence was ambitious from the time he was a child in Scotland, and employed his talent as a calling card for America.

The actor grew up in Scotland only a mile from Edinburgh, later studying at the Edinburgh Academy.  He studied piano and singing several years at the Royal Academy of Music in London, winning medals and appearances in concerts, before spending three years taking singing lessons in Stuttgart, Germany.  Torrence first appeared on the stage in London “in a romantic role at the Savoy Theatre, but soon afterward I jumped into musical comedy work and sang at the Gaiety Theatre.”  His deep baritone was appropriate for appearing in Gilbert and Sullivan.  He also wrote some compositions, including music for a Greek play which was produced in Edinburgh when he was 19.

END_OF_DOCUMENT_TOKEN_TO_BE_REPLACED

After isolating through the pandemic, sweltering summer, and blazing fires, Cineconline brought a respite of lighthearted , breezy entertainment. While Cinecon 55 occurred only online, it succeeded beyond its wildest dreams in providing rare films to thousands of film fans. Thanks to collectors and archives, rare, unseen silent and sound films and television kinescopes brought hours of happiness to grateful audiences.

The online Festival kicked off September 3 with a program featuring trailers that survive from lost silent features, providing a hint of the stories and entertainment they might have shared. Included among the lot was the trailer for the recently rediscovered “Lorraine of the Lions,” hooking audiences for its September 5 screening.

END_OF_DOCUMENT_TOKEN_TO_BE_REPLACED

“The Atomic Submarine” is available for streaming from Amazon.

END_OF_DOCUMENT_TOKEN_TO_BE_REPLACED

UC Irvine professor Miles Corwin, an old friend from the L.A. Times, spent months interviewing me about the Black Dahlia case. Here is Miles’ deep dive, published in the Delacorte Review, into my decades-long journey exploring the life and death of Elizabeth Short. It’s also been published on Crime Reads. 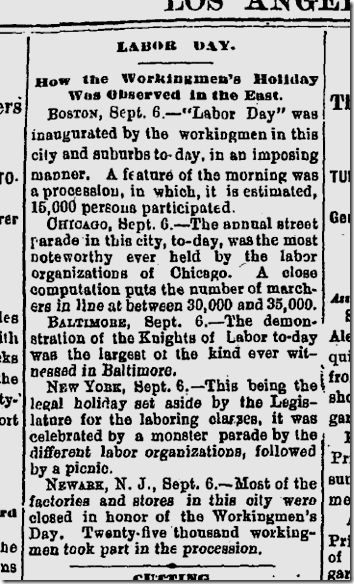 Sept. 7, 1886: The Times publishes a roundup of events marking  Labor Day, but there are no reports of any celebrations in Los Angeles. On the jump, Labor Day, 1891, is celebrated on the West Coast, but there’s nothing about Los Angeles.

For Labor Day, 1895, The Times reported on a parade that began at the old junction of Temple, Main and Spring, which was  changed when Spring Street was straightened to make room for City Hall.

The parade went down Spring to 5th Street, east on 5th to Main, north on Main to 1st and from there to La Grande Station [the Santa Fe depot  at 1st and Santa Fe Avenue (d. 1946)], where many participants took the cars to Redondo Beach.

The parade ended with 31 men in black shirts and red neckties with “a blood-red flag bearing the words “Socialistic Labor Union,” The Times said.

“The Socialistic Labor Union refused to go to Redondo, claiming that the principles of the organization forbade the needless enriching of a railway corporation’s coffers, and there was small opportunity to capture a train,” The Times said.

END_OF_DOCUMENT_TOKEN_TO_BE_REPLACED

Stage legend Ethel Barrymore continually sought challenges to advance her craft through her many decades in the theater. In the late 1920s, she took on perhaps her biggest challenge, portraying the lead character in “Scarlet Sister Mary,” adapted from Julia Peterkin’s 1928 Pulitzer Prize-winning novel of the same name. What she then considered appropriate and rewarding for her career would today be considered a major faux pas, since the lead character was actually a 16-year-old Black woman.

The third book of novelist Peterkin, “Scarlet Sister Mary” followed in her tradition of strong Black characters speaking in the Gullah dialect, with independent, self-assured women making their own rules for life and love. While she wrote about the Black experience, Peterkin was actually the white plantation mistress, but one who felt a strong affinity for her characters and their real life models.

END_OF_DOCUMENT_TOKEN_TO_BE_REPLACED

Screenplay by Dwight Taylor from a novel by Steve Fisher. Music by Leigh Harline, photography by Milton Krasner.

“Vicki” is available on DVD from Amazon.

END_OF_DOCUMENT_TOKEN_TO_BE_REPLACED

Posted on September 3, 2020 by lmharnisch

Note: This encore post from 2018 is still timely. Alas.

Somewhere, somebody is already thinking about a Black Dahlia costume for Halloween, so here is my annual reminder: Dressing up like the victim of a grotesque murder is not the look you want. Please rethink your choices. Thanks. 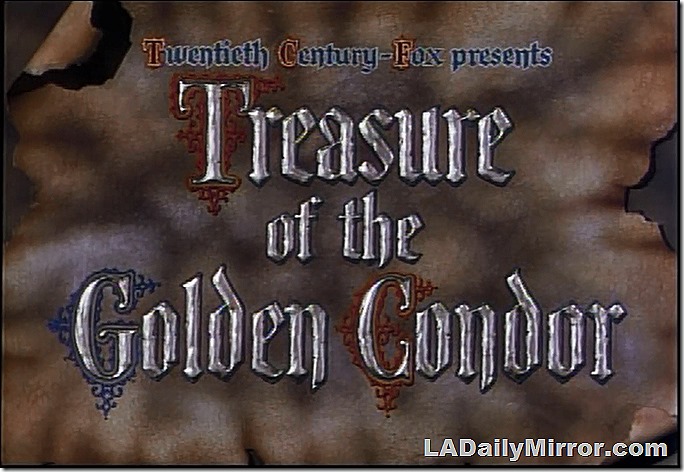 Screenplay by Delmer Daves based on a novel by Edison Marshall. Color by Technicolor, consultant Leonard Doss.

“Treasure of the Golden Condor” is available on DVD from TCM.

END_OF_DOCUMENT_TOKEN_TO_BE_REPLACED

Per an ad in the July 27, 1937, Daily Variety, “Public Screwball No. 1 to the film audiences of the world is a rubber-faced flibber-jibbett who began his career in talking pictures 30 years ago, wrote the first all-talking picture nine years ago, won fame as Broadway’s only Scotch-Irish Jewish comedian, and is named Hugh Herbert.”

Born 1888 in Binghamton, N.Y., Herbert worked as a newsboy, messenger and tailor’s boy to help make ends meet for his family, before becoming usher and assistant prop master at Proctor’s 125th St. Theatre in Harlem.  He made his stage debut as a boy in the melodrama “Blue Jeans,” working in a saw mill.  He told the Los Angeles Times in a Sept. 18, 1938, story that “…I had to take bows as I picked up boards.  That taste of applause made me an actor.  You never get over applause, never get over it.  Gets in your blood, your ears, or something.”

END_OF_DOCUMENT_TOKEN_TO_BE_REPLACED

I decided to randomly surf Wikipedia this morning and I’m never disappointed with how bad it is. Example: Some bozo has restored Jacob Edward Fisk as a “suspect” in the Black Dahlia case. Fisk’s name was added as a prank in 2009 and has become hopelessly embedded in the case.

“The Long Arm” is available on streaming from Archive.org, but the audio ranges from tolerable to atrocious. The DVD is available from Amazon UK in Region 2 format, which is incompatible U.S. players unless you have an all-region player.

END_OF_DOCUMENT_TOKEN_TO_BE_REPLACED 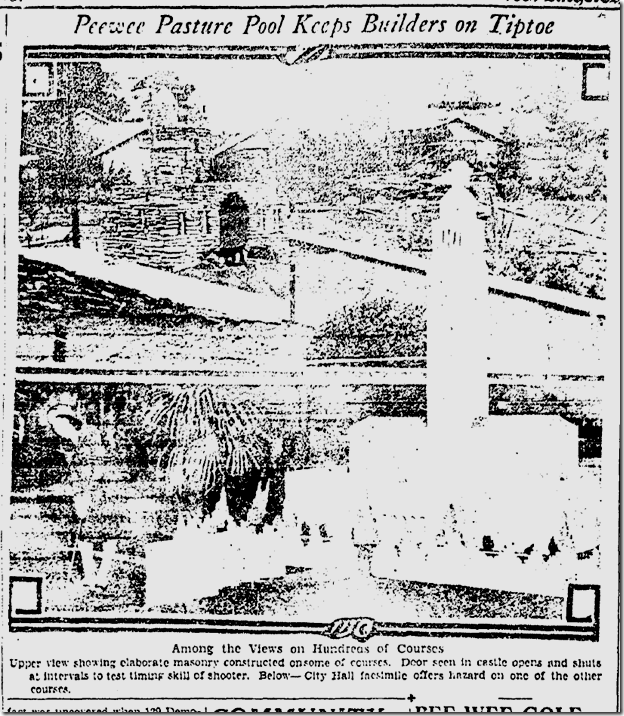 The 1920s saw a series of fads sweep the nation as the American populace searched out the new and exciting after experiencing hardship and deprivation during World War I and a great recession in the early 1920s.  Mah Jongg, Ouija Boards, Crossword Puzzles, and the Charleston were a few of the newest things introduced to the American public in the middle of the decade, soon followed by miniature golf.  This peewee golf boom exploded in the late 1920s, with celebrities joining the bandwagon.

END_OF_DOCUMENT_TOKEN_TO_BE_REPLACED

Women began campaigning for universal suffrage in the United States at the 1848 Seneca Falls Convention. Over the next seven decades, they would patiently and persistently push the message of enfranchisement through ridicule, patronization, and insults from their opponents. Moving from genteel lectures, magazines, and pageants to marches and mass marketing, women took their message to Americans. With the advent of motion pictures, more people could be reached at one time.

Traditional moving picture companies discovered the power of movies to inflame emotions and influence action early on. Renowned director D.W. Griffith focused on social issues in many of his early shorts, particularly “A Corner in Wheat”, revealing the degradation, manipulation, and enslavement of the poor by unscrupulous merchants and investors. Reformers influenced by these films worked to improve living and working conditions of struggling Americans and punish those inflicting pain.

Mary Mallory is giving a virtual presentation on “Your Girl and Mine” on Aug. 19 at 7:30 p.m. PDT. Tickets are $7.50 for Hollywood Heritage members and $15 for nonmembers.

END_OF_DOCUMENT_TOKEN_TO_BE_REPLACED

How to Fix Archive.Org Thumbnails

One of the annoyances of Archive.org is that thumbnails seem to be assigned randomly instead of properly displaying the cover. If you Google for instructions, you will find them needlessly complex. Here’s the nearly painless way to fix them. After you fix one or two, it will be easy. Almost so easy that a computer could do it.

END_OF_DOCUMENT_TOKEN_TO_BE_REPLACED

This is a clip from “The Temptress” (1926) showing the St. Francis dam under construction. The dam failed in 1928, and the flood left hundreds of people dead or missing. The incident is referred to in “Chinatown” (1974) as the “Van der Lip dam disaster.”

“The Temptress” is available on DVD from Warner Archive.

END_OF_DOCUMENT_TOKEN_TO_BE_REPLACED

“Your Girl and Mine,” Moving Picture World.

From the 1840s on, many women in the United States fought to vote. Considered merely chattel, like slaves, women were forced to endure horrible marriages, see their children taken away, and forbidden to work in most professions, the property either of their fathers or their husbands.

Women like Susan B. Anthony and Elizabeth Cady Stanton began fighting for woman’s suffrage, believing if women had the right to vote, not only would their rights and conditions improve, but so would that of those less fortunate: the factory worker, the slave, the foreign laborer. The states and country would be forced to look at conditions like economics, schooling, and social issues, rather than focusing on military and industrial issues. As Anthony stated, “Women, we might as well be great Newfoundland dogs baying to the moon as to be petitioning for the passage of bills without the right to vote.”

Mary Mallory is giving a virtual presentation on “Your Girl and Mine” on Aug. 19 at 7:30 p.m. PDT. Tickets are $7.50 for Hollywood Heritage members and $15 for nonmembers.