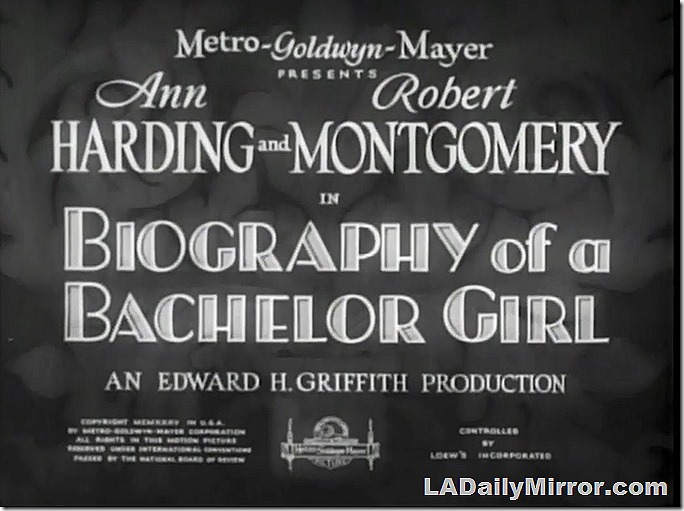 “Biography of a Bachelor Girl” has never been commercially released. The movie aired in 2013 on TCM during its tribute to Anita Loos and will air March 18, 2020.  The film has its problems but definitely deserves to be seen. 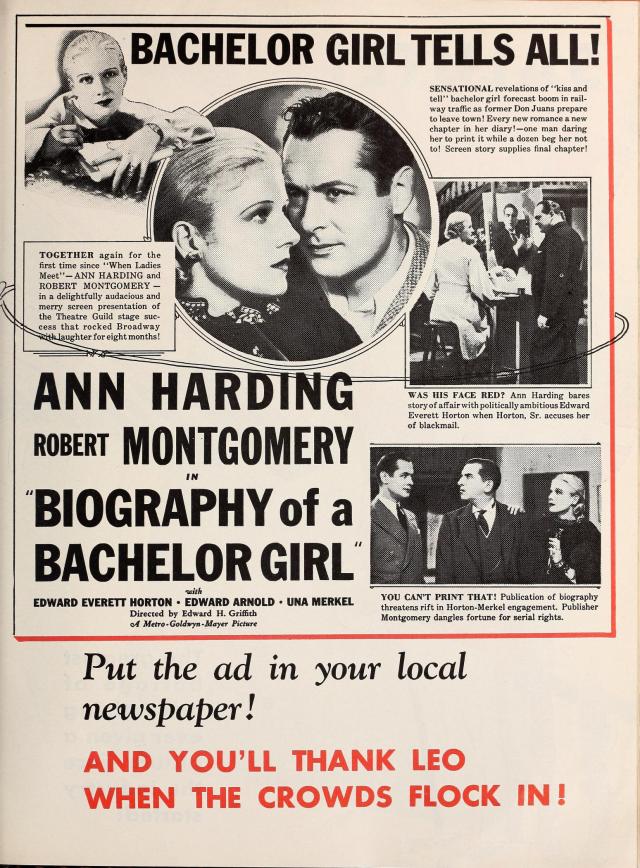 I picked “Biography of a Bachelor Girl” based on a rave review in the Hollywood Reporter and despite the general disapproval of Motion Picture Reviews, published by the Los Angeles branch of the American Assn. of University Women, which gave a well-deserved bashing to “Life Begins” and “A Child Is Born.”

The script was based on “Biography,” by S.N. Behrman, which played on Broadway for 267 performances in 1932-33 with Ina Claire and Earle Larimore in the leads, and 16 performances in 1934, with Claire and Shepperd Strudwick in the leads. Mystery guest Charles Richman is the only one from the Broadway cast to appear in the film. (The production received a middling review from the New York Times’ Brooks Atkinson). The play has also been performed in Southern California several times, with leading ladies Alice Brady (1934) and Eve Arden (1947).

The film, fortunately, is not terribly stagey (see “Life Begins”) and entertaining, though it treads familiar ground. A jaded, cynical magazine editor (Robert Montgomery) wants to buy the rights to the life of portrait artist Marion Forsythe (Marion Froude in the play) on the belief that her many amorous conquests will entertain the magazine’s “moron” readers. He, of course, falls for her, and adding to the mix is one of her old loves (Edward Everett Horton – I know, I know) who is now engaged to a prominent socialite (Una Merkel) and is wealthy, respectable and considering a run for political office. Will her memoirs be published, ruining her old beau’s political ambitions? And the script is off and running – to a rather abrupt ending, though the final scene is quite nicely done.

Robert Montgomery does fine as jaded, slow-burning editor Richard Kurt who reveals that he is at heart tender and deeply wounded. As Marion Forsythe, Ann Harding is called on to be beautiful, sensitive, empathetic with a strong dose of living – and loving – for  the moment. She is quite beautiful in James Wong Howe’s photography, and manages sensitive and empathetic without problem, but pulling off the devil-may-care nature of a presumably Bohemian “free love” artist is beyond her.

Compensating for all of that is Edward Everett Horton’s over-the-top performance as twitchy, double- and triple-taking Leander “Bunny” Nolan. I’m a huge fan of Horton and I can’t think of anyone who could pull off so much nervous twitching and rapidly changing expression — he is a walking inferiority complex.

Edward Arnold is tossed into the mix in an odd role for him – a kindly, world-wise, sage commentator on the action.

The most curious aspect of the film, and it’s an odd one, is the abrupt ending. I haven’t seen the play, but Brooks Atkinson noted (Dec. 13, 1932) that the Broadway production seemed “strangely attenuated.”

As you might expect, the Hays Office massively disapproved of such goings-on and getting to the play to the screen was a challenge. The AFI entry on the film has more information.

Miss Harding is herself again and she’s a joy, the picture is a pleasure, and the production is an entertainment you can’t afford to miss. It’s an elegant adaptation of a stage play by Anita Loos and Horace Jackson, so smoothly, so expertly, so painlessly directed by E.H. Griffith that you want the serio-comic mood to last forever instead of being over in a mere hour or so. Book it, book it big by all means, it’s a treat for the customers….

There are so many delightful moments so well worked out in the writing, so deftly accomplished without ever dragging humor in by the heels just for a laugh and keeping the love scenes keyed to the proper romantic pitch, that Anita Loos and Horace Jackson earn themselves an enormous pat on the back. It’s one of the best movies ever made from play material.

Much ado about whether or not to publish the diary of a girl artist who has startled the world with her reputed love affairs. Ann Harding, always lovely, is her charming self, though somewhat miscast as a lady with a sensational reputation. Robert Montgomery, of the winning smile, plays the part of a misanthropic young man, and Edward Everett Horton is rather less funny than usual. The picture suffers from an unnecesary amount of dialogue and lack of action, but may have been better as a play. It is superficially entertaining, pleasant, but a disappointing medium for a talented cast.

In the cinema edition of S.N. Behrman’s play “Biography,” Miss Ann Harding encounters some difficulty in pretending to be the wise and joyous artist whom Ina Claire interpreted so agreeably on the stage three seasons ago. Mr. Behrman, you may remember, defined his heroine as a “big laissez-faire girl,” and Miss Claire made her a generous, witty and gallant lady who dissolved the conflicting hates of her various friends in the warm sunshine of her own personality. Unhappily Miss Harding, as she reveals herself on the screen, is not temperamentally of that breed, tending on the contrary to be a coolly intelligent, iron-willed and slightly superior lady who causes the male of the species to shiver with foolish embarrassment under her chill and capable stare. Nor is Robert Montgomery, whose talent is for pleasant exterior comedy, any more at home as the venomous radical editor whom Earle Larimore played with such belligerent skill on the stage.

The superficial nature of the photoplay is best indicated by the change of the title to the titillant “Biography of a Bachelor Girl,” which tells all you need to know of the talkative and rather terribly meaningless work which traces its ancestry dubiously to Mr. Behrman’s play. 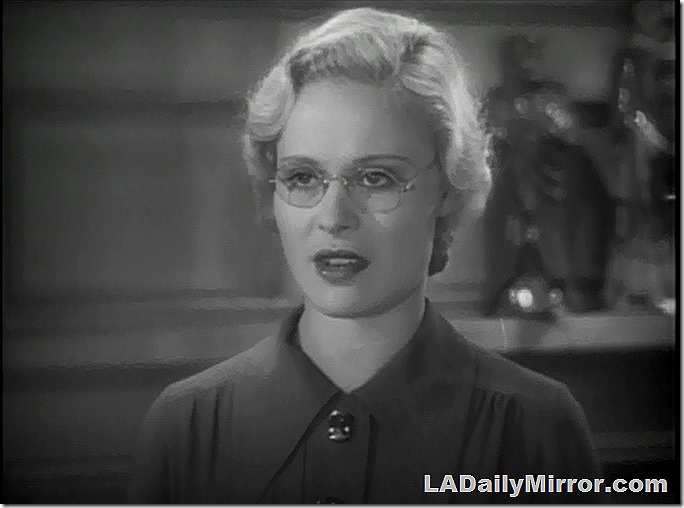 For Monday, we have a mystery woman. In what may be a first, she disapproves and yet approves of such goings-on.

Update: This actress is unidentified in any resource I can find. It is always my hope that the Brain Trust will be able to add a name. Various names were suggested but in every case, the actress was never recorded as working at MGM in 1934. This actress and the one who follows get brief but excellent screen time – a close-up and some lines. A little more than a screen test or some minimal exposure. 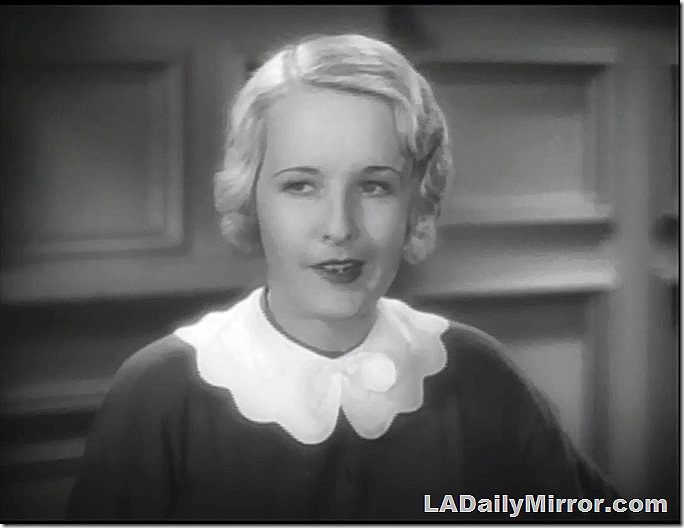 For Tuesday, Monday’s mystery woman has two mysterious companions. This is mystery companion No. 1. She approves of such goings-on.

Update: Our mystery actress is one of what Eve Golden calls “the Say gals,” who flourished in 1930s films and were always given the line “Say, you must have invented the crimped bottle cap” or “Say, I’ll bet you know how to send a telegram to the North Pole.” 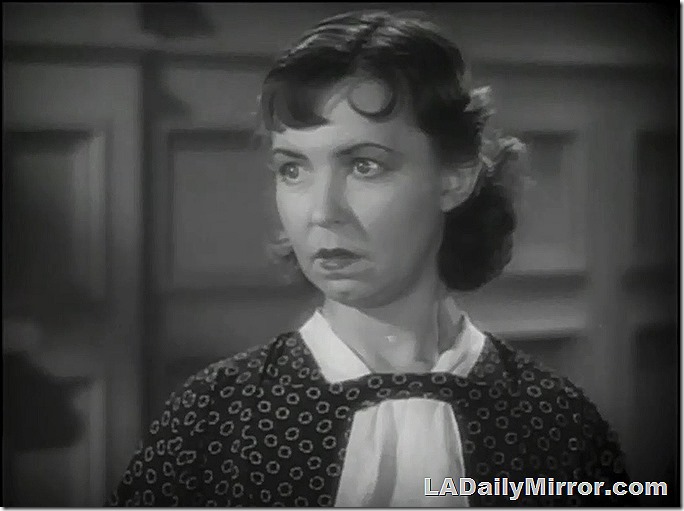 And this is mystery companion No. 2. She is uneasy, but generally approves of such goings-on.

Update: This is Gertrude Sutton. 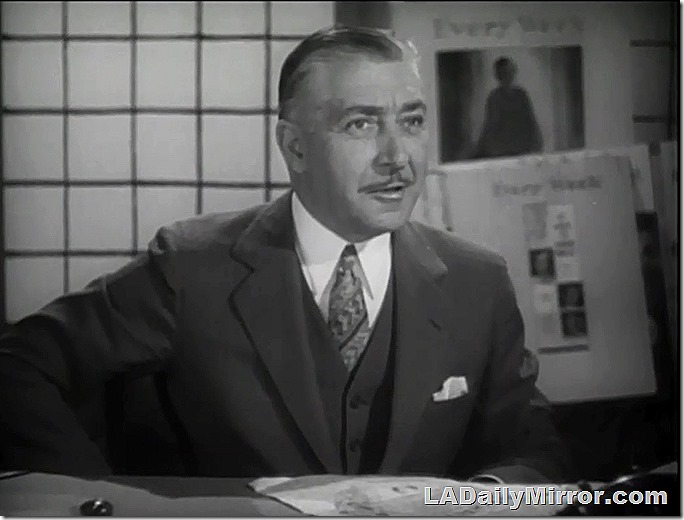 Update: This is Richard Tucker. 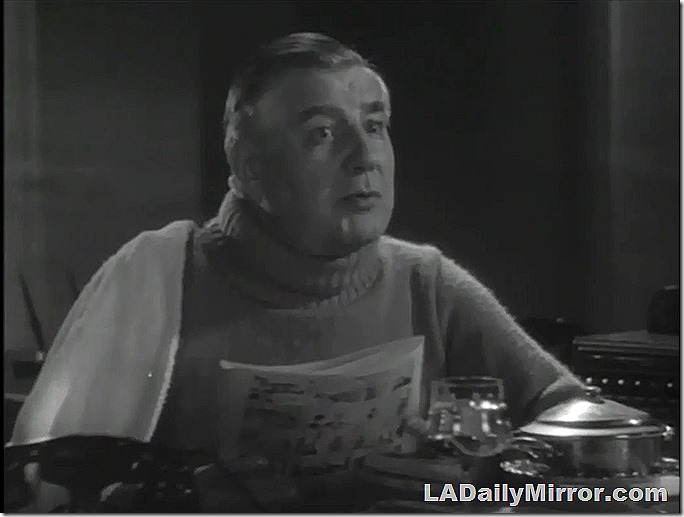 This is distinguished mystery gent No. 2.

Update: This is Charles Richman, the only member of the Broadway cast to appear in the film. 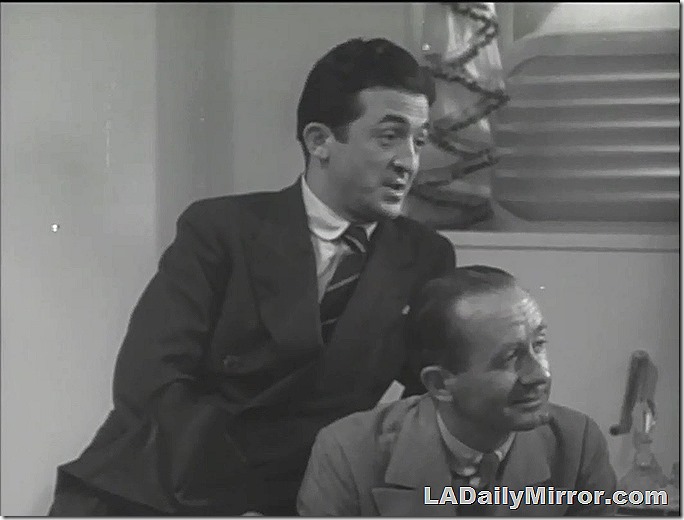 We also have a pair of somewhat undistinguished mystery guests. 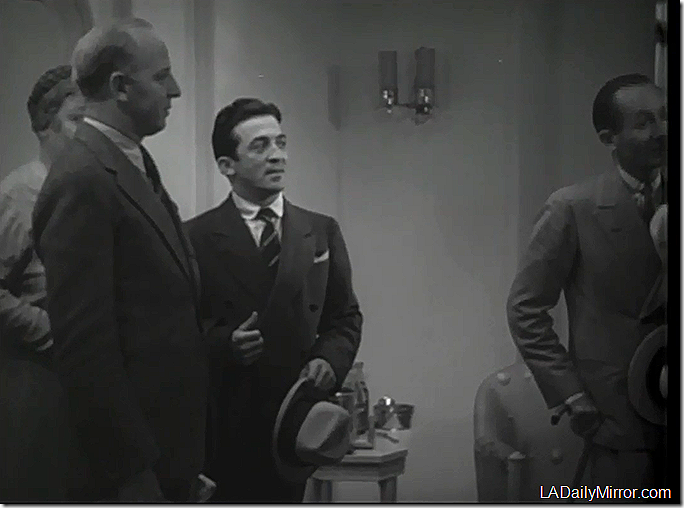 Here’s another shot of the reporters. Walter Brennan was 6 feet tall. That eliminates Hendricks of the Journal (on the right). But the man on the left, who might be 6 feet tall, looks nothing like Walter Brennan. 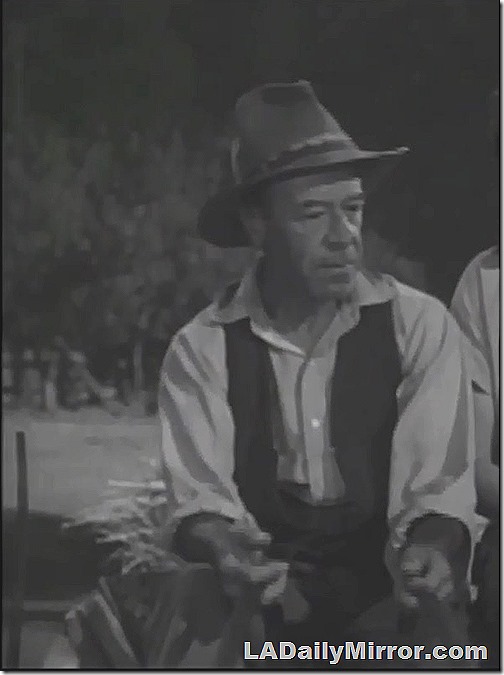 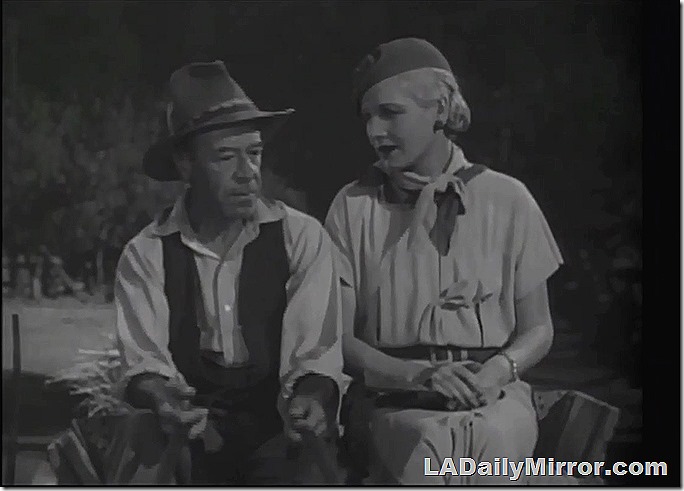 For “Aha Thursday,” we have a mystery guest with a high “Aha” quotient. The mystery leading lady has been cropped out due to insufficient mysteriousness. She will appear Friday. 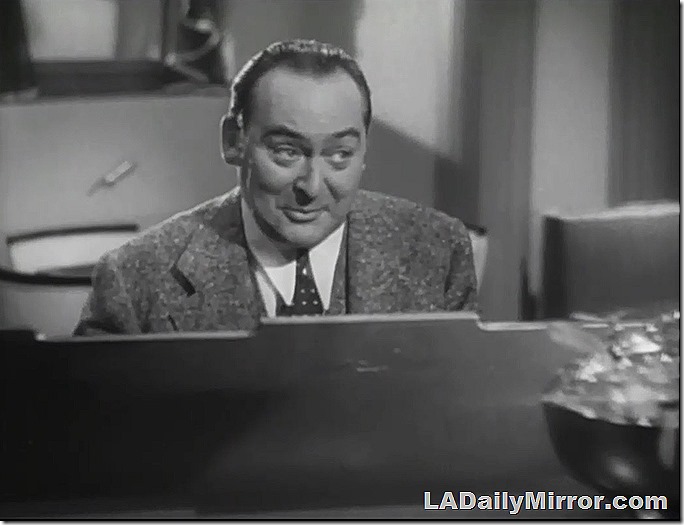 Our other “Aha Thursday” gent is really more of a Friday. But Friday is loaded up with unmysterious people.

Update: This is Edward Arnold. 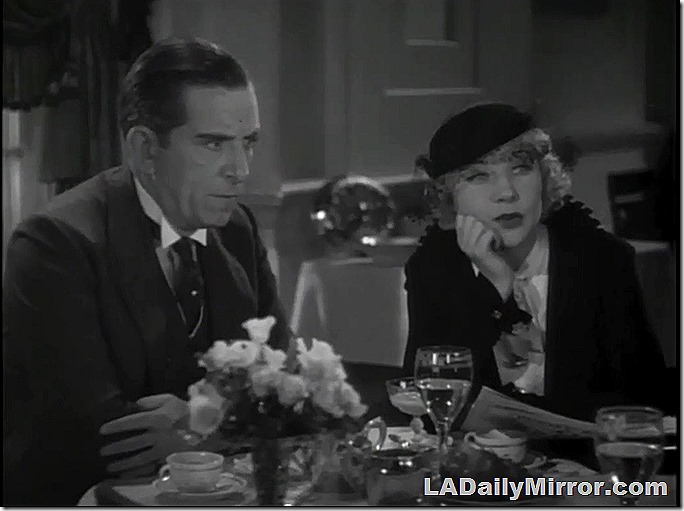 For Friday, we have this not terribly mysterious couple. 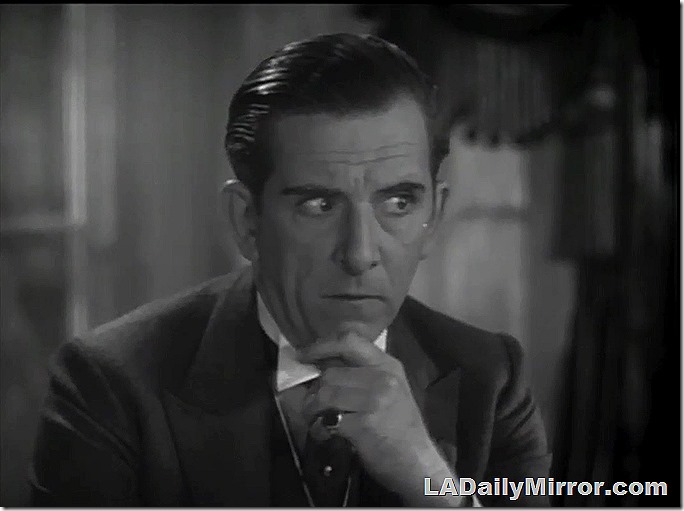 And no, he does not approve of such goings-on. Oh my no. 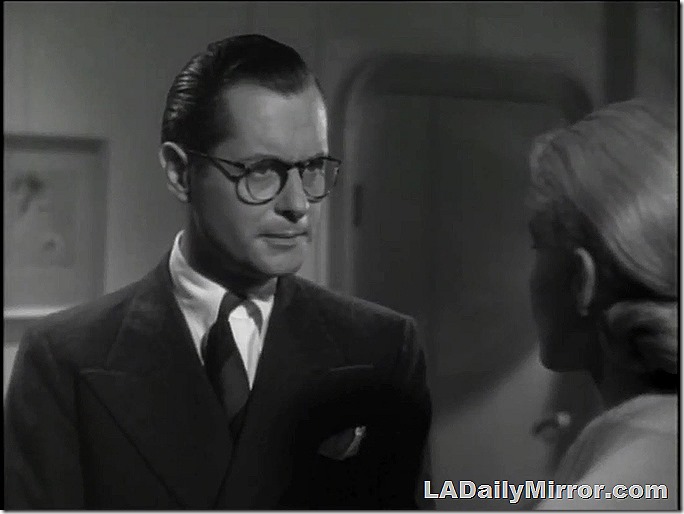 Update: Robert Montgomery and Ann Harding as Back of the Head Woman. 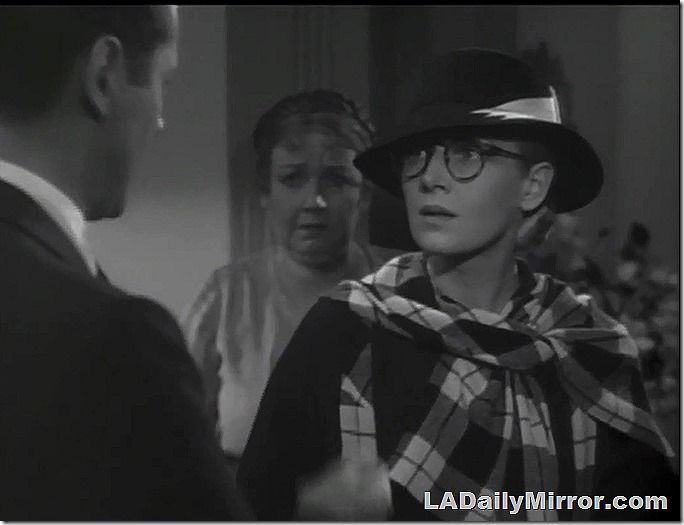 And here’s our mysterious leading lady.

Update: Robert Montgomery as Back of the Head Guy, with Greta Meyer and Ann Harding in disguise. 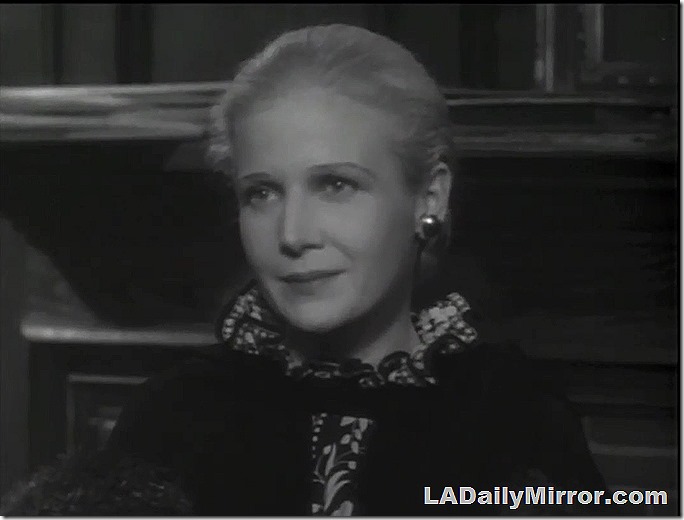 And here’s a better shot of her.

Update: This is Ann Harding.