Continuing its long tradition, UCLA presented its popular Festival of Preservation condensed into a mini film festival over one weekend, unlike those in the past spread out over a month. The selection covered the gamut of entertainment, from film noir to silents to animation to television kinescopes. While I was only able to attend one day, the films I watched looked great and offered moving and hilarious entertainment.

I attended Saturday, February 16, to see restored silent shorts and eclectic TV productions. The day kicked off with a screening of “Playhouse 90,” preceded by a rare, fascinating kinescope of a closed-circuit press conference filled with elaborate production work, cutting back and forth between stars, sets, and the TV stage. Opening with a shot of CBS Television City off Fairfax Avenue, the kinescope featured appearances from a wild blend of behind-the-scenes executives and major stars.

Producer Martin Manulis and other CBS-TV executives explained the premise of the show and CBS’ aims for producing high-quality drama after a short read from Diana Lynn and Charlton Heston wearing an eye patch from the premiere episode called “Forbidden Area.” Heston jokes about the patch before handing off to CBS executives. Stars and directors of upcoming episodes on “Playhouse 90” appear to introduce their upcoming shows and plug performances. Young directors and writers like John Frankenheimer, Ralph Nelson, and Rod Serling explain their hopes for the show before the promo goes on to other performers, some reading straight from cue cards, others ad-libbing, describing the productions in which they appear. Such stars as Jack Palance, Heston, Keenan Wynn, Ed Wynn, Eddie Cantor, Tab Hunter, Vincent Price, Charles Bickford, Victor Jory, Kim Hunter, Frank Lovejoy, Mona Freeman, Peter Lorre, and Boris Karloff sell “Playhouse 90” as upscale entertainment for thinking adults. Lorre jokes with Karloff about not being able to kill or cut people, but just cut fabric in his upcoming episode of the series.

A moving episode of “Playhouse 90” followed, a dark adaptation of “The Days of Wine and Roses” featuring powerful performances from Cliff Robertson and Piper Laurie as two alcoholics trying to get their lives on track. The episode featured explicit subject matter and lines, unbelievable for the time. The two stars actually appear to descend into degradation in order to find that next drink. Once again, elaborate lighting and moving camera add emotional weight to the proceedings.

The second program of the day featured a wide variety of silent one-reelers restored for the screen, along with excerpts of what survives of the 1928 feature “Beware of Married Men,” starring a very young Myrna Loy. Two shorts kicked off the program, both featuring unknown Raymond Gallagher and cute comedy ingenue Billie Rhodes. “The Frame-Up on Dad” (1915) revealed the young couple secretly getting married to prevent his father from marrying him off to the unattractive neighbor next door, with Billie dressed in drag as a fellow young man. “The Brotherhood of Man” (1912) showcased early Chicago and starred Kathlyn Williams and William Duncan, with Duncan finding his old wrestling instructor homeless and struggling on the street and determined to do something to change it. 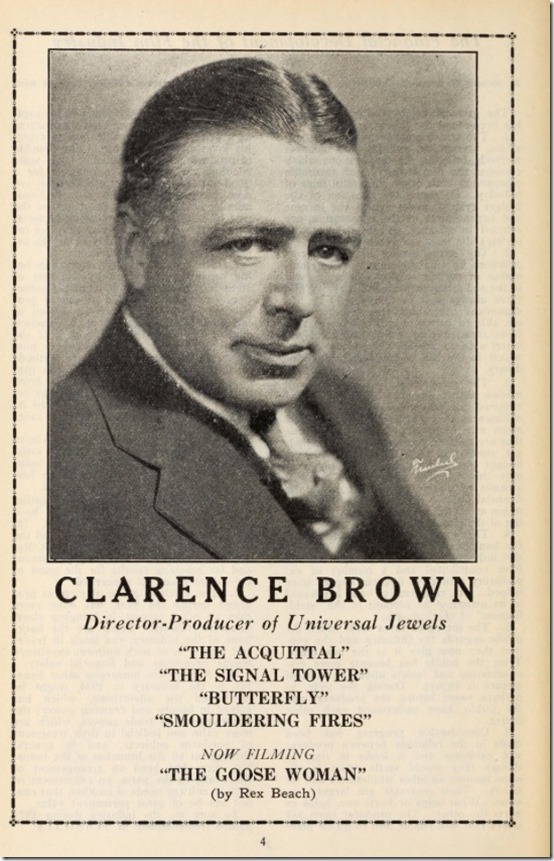 “Across the Hall” (1916) followed, with two young married couples (Gallagher/Rhodes and Neal Burns and Ethel Lynne” finding disagreements among themselves and their neighbors across the hall, as pandemonium ensues. UCLA caught this one just in time before it dissolved, with half of the footage very soft or even almost white. Filmmaker Al Christie makes a surprise appearance as someone the husband calls. “The Time-Lock Safe” (1910) featured performances from Owen Moore, J. Farrell McDonald, and King Baggot as an office staff and couple going to great links to find a lost child. “The Hobble Skirt” (1910) featured a hilarious performance from Ben Turpin, who dresses in drag to confuse people at a theatrical fundraiser before leading them on a chase through a Chicago neighborhood. The Imp logo appeared several times as a way to prevent competitors from stealing footage in the film.

Comic Larry Semon directed the 1916 “Captain Jinks’ Evolution,” with a wife frustrated by her milquetoast husband seeing his transformation after an injury into a bullying abuser and he-man, before returning to his staid self after an automobile runs into him. #metoo before there was #metoo. Maurice Costello directs himself, Kate Price, and others in the 1913 film “The Sale of a Heart,” a tale of an artist and his maid saving a woman from marrying a bigamist.

Concluding the program was what remains of the 1928 feature “Beware of Married Men,” in which an enraged Irene Rich intends to capture oily Stuart Holmes in the act of cheating on his wife, and misidentifications and hilarity ensues. Myrna Loy and her empty-headed detective Clyde Cook search out her husband and his shenanigans, while Rich and her boss Richard C. Tucker also look for the goods on the philandering Holmes. At the conclusion, Rich and her friend exit an apartment building and look across the street at what appears to be the original Hollywood Public Library on Hollywood Boulevard. Cliff Retallick accompanied the films.

After lunch, the festival screened restored episodes of an original KABC program called “Stars of Jazz,” a local Los Angeles show that began as a summer replacement and ended up showing around the country thanks to its outstanding music and production values introducing jazz to the masses. A dapper Bobby Troup served as narrator, introducing performances by such acts as the Modern Jazz Quartet, Max Roach Quintet, Light House All Stars, Julie London, Count Basie and His Orchestra, and Joe Williams, with audio pulled from high quality performances and married to the “Stars of Jazz” video. Once again, lighting and camera work were magnificent, with hand-held and tracking cameras focusing on the hands and instruments of the musicians, especially those of drummers, guitarists, bass player, and pianists. These closeups featured moody and expressive lighting and effects that added emotional value to the show, becoming as artistic as the music performed by these swinging artists.

That night I attended the screening of the 1925 Universal feature “Smouldering Fires,” directed by the talented Clarence Brown before he left to join MGM. Retired UCLA archivist Robert Gitt gave a presentation describing the history of the production and how it came be preserved before the feature began. Starring the likes of Tully Marshall, Malcolm McGregor, Laura La Plante, and the powerful Pauline Frederick, “Smouldering Fires” revealed the hardened Jane Vale running her family’s factory under the motto left behind by her father, “Let No Man Be Necessary to You.” When young, attractive Robert (McGregor) introduces new strategies and saves the reputation of Vale, she lets down her guard to fall in love. Her gorgeous younger sister Dorothy (La Plante) arrives home from college, drawing Robert’s interest. Which member of the romantic triangle will find torment? Gorgeous cinematography and location work in Yosemite complement the wonderful acting. Retallick also accompanied the film.

Classic film lovers salute UCLA and its partners like the Packard Foundation, Film Noir Foundation, and individuals for restoring and making available forgotten classics, rare programming, and damaged movies to the general public.