Directed by William A. Wellman.

“Other Men’s Women” is available on DVD from Warner Archive in Volume 3 of “Forbidden Hollywood.” 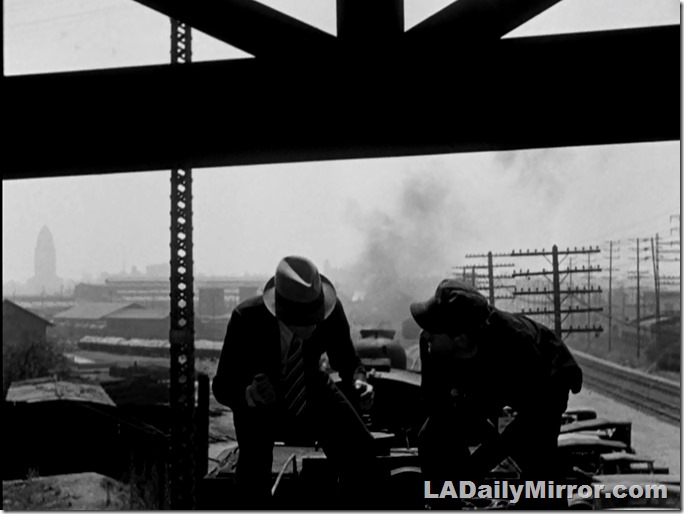 I ran this movie because it checked several boxes for me and the Brain Trust: Railroad movie? Check. Mary Astor movie? Check. Amputee from presumed railroad accident? Check.

But mostly I did it because of this shot (contrast adjusted to show the background), coming into the rail yards in Los Angeles, with City Hall on the skyline at left. Did they really shoot it on top of the train?

Yes, they did. Here’s Regis Toomey and Grant Withers on a railroad car as proof.

“Other Men’s Women” began life as “Steel Highway,” and was cast with James Hall, Grant Withers and Marion Nixon. Regis Toomey and Mary Astor were signed for the movie in July 1930. 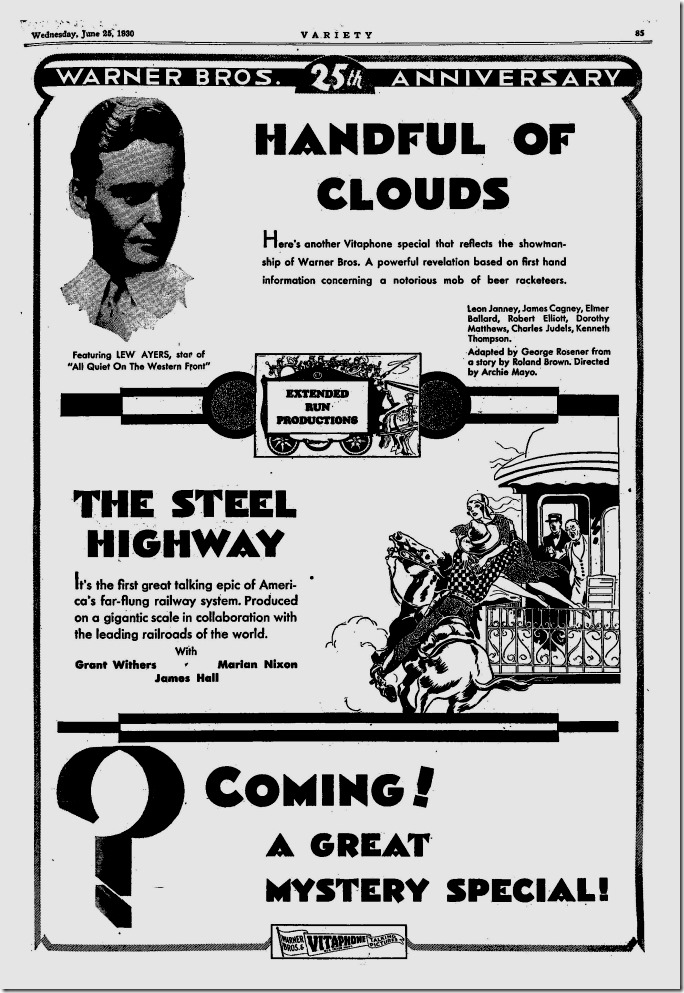 When Warner Bros. titled this product “The Steel Highway,” they planned to make a railroad story, but “The Steel Highway” is a powerful domestic drama, gripping from start to finish, with the railroad merely a background. It is a drama of great power, highly interesting and fascinating.

Mary Astor reveals herself as an actress and Grant Withers is just as strong in his role. Regis Toomey, who can laugh and at the same time give you a catch in the throat, does his bit in making “The Steel Highway” one of the best railroad pictures of all time.

Better than the usual program fare. It should prove generally pleasing to family audiences. Because it is well cast and the actors get the most out of their roles, the picture stands out a bit more than does the average program picture. The director has succeeded in getting a great deal out of the story.

“Other Men’s Women” adds another item to the list of tawdry and misleading titles with which certain of the bright young men of Hollywood have sought to woo the mystical box office this season. The film which it designates, now on view at the Warner Theatre, is an unimportant little drama of the railroad yards, rendered pleasantly enough by Grant Withers, Mary Astor and Regis Toomey. If nothing else, the picture represents a triumph for the Warner rain machines, which deluge the screen with profuse and workmanlike raindrops for the latter half of the story. There may be a legitimate doubt as to the dramatic integrity of the plot, but no one will deny the high quality of the rain.

Certain persons who wish to remain anonymous asked for a “railroad movie,” so here it is. For Monday, we have a mystery locomotive.

Also for Monday, we have two mystery women. They do not approve of such goings-on.

Update: The landlady on the right is Lucille Ward with an as yet unidentified companion.

Update: This is J. Farrell MacDonald as Peg Leg.

For “Hm Wednesday,” we have a mystery waitress. Our leading man has been cropped out due to insufficient mysteriousness. He will appear Friday.

Update: This is Grant Withers (now uncropped) and Lillian Worth. 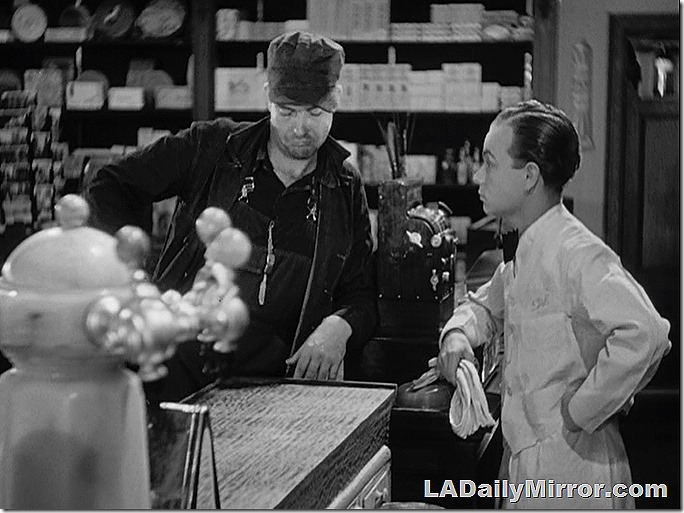 We also have a mystery clerk. The leading man has been cropped out again because he lacks mysteriousness.

Update: This is the now uncropped Grant Withers and an as yet unidentified clerk. 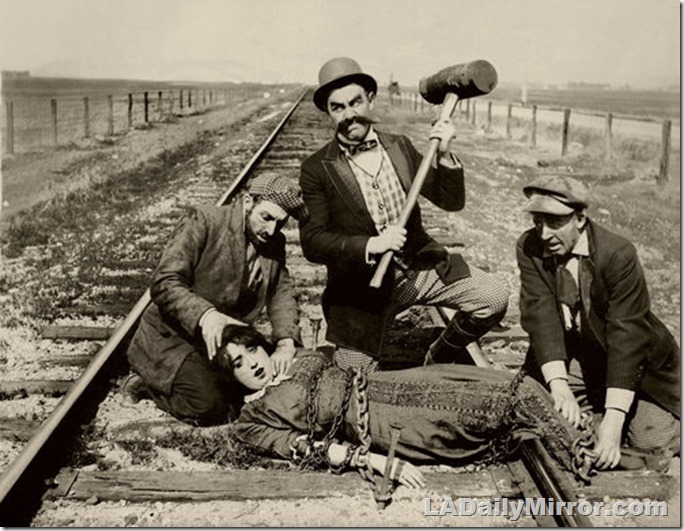 We also have….. no wait, that’s another railroad movie….

Update: This is “Barney Oldfield’s Race for Life,” in which Mabel Normand is tied to the railroad tracks by Ford Sterling and Raymond Hatton.

And finally, we have these mystery gentlemen. And as incredible as it may seem, they do not approve of such goings-on.

Update: This is Kewpie Morgan, left, and Fred Kohler. 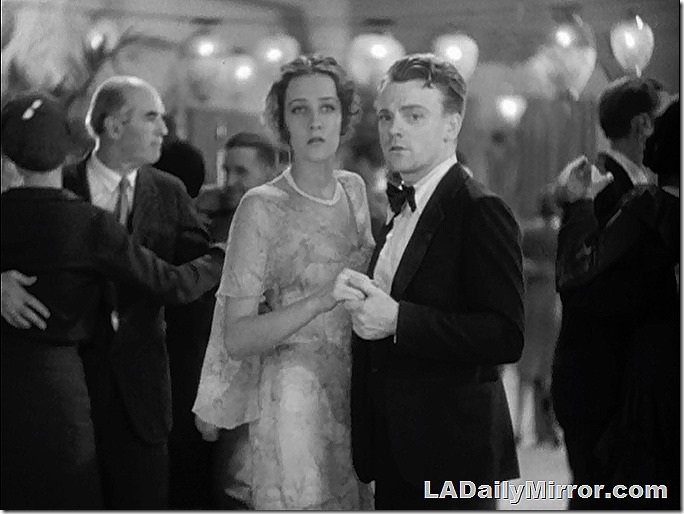 For “Aha Thursday,” we have this mystery couple.

Update: This is James Cagney, soon to star in “The Public Enemy,” also directed by William Wellman, and an as yet unidentified actress.

For Friday, we have a mystery leading man and a mystery woman who does not approve of such goings-on.

Update: This is Grant Withers and Joan Blondell.

Then our mystery leading man has a mystery companion – and let me tell you, brother, he does not approve of such goings-on, either. At least they know how to wear hats!

Update: This is Grant Withers and Regis Toomey.

And here’s our leading man with another mystery woman who doesn’t approve of such goings-on. In fact, this movie is mostly about disapproved goings-on.

Update: This is Mary Astor and Grant Withers.