I usually don’t publish the crackpot comments I get about the Black Dahlia case, but the anniversary of the killing (Jan. 15) is bringing out more than the usual amount of crazy stuff. So I’ll make an exception for this message, which I received today.

BlackDahliaSolution.org was the work of John Frederick “Jack” Kohne Jr., who died in 2016 at the age of 83. And please note that I have a folder several inches thick of his material, as he wrote to me frequently using the fake name Jack Pico and the return address of the now-vacant Mailboxes, Etc. in San Diego’s Clairemont Square Mall.

You would think that someone with a purported IQ of 147 would spell my name correctly. Nope.

Pico/Kohne is gone, but he left as his legacy three terrible ideas that have gone viral over the years.

The first is the photoshopped newspaper front page that Pico/Kohne posted on his website. His bogus Page 1 of the Los Angeles Daily News is so popular that it’s been spread all over the Internet and frequently turns up in print. Graphic designers simply cannot resist the image, even though it’s fake. It’s simply too appealing.

The second: Kohne spent hours looking for “hidden” messages in the crackpot mail sent to the police and the newspapers after Elizabeth Short was killed. He made wild inferences and drew geometric figures between letters, eventually deriving the name “Ed Burns.” Kohne elaborated substantially on the fictional “Ed Burns” to the degree that some people believe there actually was an “Ed Burns” (Spoiler: No, he never existed) and that he was considered a suspect. (Nope, never).

Creating “Ed Burns” out of “hidden” messages in crank mail would be bad enough, but there is more. 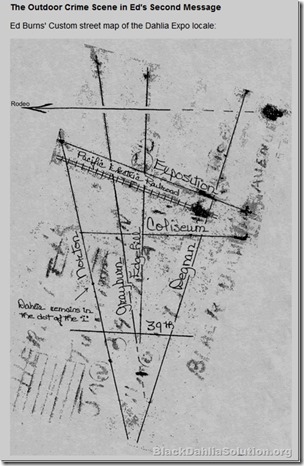 If this sounds at all familiar (and it should if you know much about the Black Dahlia case,) it is because retired LAPD Detective III Steve Hodel stole Pico/Kohne’s ridiculous idea and grafted it onto his own bizarre claims about his father, Dr. George Hodel.

If you think I’m kidding, there it is, at left: Kohne’s beautifully drawn but utterly crazy map – using one of the crackpot postcards sent to police and the newspapers, which he said “proved” that the body of Elizabeth Short was a pointer to Degnan Boulevard.

And no, Detective III Hodel has never credited Pico/Kohne with the idea. Steve Hodel claims he discovered it independently.

And to my correspondent, whom I’m not identifying: I know all about Jack Pico/John Frederick “Jack” Kohne Jr. He wrote to me all the time. I have a file 3 inches thick of his material. I’ve examined it thoroughly and it is the work of a madman. I get awfully tired of fighting the same old arguments over and over again.