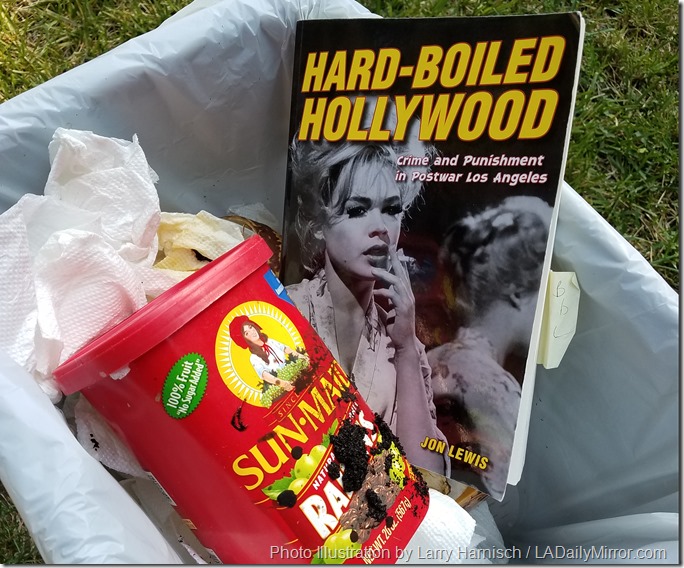 “Sometimes it’s interesting to see just how bad bad writing can be.
This promised to go the limit.”
— Joe Gillis, Sunset Boulevard

This dreadful book was recently left on my doorstep like a rather large, somewhat festering rat that had been dragged in by the cat. But calling Hard-Boiled Hollywood a dreadful book is an insult to all the other dreadful books in the world. Even “atrocious” isn’t enough. We could fire words at this book until the thesaurus was empty and still be grasping for ways to describe so much failure crammed into 199 densely written pages, plus endnotes and index. That’s right: no bibliography.

If Hard-Boiled Hollywood were from some fringe publisher like Feral House or Amok Books, we could shrug it off, but it was published by the University of California Press, which calls itself “one of the most distinguished university presses in the United States, [enriching] lives around the world by advancing scholarship in the humanities, social sciences, and natural sciences.”

2) Lewis says that he received a grant to study a decade of Los Angeles newspapers, but opens the first sentence of the first chapter with a stunning flub. He has the January 15, 1947, morning edition of the Los Angeles Examiner reporting the death of Elizabeth Short (nicknamed the Black Dahlia), whose body wasn’t discovered until later that day. Even crackpot authors John Gilmore (Severed) and Steve Hodel (Black Dahlia Avenger), both cited frequently by Lewis, don’t make clangers like that. (For the record, the next day’s issue of the Examiner — with the headline cited by Lewis, “Girl Tortured and Slain” — doesn’t even appear in the microfilmed edition. I posted it on my blog in 2003 in an image from EBay, with the perspective corrected, and it has since spread all over the internet). He also refers to the Los Angeles Mirror on the initial coverage of the Dahlia case — a neat trick, since the Mirror wasn’t launched until 1948 by the parent company of the Los Angeles Times as a challenge to William Randolph Hearst’s afternoon Herald-Express.

Maybe you think I’m being too harsh and too snarky, treating a small volume from an academic press like a summer popcorn movie that flopped. But Lewis isn’t some nut job accusing his father of killing the Black Dahlia; he is a purported academic who can’t manage a basic quote from Raymond Chandler, because he relies on a tertiary source, Otto Friedrich’s troublesome City of Nets, rather than going to Frank MacShane’s Selected Letters of Raymond Chandler. This is lazy research, unacceptable in an undergraduate paper and intolerable in a book with academic pretensions.

And there’s one thing we have here, it’s academic pretensions. Lurking beneath the Hard-Boiled Hollywood’s lurid cover (featuring iconic Gidget actress Sandra Dee tarted up and smoking a cigarette) is someone’s idea of a high-concept analysis, which tries to bookend an amorphous blob of film history and grisly murders with the deaths of Elizabeth Short (1947) and Marilyn Monroe (1962). It aspires to be a sort of Hollywood Babylon that academics can read without guilt — an odd niche that has already been filled by City of Nets. Unfortunately, the dubious premise, the dismal research, and the stiff academic writing make it utterly unreadable. Sample:

The long and inconclusive investigation into Short’s murder foregrounded a revised mythology of Hollywood aspiration and stardom. It introduced an unglamarous Hollywood narrative focused not on discovery and transcendence but on the cruel realities of life as it was lived by aspiring film workers after the war.

Mother of God, was that written by a human being or an obfuscation algorithm? In case you’re wondering, in one online test, that excerpt scored a Flesch Kincaid Grade Level of 17.12 and a Gunning Fog Index of 19.60.

I have no idea whether Hard-Boiled Hollywood is simply a punched ticket in the publish-or-perish merry-go-round of academia or whether it represents a life’s work. But it is an insult to those of us who take research seriously, who are cautious about our sources, and who treat our subjects with a fair amount of care, rather than as so much blank plaster to be wallpapered with snippets of Mike Davis, Kevin Starr, and Nathanael West, along with references to Sunset Boulevard, In a Lonely Place and The Big Knife.

There is no point in drowning a rat that is already dead. This book is a Did Not Finish, Could Not Finish, Will Not Finish. The biggest unsolved crime is how something as terrible as Hard-Boiled Hollywood managed to get through the publication process at the University of California Press. To be sure, Lewis’ name is on the cover, but the people who green-lighted this book bear at least half the blame for not ensuring a better result.

In Sunset Boulevard, struggling screenwriter Joe Gillis thought it would be interesting to see just how bad bad writing could be. That didn’t end well for him — and it doesn’t end well here.

7 Responses to Black Dahlia: ‘Hard-Boiled Hollywood’ and the ‘Blah Dahlia’