Unless you prowl the outer fringes of the publishing industry, you may have never heard of Lily DuTertre, who is an avid compiler of “high quality Wikipedia articles” into books. Like this one on unsolved murders, selling for $26.68. 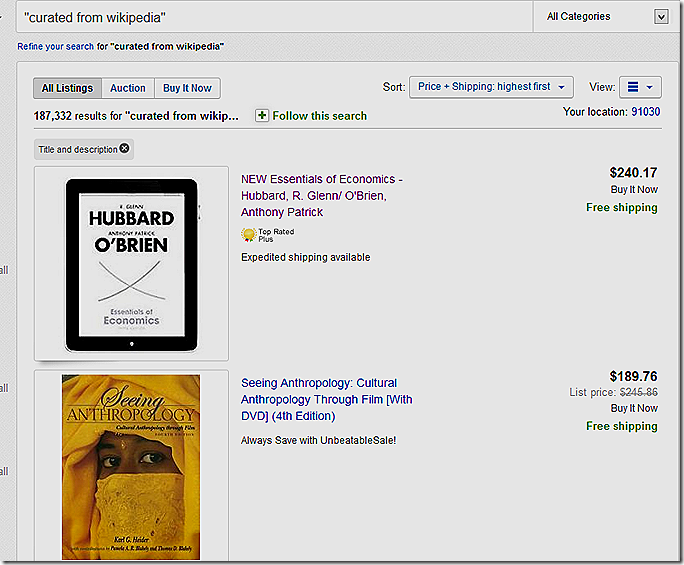 “Curating” books from Wikipedia appears to be a popular trend, judging by the 187,332 hits on EBay. A little research reveals that the main offender is some outfit called Hephaestus Books, with 145,941 hits. 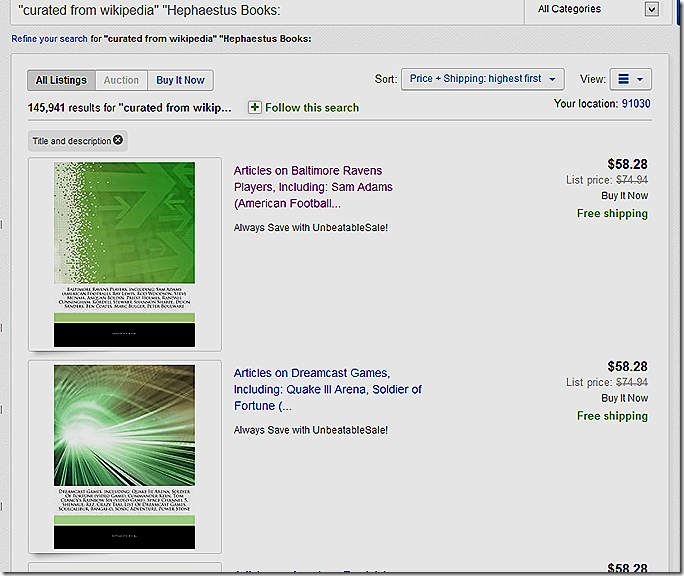 Who wouldn’t want to pay $58.28 for some regurgitated Wikipedia stories about players for the Baltimore Ravens? 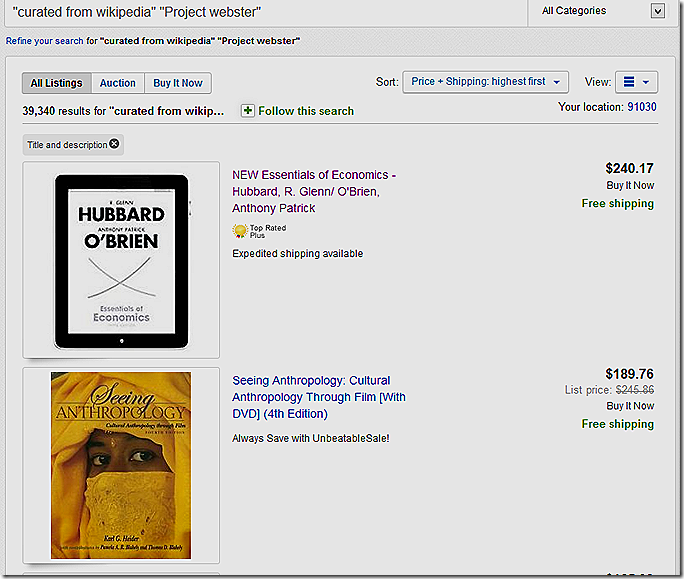 Project Webster has fewer offerings, but takes the prize for audacity: $240.17 for articles dredged from Wikipedia? That takes some brass. 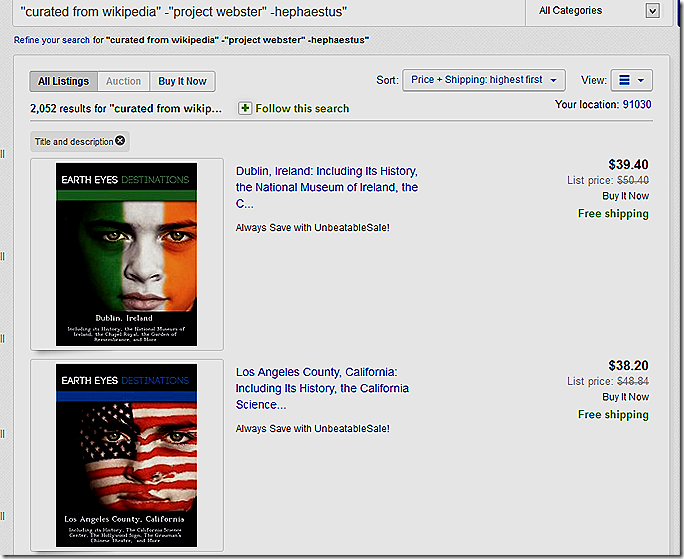 And when we eliminate Hephaestus and Project Webster from our search, we find a relatively paltry 2,052 entries left, all of them in the “Earth Eyes” series, from …

… well, actually, it’s not clear whom they are from. Here’s 153 entries from the prolific author Sandra Wilkins.

And here we have 433 entries from the apparently ambitious Jonathan Black…. 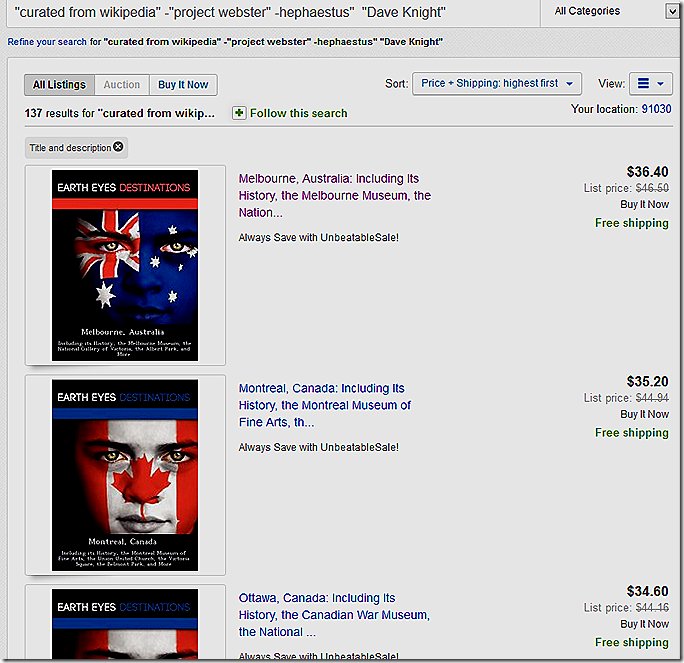 What future scholars will call the Dave Knight canon (137)….. 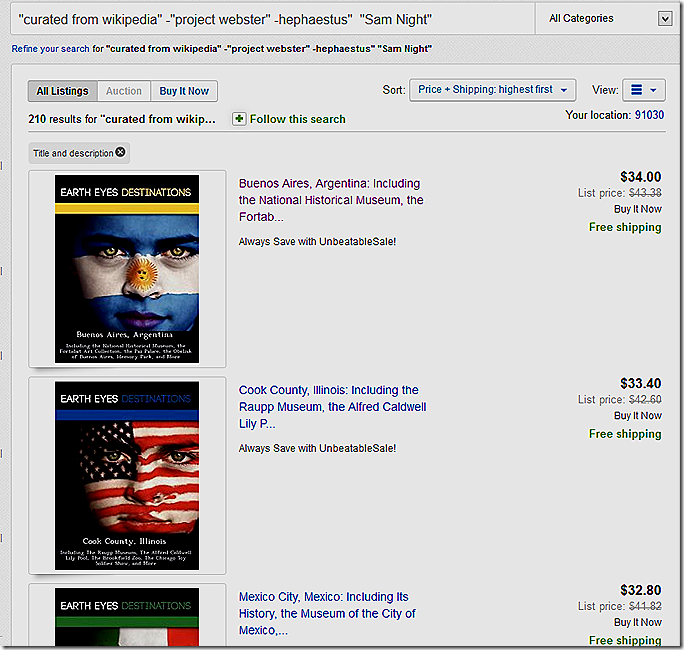 And in some cases, the author is basking in anonymity.

Which brings us to the literary oeuvre of Lily DuTertre, published by Bibliobazaar…

Lily is no slouch when it comes to cranking out books scraped from Wikipedia. She has 71 entries on EBay, focusing on the darker moments of the human experience (unsolved murders, epidemics, conspiracies, etc.) but she occasionally branches out to works about cats, religious symbols, music, the Bay Area, handwriting analysis and Christmas traditions around the world.

I’m sure each one is fabulous, at least judging by the publisher’s description of her book on unsolved crimes:

Countless of horrible crimes are committed every year, and in most cases, investigators are able to bring the perpetrators to justice. Some crimes, however, remain unsolved. These are the stories of men, women, and children whose deaths remain a mystery.

Keeping up a prolific pace, laboring all the while without making it into WorldCat. 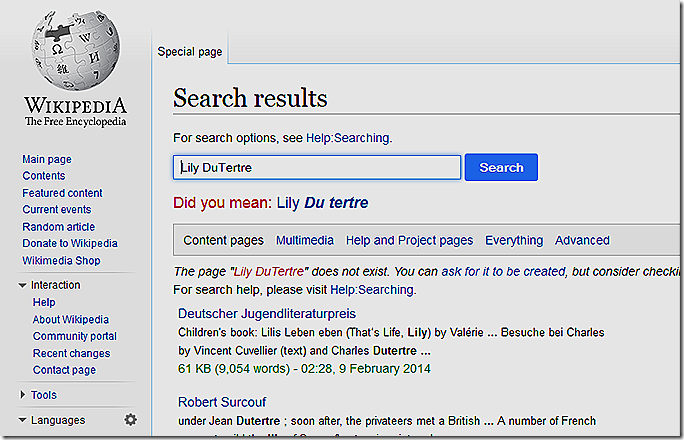 No, not even a Wikipedia page. Oh, the humanities!