Eurasian Held on Suspicion of Being Japanese 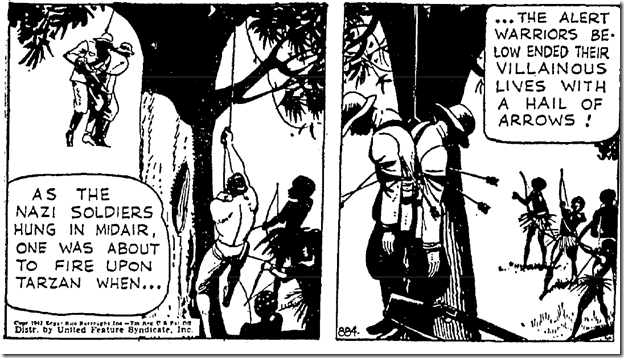 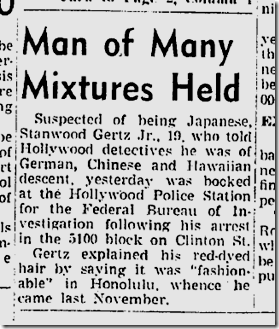 June 23, 1942: Meet Stanwood Gertz Jr., who was arrested because he was suspected of being Japanese. Gertz told detectives he was German, Chinese and Hawaiian – and his dyed hair presumably made him even more suspicious.

The Times never followed up on the case of young Mr. Gertz, which it called a “man of many mixtures,” but we have Google. Let’s see what we find.

The website japaneserelocation.org provides a few details. A man named Stanwood Gertz is listed as being born in 1921, which would have made him 20 or 21, not 19. He’s listed as Japanese and white, and apparently was sent to Heart Mountain, Wyo. Notice that he’s a college graduate.

In 1943, he apparently tried to enlist in the Army and eventually served. And that’s about all I can find.

“This Gun for Hire” is coming to the Paramount in Hollywood and Downtown.

Tom Treanor, who was killed covering the liberation of France, describes a trip in a cargo plane to an undisclosed destination, just him and a large piece of machinery that he’s forbidden to identify.

“I have taken five life preservers off the wall and I lie on them hour after hour,” he says. “There are only three things to look at outside the plane — the clouds above, the clouds below and the water below the lower clouds, which is a different color every few minutes.” 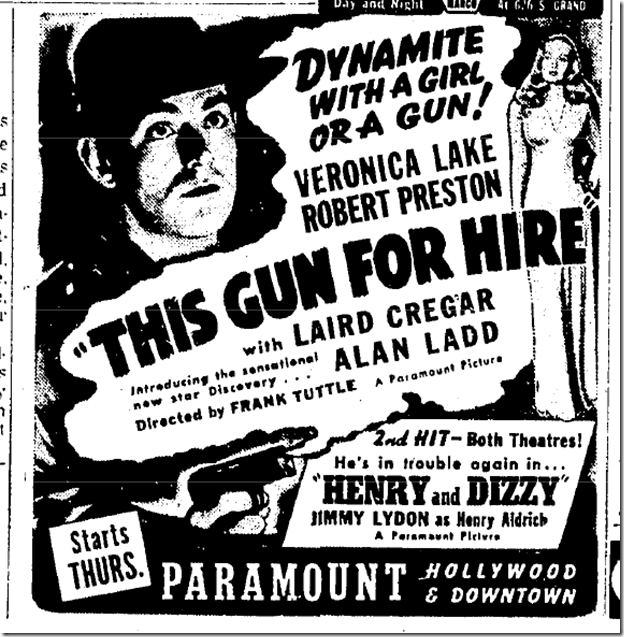 I am retired from the Los Angeles Times
View all posts by lmharnisch →
This entry was posted in 1942, Art & Artists, Comics, Film, Hollywood, Tom Treanor, World War II and tagged 1942, Eurasians, film noir, This Gun for Hire, World War II. Bookmark the permalink.

1 Response to Eurasian Held on Suspicion of Being Japanese