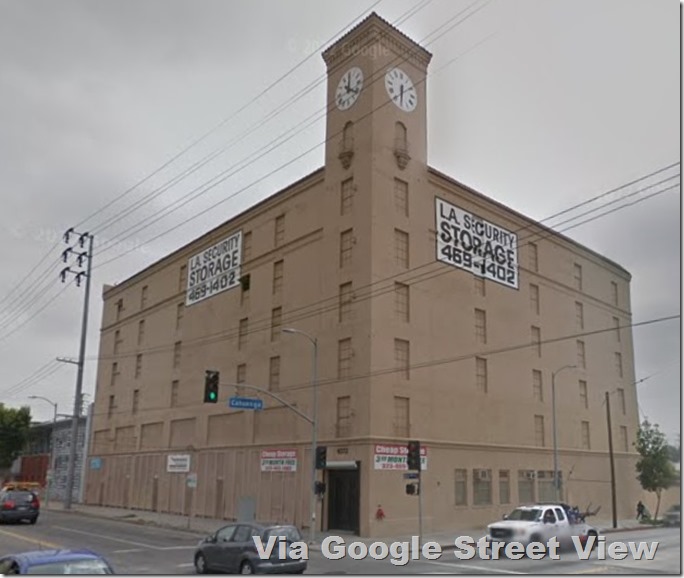 A landmark both as one of the first buildings in the original Cahuenga Valley area known as Colegrove and for its dramatic appearance looming over the intersection of Santa Monica Boulevard and Cahuenga Avenue, what is now the L.A. Security Storage Building still serves as one of Hollywood’s major storage facilities 100 years after construction. The building stands over what was once Buster Keaton’s studio and a prominent entertainment district, demonstrating the durability of Hollywood and its connection to film and other popular entertainment.

The site occupies what was originally part of Rancho La Brea, 4444 acres given by Mexican governor Jose Maria de Echeandia in 1828 to Antonio Jose Rocha and Nemesio Dominguez. Forced to defend and file claims to the land, Jose Jorge Rocha deeded the rancho land to Henry Hancock, the family’s surveyor and defender, in 1860. Hancock and family later subdivided and sold the property, with former Republican Sen. Cornelius Cole purchasing 500 acres in 1880 and establishing what would become known as Colegrove.

The storage building appears in the background of this scene (upper left corner) from Buster Keaton’s The Balloonatic.

Cole gradually sold off land to create his small community, which gained its name after the erection of its post office. Many purchasers were Americans looking for a new start, moving west from the American heartland, looking to farm as they had back home. The Cahuenga Valley in which Colegrove sat featured rich, fertile land in what was known as the frostless belt. Crops such as melons, nuts, and particularly citrus grew well. Most of the farmers and ranchers turned to citrus, mostly lemons, thanks to its successful growth.

As more turned to the profitable crop, the community required a packing house to grade, cure, and pack lemons. Turning to the Lemon Growers’ Exchange of Ontario and its’ bylaws and constitution, the farmers decided to form their own organization following these documents. On August 24, 1895, the group adopted the name Cahuenga Lemon Exchange in which to do business.

Cahuenga Valley residents of Colegrove met September 19 of that year to officially vote on organizing the venture “to greatly promote the general prosperity of the charming suburb of the Los Angeles city,” as the September 22, 1896, Los Angeles Herald stated. After several meetings to discuss how to organize and operate, the group officially voted to incorporate the group, with E.C. Harrington, Cole, P. G.Durly, F. M Lyon and Dr. Thomas Davidson voted as directors.

Filing their article of incorporation on December 3, 1896, the group turned to raising $20,000 in capital on which to operate. Cole sold them part of his subdivision for $300 on February 17, 1897, and the group constructed a packing house at what is now Santa Monica Boulevard and Cahuenga Avenue. The 70-member group shipped 40 railroad car loads of lemons in 1900. In 1901, the organization shipped 16 railroad car loads of lemons, over 4 million pounds for sale around the country. In 1905, the busy packing house employed 20 to 75 men, over ten percent of the 500-resident community.

By the 1910s, small film studios arose in the area, particularly the Mutual Film Corporation, organized in March 1912 on the block just south of the building. Charlie Chaplin produced films out of the studio as the Lone Star Film Corporation in 1916 and 1917. Keaton ran his self-named company here at Eleanor Avenue and Lillian Way beginning in 1922. During those early months, the packing house appeared in the background of his two-reel short films The Scarecrow in 1920 and The Goat in 1921.

Hollywood and surrounding areas like Colegrove grew in population in the 1910s and 1920s as the silent film industry moved west from Fort Lee, N.J., to establish headquarters, and home construction boomed. With increasing construction, more storage space was required by businesses and residents. Large storage facilities were erected to handle these materials.

Looming over the surrounding community at six stories, the building also featured two gigantic electric Seth Thomas clocks, giving it the name “The House With the Clock” in advertising. The dials measured 16 feet in diameter, the minute hand stretched eight feet and weighed 750 pounds. It never struck the hour to keep neighbors happy. The building appears in the background of a scene in Keaton’s The Balloonatic.

Quickly filling up space, the company pulled permits in December 1924 to add another six-story building to the east which would adjoin the current one, creating over 810,000 cubic feet of storage space between the two. The company added its own truck line to transfer goods to San Francisco, San Diego, and even across the United States. General Manager Rodney Spriggs decided to help promote the building in 1925 by hosting the Hollywood Mercantile and Industrial Exposition in the facility. Not long after the company began renting storage to film companies.

In 1928, the company merged with the larger Lyon Storage and Moving Company, with the facility renamed after Lyon. Because of its location, they reached out to film manufacturers. King Charney served as distributor for the Agfa Ansco Corporation out of one of the first floor stores of the building. In 1939, Gevaert Film opened shop in the facility as well. Storing nitrate film wasn’t always safe, however, especially in long, hot periods. On July 31, 1954, nitrate film exploded in the private ninth floor area rented by producer Boris Morros. Television shows like Inner Sanctum went up in flames as part of the roof ripped off the building and remains of film and concrete were found blocks away. Newspapers reported that this was the third such blast in twelve days, thanks to multiple 90+ degree days in facilities that were not air conditioned.

LA Security Storage became owner of the building in the early 1980s and remains so today. This well constructed, reinforced building celebrated its centennial in 2022, operating as a storage facility for its full 100 years. A landmark in survival as well as location, may it continue to stand for another 100 years.