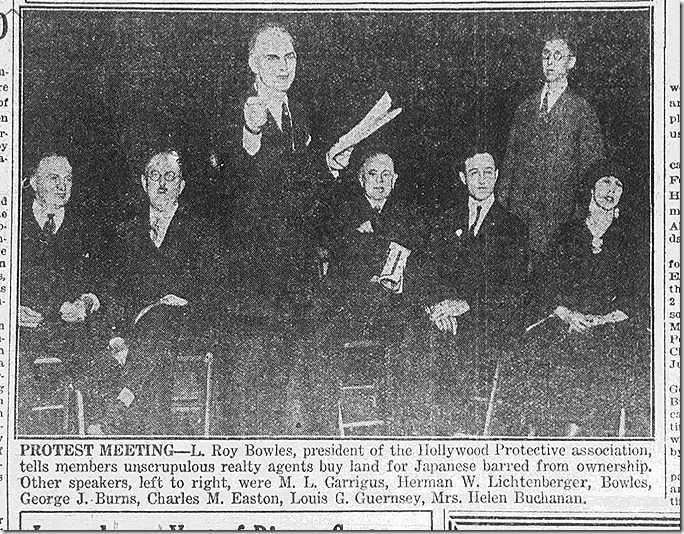 As many immigrant groups before them, Japanese began coming to America in the 1860s looking for opportunities to learn new skills and to make money to help support their families back home. When intolerant, isolationist Americans began turning against the Chinese, Japanese began taking their place as menial workers, with most settling on the West Coast. Many discovered they liked the country and set down roots. As time went by, however, white Americans turned their frustrations on them as well, blaming others for their own problems. A group of Japanese Americans in 1923 Hollywood fought prejudice in attempting to construct a church, finding their “otherness” breeding bitterness and resentment in certain Hollywood residents.

Japanese battled hardships for decades after arriving in the United States and the West. In 1869, a small group of Japanese settled in El Dorado County to establish the first agricultural settlement, becoming the Wakamatsu Tea and Silk Farm Company per scholar Donna Graves in “Japanese American Heritage and the Quest for Civil Rights in Riverside, California.” Two men ended up in Los Angeles as well, working as servants.

Most Japanese immigration was restricted until 1884 when Hawaiian sugar plantations reached an agreement with the Japanese government for workers. Many of these men began coming to the United States mainland to work building railroads and other large infrastructure projects after the passage of the Chinese Exclusion Act in 1882, with some becoming domestic workers as well. Some turned to agriculture after several years, carrying on family traditions or enjoying working on the rich, fertile land. They focused on perishable vegetables and produce like strawberries and flowers,

Most Japanese settled near downtown Los Angeles in the late 1800s, establishing a small neighborhood of stores, businesses, and homes, per SurveyLA’s “Japanese Americans in Los Angeles, 1869-1970.” Many men lived in boarding houses run by day work employment agencies, since city statutes forced them to live near retail and commercial areas. Graves also discovered that some Japanese established restaurants, furniture stores, and floral shops. In the early 1900s they also began working on farms and eventually leasing and then buying land around the city on which to grow their own crops.

By the early 1900s, however, many Californians sought to deny new Japanese Americans rights and privileges. In late December 1912, state Sen. J.B. Sanford (D-Ukiah) reintroduced his alien land bill against the Japanese, which had failed three previous times. It would prevent new Japanese immigrants from owning land. As Sanford told the press, “The amount of land owned by the Japanese is alarming. They are entering every avenue of business and crowding out white people… Once they get in you can never get them out. Land where they buy deteriorates, and they buy cheaply.”

President Woodrow Wilson, however, urged defeat of the anti-alien law, as did other officials, who pointed out that many English and Scottish immigrated to the US with no intention of becoming residents but that they were allowed to purchase land. California passed a version of the bill in 1913, later adding statutes forbidding Japanese to lease land or even work certain professions. Farmers and ranchers opposed the bill, desperately in need of the Japanese workers to harvest the food and fruit which fed the country.

As in downtown Los Angeles, most worked as domestic workers, gardeners, and day workers, listing themselves in the city directory as such. Many worked through day work companies located on Cahuenga Avenue near Selma like the Sunset Day Work Company, the Cherry Day Work Company, and the Hollywood Japanese Employment Company, whose buildings often functioned as boarding houses as well.

By 1910, the year Los Angeles annexed Hollywood, the Japanese population in Los Angeles surpassed that of all other California cities. Women began coming as picture brides, helping establish families and communities in places like Hollywood. Mulcahy writes, “In 1910 several Japanese people purchased about 10 lots in a new tract on the 1300 and 1400 block of Tamarind Avenue. Between 1911 and 1914, they built small, wooden frame homes generously set back from the street.” Others settled on Selma Avenue just off of Cahuenga, establishing their own commercial district in the 1500 block of Cahuenga, where many single men lived in boarding houses.

As the film industry exploded, so did the population of Hollywood. The new Japanese residents served the public through their markets, floral shops, and businesses on Cahuenga, provided guest assistance in places like the Hollywood Hotel, and maintained the homes and gardens of wealthy residents along the foothills off Franklin and ritzy Prospect Avenue (later Hollywood Boulevard). They lacked the rights and benefits of those they served however.

Many day workers ran into trouble in 1912 when they attempted to raise their hourly rates 5 cents for the long and backbreaking work they performed; prosperous white housewives protested and forced down the raise. In 1920, a boarding house at 1516 Cahuenga was demolished, called an “eyesore” in desperate need of improvement. That year, Democratic state Sen. James D. Phelan ran for reelection, running some ads stating that he would “keep California white.”

The small Japanese enclave on Tamarind Avenue with residents like Sanzo Yamamoto, Hirashi Suzuki, and Frank Tokichi Aiso (Mulcahy and McAvoy) lived quietly and peacefully, surrounded by white residents. There were some heated moments, but not until 1923 did boiling anger explode.

At a May 1 meeting at the Hollywood American Legion, former Massachusetts’ Republican Sen. George J. Burns threw his support behind the 300 member group and hurled sarcastic insults, calling the Japanese a “menace.” H.J. Biller from the Pico Heights Protective Association proclaimed that the Japanese were kept out of his neighborhood, forcing them to move out and whites holding their ground.

May 18 papers related the twisted, hateful attitudes and actions pulled by members of the Association protesting the church. Some carried or posted signs with ethnic slurs, stating “We Don’t Want You Here: This is a White Man’s Neighborhood.” Mrs. J. O. Poole, who lived at 1440 Tamarind Avenue, called the signs the first step “to force the removal of the Japanese” who were using the residence as a church. She proudly stated that the Ku Klux Klan had sent letters supporting her stand.

The association protested in front of Judge Crail and the City Council, joined by the Native Sons of the Golden West, demanding the shut down of the worship service and preventing the Japanese from building a church at 1435 Tamarind. The City Council agreed, following the recommendation of the public welfare committee, noting that the permit was void because work had not started within the time specified. It appears the Japanese properties were condemned as well.

The group continued their protests against Japanese moving into Hollywood, claiming in January 1924 the Japanese were “invading” Hollywood and other cities as more than 185,000 acres of San Joaquin and Sacramento Valley lands were turned over to whites. Trying to prevent Japanese and other ethnic groups from moving into white enclaves, the Los Angeles Realty Board had recently passed a statute “that property in sections of the city, now inhabited by Caucasians, will not be sold to members of other races.”

Within a few weeks, the protective association demanded the City Council turn down the proposal to move a small apartment house across Bronson from Le Compte Junior High School to house Japanese families. On February 15, 1924, they wrote a letter to the Hollywood Daily Citizen, calling themselves “true Americans…for America first, California, Hollywood, and clean citizenship.”

While the group appears to have disappeared, others sadly sprung up in its’ place, further harassing and attacking residents of Japanese ancestry before the start of World War II. The Japanese Americans were forced into concentration camps in 1942, not receiving an apology and reparations from the United States government until 1988.

Hatred against Asian Americans has unfortunately once again raised its head in this country, as many listen to demagogues preaching hate and disinformation. May we awaken in time before repeating these horrible and tragic events.