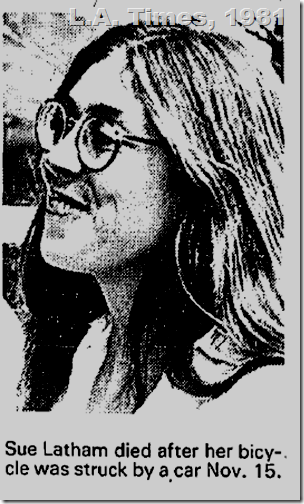 Note: This post has been getting a lot of traffic recently and I couldn’t figure out why. The answer:  A biking blog linked to the post a few days ago because Pat Hines, one of the victim’s friends, has been in the news. I originally wrote the blog post about the Nov. 15, 1981, incident in 2005 for the 1947project.

Sue was 29, tall, blond and athletic with dimples every time she smiled—her big, clunky glasses the only thing that might betray a degree in quantum mechanics—when she left her husband in Austin, Texas, and a job writing for scientific journals, found an apartment right below the Hollywood sign and began turning out screenplays. She had just finished “Death in New Venice,” about a female detective.

Early one morning shortly before Thanksgiving, while it was still dark, she parked her Mercedes at Gladstone’s, 17300 Pacific Coast Highway, the usual gathering spot for the Santa Monica Swim Club, which was planning a bike ride up the coast to Point Mugu.

Some swim club members avoided this newcomer, who had arrived in Los Angeles two months before, because she seemed unsophisticated and took risks that weren’t appropriate for life in a huge city. “Her eyesight wasn’t that great, she’d never lived by the water and here she was swimming before sunrise in the cold ocean,” said Richard Marks, one of her friends.

A neighbor found her four miles north of Gladstone’s, badly injured and naked from the waist down, in the rubble of a construction site at 20800 Pacific Coast Highway, next to her silver Motobecane. She died two days later without regaining consciousness.

California Highway Patrol investigators said that she was apparently kneeling on the side of the highway, trying to unjam the gears on her bike, when a motorist hit her, throwing her 15 to 20 feet in the air, causing massive head injuries and leaving a pool of blood on Pacific Coast Highway. Whoever hit her dragged her to the construction site and partially undressed her to make it appear that she had been raped, and then made a second trip to get her bike, the CHP said. Because she was nearly 6 feet tall, investigators said it might have taken two people to drag her to where she was found.

Her family and friends from the swim club helped collect a reward for information in her death and persuaded a billboard company to donate space for signs along the highway. Nothing came of it; 24 years later, the death of Sue Latham remains a mystery.

I am retired from the Los Angeles Times
View all posts by lmharnisch →
This entry was posted in 1981, Cold Cases, Crime and Courts, Film, Hollywood, Sports, Transportation and tagged 1981, bicycling, Cold Cases, Pat Hines, sports, Sue Latham. Bookmark the permalink.