Los Angeles has led the way in the evolution of shopping and markets, thanks to its fascination and acquisition of vehicles. Originally simple stores in the heart of a community allowing either easy pedestrian access or location adjacent to streetcar routes, popularity of automobiles transformed the very concept of markets. 960 Vine St., a grocery/market for virtually all of its 93 years, reveals how businessmen chased car owners to sell their wares. 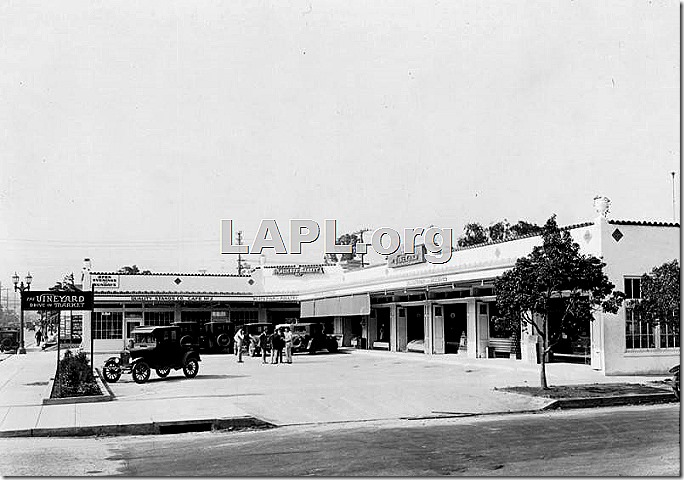 The Vineyard Drive-In Market in 1927, from the Security Pacific Bank Collection, via the Los Angeles Public Library.

The January 23, 1927, Los Angeles Times reported the Richardson Company market as the second drive-in announced for the area, seeing increased construction and newly laid concrete streets. Sitting back from Vine Street almost 40 feet allowed twenty parking spaces for automobiles to be added in front of the building. The developers named their attractive one-story market “The Vineyard” to appeal to upscale shoppers, employing concrete, brick and steel in construction.

Breaking ground in early March, the Vineyard beat the other market to construction, becoming the first grocery and open-air market on Vine Street. To make it more attractive to consumers, developers added a 12-foot canopy providing shade and protection to automobiles. Owners pulled a permit on April 23 to add an illuminated neon sign with gas-colored lights on their roof garden to enhance visibility at night.

The Richardson Co. sold the market to John Del Zoppo, who operated a variety of businesses inside the structure. The proprietor quickly made alterations, slightly reducing the size of the market by adding partitions to operate two other businesses inside the building. Besides the market, Del Zoppo opened a hardware and Hollywood Lawn Mower stores, a one-shop shop for those looking for products to enhance their homes. The Vineyard Market thrived as automobile ownership increased, with Del Zoppo running ads in 1931 looking for $25,000 in order to expand his business.

In 1933, however, Del Zoppo sold the structure to C.A. Gaines, a former fruit representative from the Fresno area as elaborate new supermarkets lured customers away. The new proprietor pulled permits to install glass front windows to enhance cleanliness for display products inside the market. Glass partitions/windows featured art tile at the ground adding another elegant touch. Gaines replaced the neon sign with a rotating one, hoping to further attract attention to those driving by.

Gaines struggled for a couple of years before selling the market to Louis Nathan in 1935. The new proprietor changed the name to Rotary Market and rented the two small storefront areas under the addresses 954 and 962. S. Vine St. D.E. Parker operated a meat market in 1938. Isaac Krizhevsky ran a fruit stand in one of the areas from 1935-1936 before Japanese American proprietors took over the space. Many Japanese businesses operated throughout Hollywood along Cahuenga and Vine from the teens, especially those catering to groceries and markets. Sakai Kato operated the fruit market in 1937 and 1938, to be replaced by Y. Yoshida in 1941. After internment and World War II, no more Japanese Americans opened businesses in the structure.

During the 1950s, owners renovated the building looking to maintain a steady business. The small storefronts were altered into a laundrette and a paint store, and have seen continual adaptive reuse since that time, currently operating as a dentist’s office and hair salon.

Though slightly shopworn after 93 years of business, 960 Vine Street still remains viable as a market, with little alterations over time and an excellent example of 1920s Spanish and drive-in market design. While most chain businesses today construct a continual string of cookie-cutter, modular structures, this striking little market demonstrates the care and attention builders took in 1927 to make it a distinctive business attractive to customers.