Screenplay by Sydney Boehm from “Lions at the Kill” by Max Catto.

“Seven Thieves” is available from Amazon on DVD, Blu-ray and streaming.

In this graphic black-and-white CinemaScoope production of the preparation, execution and ironic aftermath of a $4,000,000 robbery from the Monte Carlo casino, Twentieth Century-Fox is offering audiences one of the most exciting and intriguing crime movies to come along in some time. Reminiscent of “The Asphalt Jungle” and peppered with some delightful whimsy, this one shapes up as a stick-out attraction for all markets. Edward G. Robinson, Rod Steiger, Joan Collins and Eli Wallach provide solid marquee appeal and word of mouth will be a strong asset. The class trade will appreciate its literate approach and the general audience will be kept glued to their seats by its throat-clutching suspense.

Bosley Crowther, writing in the New York Times (March 12, 1960), spent most of his review in a detailed account of the plot. He said:

A decidedly bold, ingenious and nerve-rackingly delicate plot for robbing the vaults of a gambling casino at a French Riviera resort is happily demonstrated in Twentieth Century-Fox’s “Seven Thieves,” a tight little package of melodrama that came to the Paramount yesterday.

… As entertainment it is altogether good — well conceived for suspense and excitement, well directed by Henry Hathaway and well played.

The big question for me was the similarities between “Seven Thieves” and the original Rat Pack “Ocean’s 11,” which opened a few months later. (You can have the remakes. All of them). “Seven Thieves” was based on Max Catto’s 1959 novel while the New York Times reported in 1957, well ahead of the Catto novel, that Frank Sinatra and Peter Lawford planned to produce “Ocean’s 11,” from a script by Jack Russell and George C. Johnson. At least one critic for Photoplay noticed  the similarities.

“Seven Thieves” holds up fairly well, and I’m pleased with the process of selecting movies based on their reviews in the trades. But I have some minor reservations. “Seven Thieves” was initially listed as being filmed in color, but ended up in black and white. As a wide-screen format, CinemaScope is very unkind to process shots. There aren’t many in “Seven Thieves,” but they are horribly fake. Another visual problem with the movie is that many shots consist of two or more actors sitting at a table or sitting a bar and conversing. Perhaps my sensibilities have been spoiled by more recent suspense films, but long stretches of this movie are extremely static.

Trivia notes: May Britt was originally cast but refused to make the film and was replaced by Joan Collins. And yes, this is the film where Candy Barr taught Collins how to be an exotic dancer.

Just a reminder: The request line is always open for mystery movies, as long as they are available. 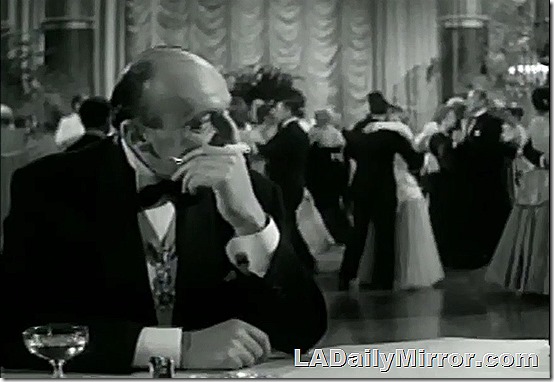 Here’s the full frame of Marcel Hillaire and Joan Collins. As I said, lots of static shots.

For Monday, we have a mystery gent who is boosting his mystery quotient by covering part of his face. His mystery companion, alas, does not approve of such goings-on and has been cropped out due to insufficient mysteriousness. You’ll just have to wait until Friday.

For Tuesday, we have a mystery gent. At this moment, he is not particularly happy about such goings-on.

Update: This is Berry Kroeger.

For “Hm Wednesday,” we have a mystery gent. He is intrigued by such goings-on.

Update: This is Michael Dante.

Update: This is Alexander Scourby lusting after Joan Collins.

For “Aha Thursday,” we first have a mysterious gentleman who may not be much of an “aha.” His problem is that he approves of such goings-on by our mysterious leading lady, who will appear tomorrow.

Our second mystery fellow is much more of an “aha.” And no, he does not approve of such goings-on.

Update: Eli Wallach does not want to take his meds.

For Friday, we have this less-than-mysterious woman.

She has a friend who is even less mysterious.

Update: Joan Collins and Rod Steiger. I did not see that one coming.

And he has a friend who may be the least mysterious of all.

Update: Rod Steiger and Edward G. Robinson. And yes, they are sitting.