Popular culture often comments on social and political issues of the day when citizens have no other way to voice opinions, change policy, or confront government. During the early years of the 20th century, sheet music provided a running commentary on contemporary topics and situations, serving as one of the first forms of social media.

The mass consumption of sheet music reached its heyday in the 1920s, just as major events such as voting rights for women, the Jazz Age, and Prohibition were inaugurated. Movies and sheet music provided a sharp and often humorous take on Prohibition, which after decades of protests by groups like the Woman’s Christian Temperance Union took effect to weed out the manufacture of spirits and alcohol, close bars and taverns which these groups believed contributed to prostitution, drug use, and crime. After Congress ratified the 18th Amendment in 1919, Prohibition began January 17, 1920.

Long before the creation or popularity of broadcast media, groups of family and friends gathered in their parlors to sing along to popular songs of the day, printed on colorful pieces of sheet music. Written quickly in response to breaking news and timely topical issues, sheet music graced virtually every home, theatre, or tavern in the country. Artists’ colorful illustrations sold the catchy tunes penned by composers and lyricists for the various music companies mostly based in Tin Pan Alley. This popular form of entertainment parodied the ineffectiveness of Prohibition and the easy ways to subvert it.

Veteran composers Billy Joyce and Rubey Cowan dashed off the ditty “Oh Doctor” as Prohibition took effect in 1920. Cowan worked as manager of the Chicago office of the Albert von Tilzer owned New York Music Co. in 1912 while getting his composing off the ground. For several years he moved between publishing houses while getting an occasional song of his own published, before gaining some measure of success working with both Lew Brown and Earl Carroll in 1918.

In January 1920, Cowan joined forces with Mack Stark to form Mack Stark and Rubey Cowan Music Publishers in New York City. Just like Cowan, Stark worked his way up managing publishing houses like Kalmar and Waterson, Berlin, and Snyder while trying to achieve writing success. Both achieved some fame with their songs, but never finding a massive hit.

Stark and Cowan announced their new partnership with a full page ad in the January 26, 1920, New York Clipper, noting their office would open February 3 thanks to the public’s help and that “our future success depends upon you.” The February 16 Variety reported that the duo “opened their new office on the ground floor of the Piantadosi Building for the profession…,” with Stark managing the business side and Cowan the writing and publishing. 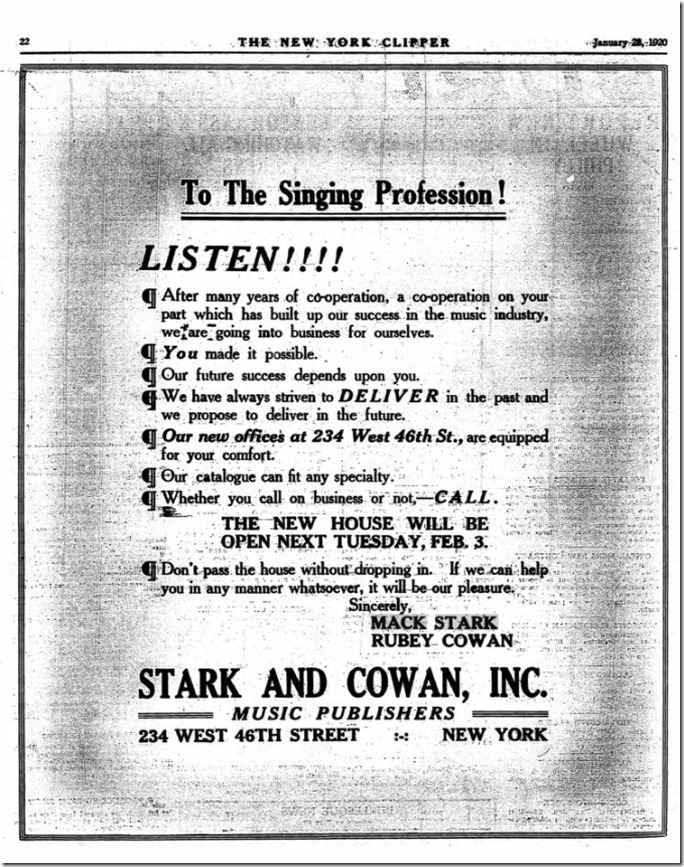 Red-haired Joyce reviewed vaudeville acts for Variety in the early 1900s before moving on to playing piano as part of various song duos in the late teens. In 1920 he joined Stark and Cowan in their publishing company as floor man, playing the new songs for salesmen and potential producers.

One of the first and most popular songs for the Stark-Cowan Company, “Oh Doctor” was one of the first Prohibition-related songs, hitting the streets in February. Comedy singing/dancing teams quickly employed it for their acts, with Kraus and La Salle concluding with it. The February 27 Variety noted that “the lyric tells of the efforts of some chap to worm out of the doctor a “pass” for drug store booze.”

The composing team hit paydirt with their anti-Prohibition song “Oh Doctor,” hitting upon the ultimate weakness of the Volstead Act. While it forbade the selling of alcohol by businesses, restaurants, and taverns, it allowed alcohol’s use for communion as well as allowing doctors to claim it as a therapeutic tool, writing prescriptions for its use.

As the opening verse of the song stated,

Most ev’rybody you meet now a days

Seems to be feeling so blue

They say it is an imposition to enforce this prohibition

And I think so too

And now in their office at most any hour

You’re bound to hear somebody cry…

While none of the publishers nor composer, Stark, Cowan, or Joyce, became famous, all continued working in the entertainment industry. Joyce continued as accompanist for performers, and Stark and Cowan ended up working as agents and managers for such individuals and businesses as Charles Feldman, NBC, and Paramount Studios. Cowan’s son Warren did achieve major success later as a publicist for stars and studios.

Prohibition continued for 12 years after its inauguration. While intended to end violent crime, prostitution, and addiction, it led to the creation of powerful gangs murdering an butchering each other over its sale and manufacture, leading to the eventual power of the Mafia. Addiction continued apace, moving on to prescription drugs and opiates. Prostitution blossomed as well. Eventually the United States grew weary of the Prohibition farce, repealing it with the 21st Amendment in 1933.