Screenplay by Robert Rossen based on the play by Mary McDougal Axelson.

“A Child Is Born” has never been commercially released on VHS or DVD, although gray market copies may be found on the Internet. Since the movie is not readily available, except for occasional airings on TCM, I’ll go into more detail than usual.

I thought it would be interesting to select mystery movies by going through the trades on the Lantern search engine and my first choice was “A Child Is Born,” based on reviews from January 1940. So far, the trades haven’t been especially reliable, and the result the first time out of the gate is not much better than picking movies at random. “A Child Is Born” was a major production for Warner Bros. and received a great deal of attention but it is a creaky old chestnut from the era when pregnancy was treated as a mysterious disease (and do NOT ask about “where babies come from,”) the doctors and nurses are all-knowing priests in perfectly starched white uniforms, and the fathers – oh dear, every cartoon cliche you could imagine (although, really, imagination does not seem to have been involved).

The movie is a perfect example of the absurdities of the Production Code in which allegedly expectant mothers show no signs of being pregnant (no baby bumps for the censor, please), the underage girl and her boyfriend are squeaky clean, and, of course, the leading lady, although she achieves cinema sainthood by giving birth, has to be killed off because she is a murderer.

At best, “A Child Is Born” betrays its roots as a play (“Life Begins,” with eight performances on Broadway in 1932, also a film); it is stagey and static, and the characters enter and exit by the playwright’s little ticking clock.

Handling a difficult and delicate theme in this remake of the “Life Begins” of several years ago, Lloyd Bacon, director, and an excellent cast have fashioned a moving piece of dramatic entertainment.

Concerning itself as it does with birth, set in the maternity ward of a large metropolitan hospital, and laden with the often heartbreaking developments of such a place, this obviously is not a picture for youngsters. However, that by no means implies that there is anything off-color in the production. On the contrary, the picture has been made with restraint, often with considerable dignity, and with a regard for the sensibilities of any adult audience.

There’s still a great deal to be said for maternity, which can be touching or comic, and for paternity, which can be comic or touching; and Mary McDougal Axelson’s play, “Life Begins,” manages to express most of the obvious things as eloquently now as it did in 1932, when it made its double salute to Broadway — as a play and as a film. The Warners are calling their new version (at the Criterion) “A Child Is Born,” which is commendable understatement, for seven really are born, including Florette’s unwanted twins, Mrs. Kempner’s stillborn son, the little daughter Grace Sutton sacrificed her own life to bear. These are the vital statistics and the life-stream of the film; unless you are vitally interested in babies, just babies, and the joy and heartbreak they may bring, the Criterion would be a chancey place to go.

Since maternity ward drama does not change with the years — there will always be fainting fathers, white-faced mothers-to-be, those who want children and those who do not — Mrs. Axelson’s drama remains pretty much the same clinical casebook it used to be, although Geraldine Fitzgerald and not Loretta Young is playing Grace Sutton, the convicted murderess who is to have a child, and Jeffrey Lynn, instead of Eric Linden, is the tragic husband who is asked to decide between the life of their unborn child and that of his wife. Miss Fitzgerald and Mr. Lynn have played it splendidly, and so have Gladys George, Gale Page, Gloria Holden, Fay Helm and the rest; but somehow we cannot believe any case really could upset so firmly braced an applecart. “A Child Is Born” is grounded in the eternal verities; no one can sell maternity short.

We’ve no doubt the Warners could — and probably will — produce another letter-perfect copy of the play ten years from now and be as confident of reducing the women of the audience to a state of emotional collapse and the men to an embarrassing degree of self-consciousness toward the little mothers in their households. One cannot protest these things, or argue that the attempt to harrow is too deliberate or too obvious. One cannot even say it is not entertainment, although it isn’t amusing, because too many persons cannot be reminded too often of the agonies through which the world’s little people have to go. It’s a film, in short, which we did not enjoy particularly, yet doffed our hat to as it went by. Maternal instinct, no doubt.

If you remember the play and picture, “Life Begins,” you will be familiar with the latest version of the story, but excellent characterizations by a fine cast and sympathetic direction make the film entirely new. Audiences generally should enjoy the picture as it paints a very human cross-section of life familiar to everybody. After all, maternity is still the most fascinating and absorbing event that will ever enter into the life of any man or woman, and there is no man or woman, woman particularly, who is not interested in the subject. The story has been handled delicately, but without losing any of its dramatic punch. Miss Fitzgerald is splendid in the role of the convicted murderess and fine supporting characterizations are contributed by Jeffrey Lynn as her husband, Gladys George, Spring Byington, Gale Page, Johnnie Davis, Henry O’Neill and John Litel. Lloyd Bacon gets the most from his players and maintains his drama.

In 1932 Warner Bros. First National produced a picture titled “Life Begins.” It was set in the maternity ward of a large hospital and dramatically presented the cases of various types of patients. Here we have substantially the same material under a new title. There is a demented woman, a deserted wife, one who has married against her parents’ wishes, one who is under sentence for murder. There are babies that are wanted, babies that are unwelcome, babies that live, and babies that die, but scarcely any of the mothers or babies are healthy, normal, happy human beings. The American Medical Assn. at the time protested the showing of “Life Begins” and “Motion Picture Reviews” carried the following comment which seems equally applicable to “A Child Is Born.”

The fault of the picture lies in the producer’s ignorance or willful disregard of hospital methods and obstetrical care, in the vicious disregard of truthful realism. To create “drama,” they needlessly sacrifice a young mother, callously give false impressions, implant unnecessary fear and suspicion in prospective mothers. In this day of enlightened medical procedure it is unfortunate that a producer should so unfairly place a handicap upon hospitalization and physicians. 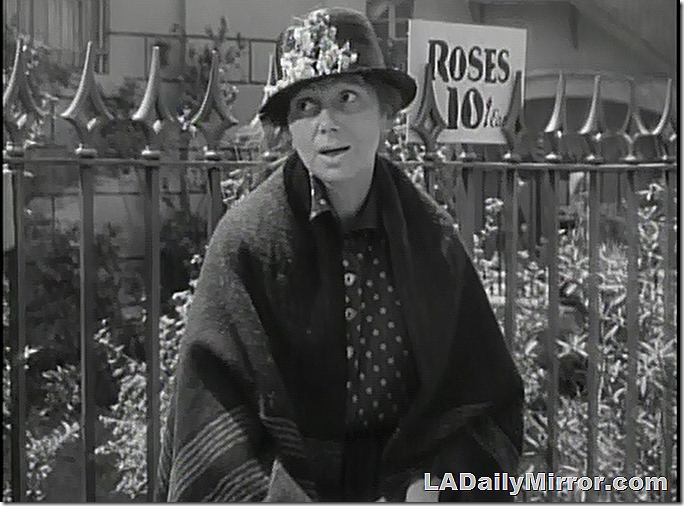 For Monday, we have a mystery woman. She neither approves nor disapproves of such goings-on.

Update: This is Sibyl Harris. 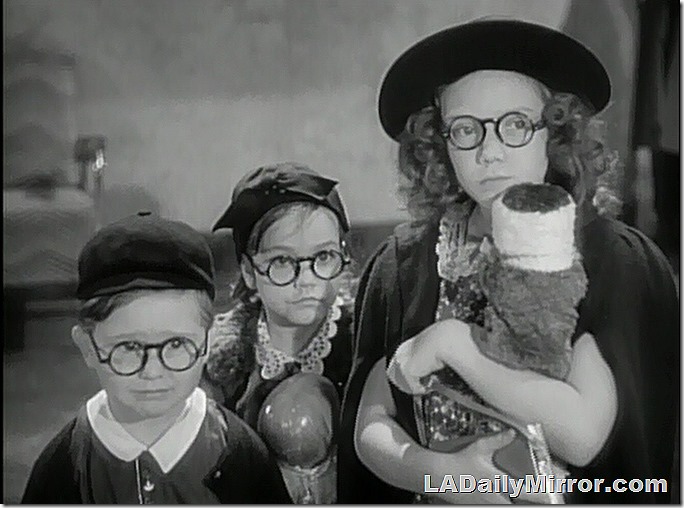 For Tuesday, we have some mysterious moppets in a sight gag that reflects some of the humor in our mystery movie.

Update: This is Buz Buckley and Joan Carroll, right.

Update: The punch line. All the kids look like Hobart Cavanaugh. Also Spring Byington. And yes, she is supposed to be pregnant. 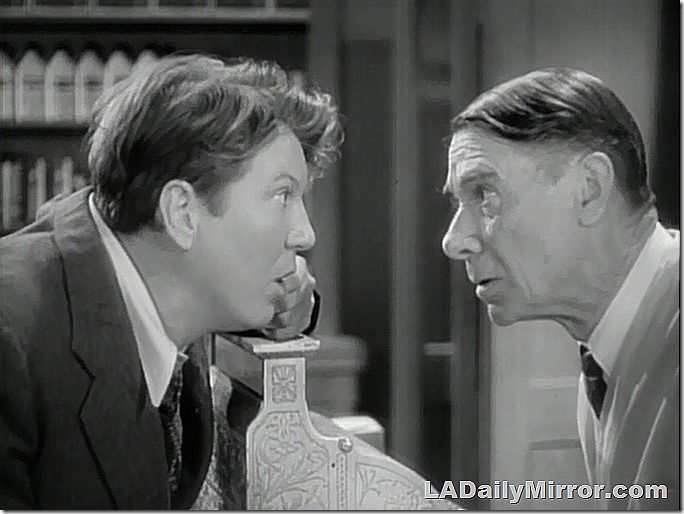 For Wednesday, we have two mystery gents.

Update: This is anxious father Johnnie Davis and Sidney Bracey. 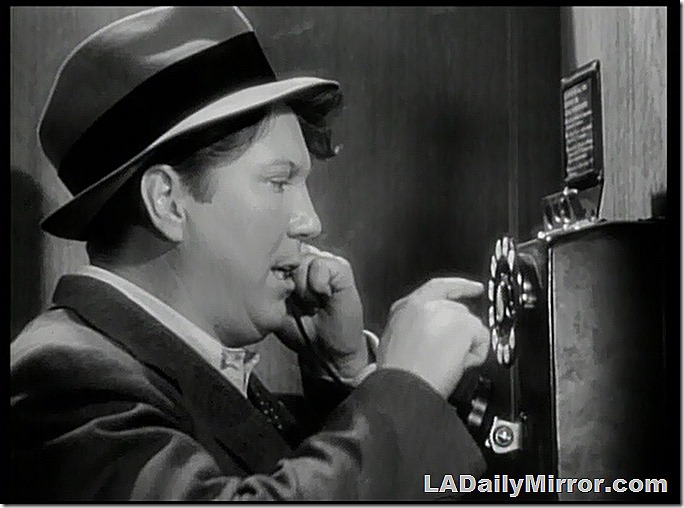 Here’s Wednesday’s mystery guest No. 1 on the phone.

For “Aha Thursday,” we have two mysterious women who may or may not be much of an “Aha.”

Update: This is Gale Page and Esther Dale.

Update: This is Eve Arden and Gale Page. 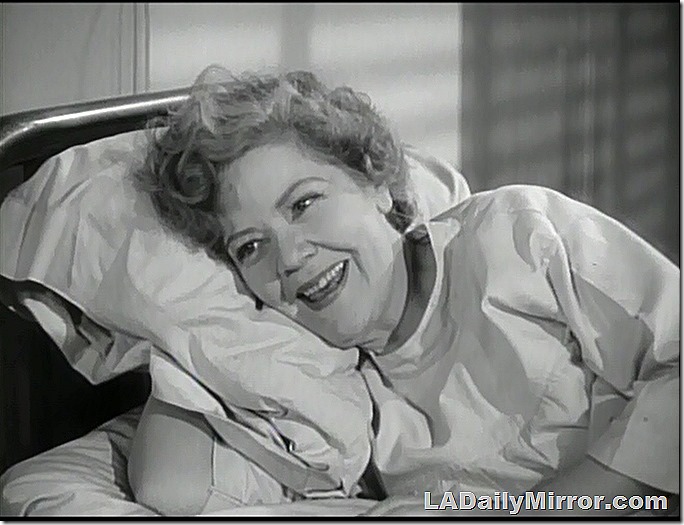 And here’s a mystery woman who’s even more of an “Aha.”

Update: This is Spring Byington, and yes, she’s supposed to be pregnant.

For Friday, we have this mystery woman….

Update: This is Nanette Fabray. 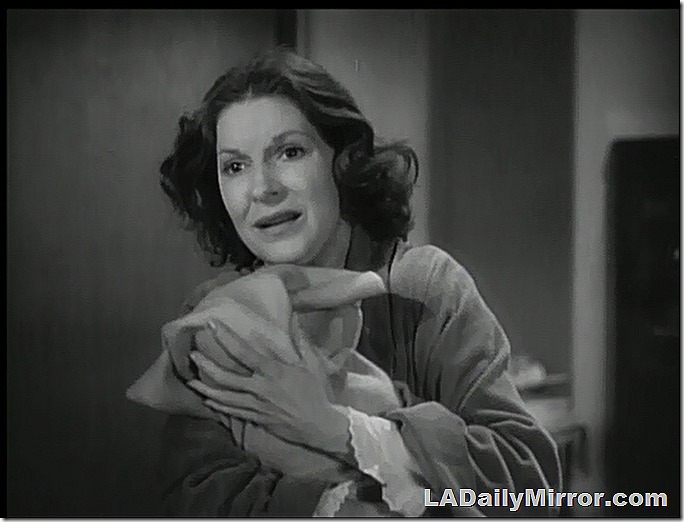 … and this rather intense mystery woman…

Update: This is Fay Helm as the distraught baby kidnapper. 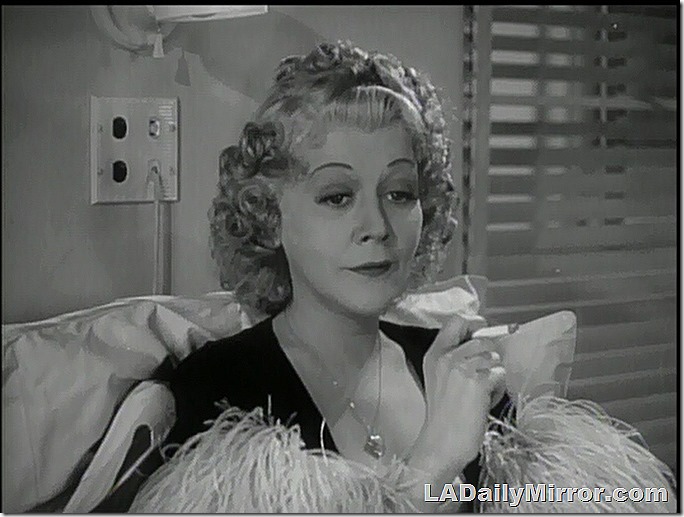 … and this mystery woman – who should NOT be smoking in bed …

Update: This is Gladys George.

… And finally, our mystery leading man and leading lady.

Update: This is Jeffrey Lynn and Geraldine Fitzgerald.