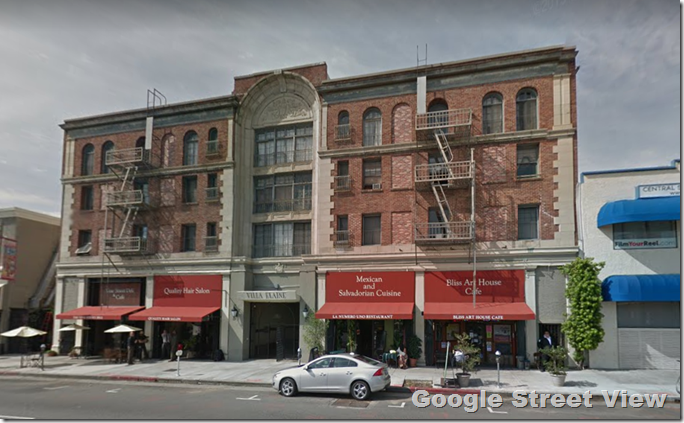 Still stylish after 94 years, Villa Elaine has reigned as one of Hollywood’s most popular apartment/hotels in its location on Vine Street just blocks from Sunset Boulevard. Courtly and regal, the building has attracted tenants whether known as the St. George Court or under its current name, Villa Elaine.

On January 4, 1925, the Los Angeles Times announced that Mrs. Edna Henderson had purchased 1241-1249 Vine Street to construct a five-story, Class C arcade store and apartment building in Spanish Revival style featuring four stores and sixteen studio shops beyond its 64 apartments. Some papers estimated the structure to cost $250,000, with architect Lewis (L.A.) Smith designing the building and the Arthur Bard Co. to serve as contractor.

The Villa Elaine in the Los Angeles Times, 1954.

Smith and Bard possessed a history, working together on the building of Pasadena’s Bard Theatre. Smith had designed other motion picture theatres throughout California in places like Santa Maria, Ventura, Palos Verdes, Redlands, and several around Los Angeles such as the Highland Theatre, Vista, and the El Portal. The Arthur Bard Co. supervised construction on everything from Casa Del Mar in Santa Monica to theatres to retail space to apartments like the St. George Court, suggesting a simple but elegant structure.

The August 16, 1925, Los Angeles Times reported that the building would employ 345,000 square feet of gypsum-centered plaster lath for interior plaster work.  Plans of the building even appeared in the August 1925 issue of Pacific Coast Architect, giving it respectability.

The St. George Court received its certificate of occupancy from the city of Los Angeles on October 7,1925, listing 229 rooms in 97 units. Though close to streetcar lines, the building had access to parking in an adjacent building. Upon its opening, owners positioned it as suitable housing for entertainment and business professionals, with film executives like Charles Burr and stage/screen star Marjorie Rambeau listed as residents.

A variety of stores occupied the commercial space, including barber, clothes cleaner, and cigar store, which all remained for years. Over time, retail businesses moved in and out, and included such tenants as cafes, upholsterers, tailors, express companies, and even later a bar.

Like with many other commercial enterprises, the St. George Court lost business with the advent of the Depression. By 1930, ads ran regularly in the Times, noting singles cost $45 and up, with steam heat, garden, and adjacent garage.

An ad in the June 25, 1930, Times now called the St. George Court “an apartment hotel,” with 24-hour service, steam heat, refrigerators, garden, and adjacent garage. Apartments ranged from $40 bachelors to $45 singles, and even one and two balcony bedrooms from $75 to $125.

By 1932, the building became part of a fraud case, with new owner A.J. Showalter and six others on trial for using he mails to obtain money fraudulently from clients for multiple apartment buildings throughout Hollywood and Los Angeles and taking receivership through the American Mortgage Company. On the stand, Showalter claimed that when he took over the St. George it was “in lamentable condition…some of the apartments being entirely bare of furniture, others having stoves missing and linen gone, the paint peeling off the walls throughout the house and the entire lower floor being over-ridden with termites.”

Showalter claimed that within a month, his hard work established it as a first-class residence, earning supposedly $3,600 a month. After more than a year of legal issues and 94 days of trial testimony, Showalter began serving two years at McNeil Island.

The St. George Court, also known as the St. George Apartments, passed to Foundation Realty before G.E. Kinsey purchased the building in late October 1938 for $250,000, with the October 29 Los Angeles Times now claiming it possessed 105 apartments. It would sell a few times over the next few years, and by 1949, newspaper ads revealed the building as one of many in the real estate portfolio of the Pepperdine Foundation.

With name changes came upgrades and remodels as owners fought to stay up-to-date and current to possible tenants. Owners pulled a permit in 1952 to add a swimming pool, which possibly was not constructed, as another permit was pulled February 19, 1964, to build a pool. Permits also reveal multiple repairs over the years for fire damage to units, as well as repairs after earthquakes in 1971, 1978, and 1994.

In 2007, the Villa Elaine was named Los Angeles’ Historic Cultural Monument  No. 675.