“Green Fire” is available on DVD from Warner Archive.

Mary Mallory also has a book on Grace Kelly, “Living With Grace.”

“Green Fire” was made during a busy year for Grace Kelly. She told the New York Times: “I finished ‘Green Fire’ one morning at 11, went into the dubbing room at 1 and at 6 I left for France to make ‘To Catch a Thief.’ And I had only 10 days of rest between ‘The Bridges of Toko-Ri’ and ‘Country Girl.’ ”

Viewing the film in 2019, it seems like an old chestnut with a “by the numbers” script from the 1950s, when the studios were trying in vain to compete with television by producing wide-screen epics filmed in exotic locations. The cast and crew faced a number of challenges in filming in Colombia, according to news accounts of the time.

Of course some scenes involved movie trickery, like this establishing shot. 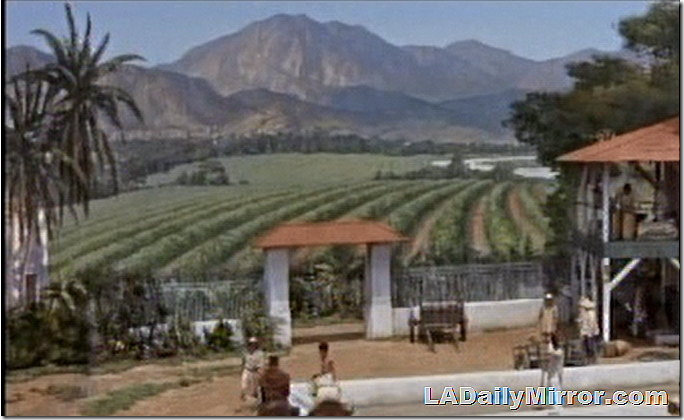 And then there is the ghastly theme song, “Green Fire,” because in the 1950s, every movie, especially after “High Noon,” had to try for a hit theme song. “Green Fire” is almost as inane as the theme song to “Home Before Dark,” which is saying something.

That routine “by the numbers” script by Ivan Goff and Ben Roberts? Why, yes, they wrote “White Heat.” They were also responsible for the clever TV series “The Rogues” (at least I remember it being clever), before unleashing “Charlie’s Angeles” on the world. They later reunited to write the notorious 1981 disaster “The Legend of the Lone Ranger.” Roberts died in 1984; Goff died in 1999.

In “Green Fire,” which Metro-Goldwyn-Mayer delivered to the Mayfair yesterday to add an appropriate spot of color to the holiday cinema fare, the boys have got themselves a lurid and generally engrossing adventure film, all about emerald mining in Colombia – and also about a fellow and a girl. In CinemaScope and Eastman Color, it looks particularly good.

The fellow, played by Stewart Granger, is a tough mining engineer who is bent upon snatching those beautiful emeralds from the heart of a mountain and will let nothing interfere. And the girl, played by lovely Grace Kelly, is the owner of a coffee plantation not too far away. She is bent upon staying in the coffee business, and likewise means to let nothing interfere.

For Monday, we have a mystery woman. She approves of such goings-on.

Update: This is Charlita. There are better shots of her in the movie, but they all show up on a Google image search. She’s also in “Bela Lugosi Meets a Brooklyn Gorilla,” which is not in the Daily Mirror vault – as yet, anyway.

For Tuesday, we have a mystery gent. He does not approve of such goings-on.

Update: This is Nacho Galindo

For Wednesday, we have this mystery guest….

Update: This is Rico Alaniz.

… also this mysterious padre. The leading lady has been cropped out due to her insufficient mysteriousness. She will appear Friday.

Update: This is Robert Tafur.

For Thursday, we have a mystery gent in a fedora…. and Back of the Head Guy.

Update: This is Stewart Granger (BOTHG) and Paul Douglas.

We also have this mystery gent. The leading lady has been cropped out due to her lack of mysteriousness. She will appear Friday.

Update: This is John Ericson.

And for Friday, our leading lady and leading man.

Update: Our leads, Grace Kelly and Stewart Granger. There are better shots of them in the film, but they all show up in a Google image search.