Long a favorite activity of high society, tennis has been a way to fashionably exercise and enjoy time with friends for centuries. Los Angeles “in crowd” flocked to tennis, especially in the 1920s when it began to rise in popularity around the world. Seeking to become a world class home for the game, the Los Angeles Tennis Club constructed an elegant Spanish Revival building and courts at its current 5851 Clinton Street location in 1920. Designed by preeminent Southern California architect Sumner Hunt, the refined location has hosted top athletes and motion picture stars for over 97 years.

The “popular” club itself seems to have begun in 1889, per listings in the Los Angeles Times and Herald, with its first courts opening Friday, September 20, 1889 at Ninth and Pearl Streets, per the September 22, 1889 Los Angeles Times. It hosted men’s singles and doubles, women’s singles, and even mixed doubles in its first tournament. While small, the club hosted teas, tournaments, and events through 1897, when all mention of it in the newspaper disappears until showing up again in 1919, when the Red Bluff Daily News reported that the newly formed club intended to build a $25,000 clubhouse with 20 courts, after talking about it for years. 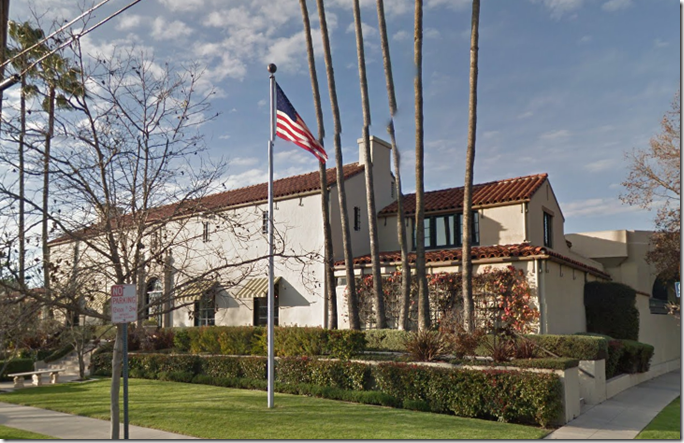 Officially incorporating October 28, 1920, the club began searching for a suitable location between Los Angeles and Hollywood, looking for a central spot near the two on which to construct an exclusive facility. Officials finally accepted member G. Allan Hancock’s generous proposition on five acres of land he owned near Melrose Avenue and Cole Streets and adjoining the newly constructed Wilshire Country Club. The Los Angeles Times described the property as near the West Sixth Street streetcar line and easy walking distance to the Santa Monica Boulevard line. Memberships would pay for construction and upkeep, with hopes to eventually build grass, clay, and hard courts for competition purposes. Sumner Hunt and his partner Silas Rease Burns were hired to design a graceful clubhouse suitable for the exclusive membership.

The club broke ground December 1, 1920, for construction of the first courts, with grounds later to include patios and pool for relaxation and entertainment purposes by members. The clubhouse would contain dining rooms, meeting rooms, locker rooms, an apartment for the manager, and balconies from which to view competition.

President Thomas C. Bundy announced via the Los Angeles Times on February 13, 1921, that the club had officially closed a ten year lease on Hancock’s five acres, “with an option to purchase the property outright at any time during the life of the lease at the rate of $2,000 an acre. The club would pay Hancock $25 a month in rental until purchase. At that time, they intended the two story Spanish building to face Melrose Avenue and contain both men and women’s wings, with a center show court surrounded by grandstands and balcony on the clubhouse. The eight concrete courts currently under construction would be four inches thick.

The club rushed to finish building courts in order to host the premiere Pacific Coast tournament July 2-4, 1921, hosting their grand opening June 18 with a grand exhibition. It soon hosted the Southern California championships as well as major Davis Cup players from Japan and Australia. America’s champion “Big Bill” Tilden also participated in exhibitions and tournaments at the club. While the organization had been able to complete six courts, they were still gathering enough members to cover costs for constructing their clubhouse. They did raise enough funds to open pool facilities June 16, 1923 with an entertaining exhibition by Olympic swimming and diving champions Eleanor Holcomb and Dorothy Poynton.

Andre Leeds and Frank Shields at the tennis club, Photoplay, 1936.

By 1923 the club had earned enough money to finance construction of their playhouse, moved now to Clinton Street and Cahuenga Avenue. The November 8, 1923 San Bernardino Sun reported that the $100,000 “magnificent” clubhouse would finally be dedicated on November 17, following several months of construction by the Schofield Engineering Company. Grand opening ceremonies on December 1 would salute the luxurious property, with an open house, exhibition, tea, and then lavish celebratory dinner and dance, smartly paid for by selling off frontage on Melrose Avenue just a few days before to pay off entire cost of acreage, courts, clubhouse, and furnishings, estimated to have cost $75,000 themselves. In 1925, Hunt’s design for the main building won the local American Institute of Architects’ Award for outstanding building, per Southwest Builder and Contractor.

The “premiere club of the Pacific” soon became the main Los Angeles location for large Southern California and western tennis championships, hosting such leading stars as Tilden, Helen Wills, and Molla Mallory, after constructing the largest slab of unjointed concrete on May 8, 1924 just north of the new clubhouse. Grandstands and balcony would allow 2,500 persons to view matches. Over the next several decades the club would continually update courts, locker rooms, grandstands, and balconies to continue its reign as one of the United States’ most outstanding tennis facilities. In fact, the June 1, 1924 Times reported that new courts had recently been constructed by Clark Cement and Construction company combining 70 pounds of Irish potatoes with concrete to ensure a smooth, hard surface and velvet finish.

While the upper crust enjoyed working out, attending tournaments, dining, and hanging out at the luxurious location, diverse “guests” visited the property as well. The March 21, 1940, Times reported that three young women had been arrested by a police raid at the club for performing strip teases, with one finishing an encore before feeling embarrassed to be arrested in her naked state by police. They were found guilty by a Los Angeles court in April.

The club survived a fire October 23, 1967, when a fire started from a smoldering cigarette on a couch burned the women’s locker room and was discovered by police at 3:43 am.

Over the years, some entertainment members moved their memberships to other clubs like the Hillcrest Country Club, Bel Air Country Club, and other luxurious facilities on the west side, and the institution finally abolished the entertainment tennis tourney. Upper class and entertainment industry stalwarts dominate member roles today, reveling in the understated, relaxed elegance of the sleek clubhouse and facilities, a gem from the early days of Hollywood.