Merl Reagle in 1974 for the Invisible Theatre production of “Mad Dog.” I kept asking him why he didn’t write parts for himself and he said if he had wanted to, he would have done it. Original photo by Tim Fuller.

Like his friends and his many fans in the world of puzzles, I was stunned Saturday to learn of the death of Merl Reagle, whom I met my senior year at Catalina High School in Tucson (Class of 1968).

I had the good fortune to sit next to Merl in a required class for seniors with the compelling name American Problems. Mostly what I remember from that class is having Merl show me how to construct crossword puzzles (at that point, he had already sold his first puzzle to the New York Times). It was an early lesson from the master, in which he talked about wide-open designs and other elements that aren’t necessarily apparent to the solver but are crucial to the constructor. 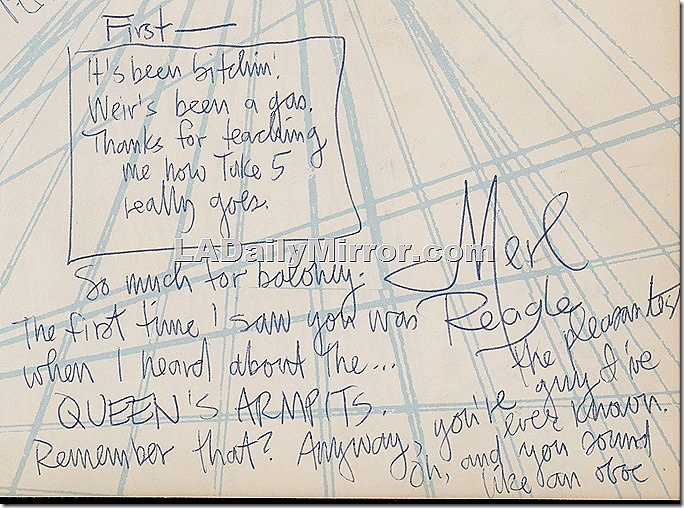 Merl Reagle’s inscription in my 1968 yearbook. I have no recollection of “The Queen’s Armpits.” Thank God. Mr. Weir was our teacher in American Problems. He later went into Dare to be Great, if you remember what that was. “Oh and you sound like an oboe.” Thanks, Merl.

Merl and I shared an interest in music, although our tastes varied considerably. I was in band (and occasionally in orchestra) and Merl was self-taught and didn’t read music and very much in love with the Doors. Merl was also involved in a band called Greylock Mansion, with two other friends, Larry Lorenzen and Bill Ball.

Merl rocks in “Catafalque” by Greylock Mansion. Yes, that is Merl on the organ – and singing.

We reconnected at the University of Arizona, where Merl was on the staff of the Daily Wildcat as a copy editor. What I remember from my first visit to the Wildcat (then on the second floor of the Student Union), was the wire ticker and Merl writing headlines on half-sheets of paper.

My visits eventually resulted in a job as music critic at the Wildcat under Arts Editor Scott Carter, but as I recall by this time Merl had moved on and my career as a music critic is a story that will have to wait for another day.

Merl began working at one of the Tucson daily papers when they were in the old firetrap building at 208 N. Stone. I first thought it was the Tucson Citizen (RIP), the afternoon paper, but on second thought, it might have been the Arizona Daily Star, where I was a music critic and later went to the copy desk, long after Merl left Tucson. I dimly remember Leo Della Betta, by then the Star’s ombudsman, bitching about how Merl used to wear old clothes to work.

Merl loved word games from an early age. A typical Merl gag from this period was “The notable doctor was not able to operate because there was no table.”

The only other Merl anagram I remember from this era is very off-color and X-rated, so I won’t publish it.   Email me if you are curious. 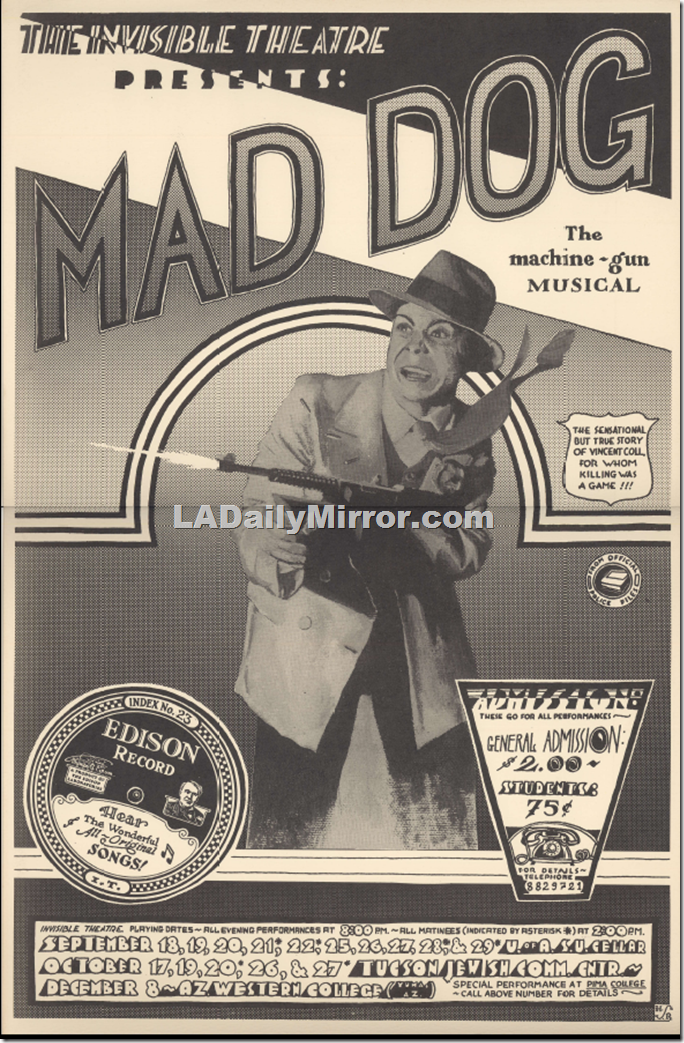 I’m not sure exactly how Merl got involved in the Invisible Theatre. I suspect it was because he was friends with Scott Carter, who had moved into the Invisible Theatre and taken a larger role when the founder, Dennis Hackin, went off to Hollywood and eventually wrote “Wanda Nevada” and “Bronco Billy.”  (The Invisible Theatre, as I recall, took its name from an early Hackin production, possibly named “Loud, the Deaf Guy,” that was more or less a shadow play in which the characters were never seen – this was before my time, but that’s my recollection of it).

I next reconnected with Merl when he was living in a big, old house south of downtown Tucson, possibly on South Sixth. At that point, his passions were music, the Invisible Theatre and cartoons – and boy, was Merl passionate about cartoons.

I was surprised this morning by the waves of emotion that swept over me as I opened up my archives on the IT from those days: Even then I was a pack rat and I swiped souvenir posters, kept programs and other ephemera.

In case you don’t know, the IT of those days was nothing like it is today. It was an incredibly ambitious company that only performed original plays, and on a regular schedule. We began in the fall with the first production and the rest of the season hadn’t even been written. And it seemed perfectly natural and no big deal.

We had a tremendous amount of talent and put on some amazing shows. Eventually, of course, all that talent and all those egos broke apart from centrifugal force. The 1974-75 season was extremely ambitious and the 1975-76 season was even moreso. The company had traditionally performed at the UA Cellar, but for the season opener, which was known within IT as “The Alcoholism Play,” the company mounted the production – eventually titled “Skokomo” — in the Tucson Community Center. The play didn’t go well and I tend to consider that the beginning of IT’s decline. (I was one of those people who had spun off to other projects and was no longer involved in the IT).

As I recall, Merl wrote music for all of these shows except for “State of Affairs,” which was composed by another friend, Kenneth LaFave. Merl also composed music for a play staged at the University of Arizona titled “Stained Glass,” about F. Scott Fitzgerald. I believe it starred John Brownlee, but I’m not sure.

Merl occasionally appeared in some productions as “Special Ed.” I don’t remember exactly what the shtick was now, but it involved thinking very quickly to either anagram or unscramble words. Merl was, as you can imagine, very funny and entertaining.

In addition to all of this, Merl also constructed a crossword puzzle for several of the programs. Merl often used the name “Puzzo” (as in puzz-oh) but in the era of novelist Mario Puzo (pew-zo), it was frequently mispronounced. Merl said nobody ever got that it was Puzzo and so he gave up.

Here’s a vintage Merl puzzle from a Western show titled “Oats,” from about 1973. (And no, there is nothing odd about saving a 40+ year-old theater program. It may be the only one in existence.)

”Dem Stagecoach Blooze” was by Merl.

Note the pun on Puzzo: Puzzoats.

And Merl did a much more ambitious puzzle for the program of “Mad Dog,” which opened the 1974 season. In case you are wondering about “Fall, 1932,” the program was printed like a 1932 edition of a New York tabloid.

A Puzzo in every chicken. Yet another Merl gag. Animal near extinction due to the destructive capabilities of jokebooks.

Merl eventually left Tucson for San Francisco and I didn’t hear from him for years. My understanding was that he was working in a movie theater and his letters consisted primarily of detailed plot analysis of cartoons.

Many years later, we reconnected in Los Angeles, where Merl was living and constructing Sunday puzzles for other papers, but not The Times, which bought hideously bad puzzles from  Barry Tunick and Sylvia Bursztyn. (Sample, Aug. 24, 1980: Chocolate substitute; Moved like the Afton; Loch of song; Byrnes of 77 Sunset Strip – I mean, seriously. This is a Sunday puzzle in a major U.S. newspaper?)

I attempted more than once to get The Times interested in Merl’s puzzles, but Barry and Sylvia were an institution, regardless of how lousy their puzzles were. When Barry died in 2007, Sylvia continued, using Barry’s stockpile of clues. When she died in 2011, The Times finally began running Merl’s puzzles. 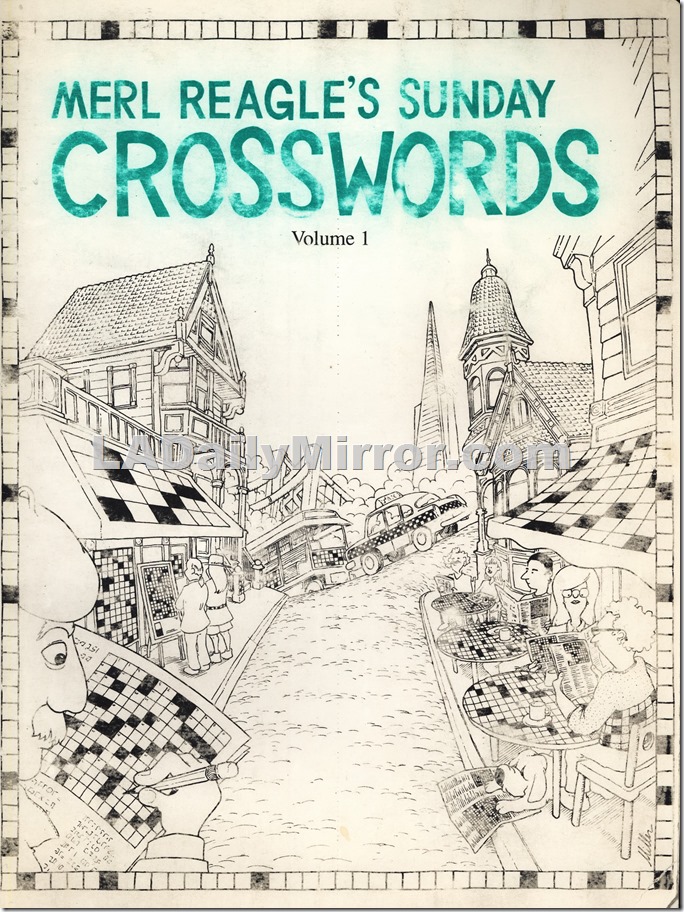 L.A. being L.A., Merl and I would get together and promise to see other soon, but we never did. We spoke by phone every couple of years – and it was always at least an hour conversation, with me having to switch to the other ear because my ears would get sore (oh you kids with your earbuds – you have no idea).

At this point as a constructor, Merl talked about the changing landscape in crossword puzzles – more use of trademarked names that were once taboo. He also talked about the challenges of constructing puzzles that could be published in the Bible belt (as he called it). Merl was not an elitist, but he was an expert on puzzles. He despised word searches, for example, and dumb puzzles with a photo of the subject in the center of the grid.

At the 1998 class reunion, Merl, Larry and Bill were reunited as Greylock Mansion, in what might have been the last time they performed.

The last time I saw Merl and his wife, Marie Haley, was for lunch at the Original Pantry in Los Angeles several years ago. It may have been when he was out to do “The Simpsons” or another occasion. At that time, Merl was wearing a crazy crossword puzzle tie. One of the last conversations we had was about “Wordplay,” the 2006 documentary that everybody reading this far has seen several times. Merl said no one expected one of the solvers (forgive me, the name is forgotten) to have a total meltdown, which added to the drama.

One thing we talked about at one time was the position of puzzle editor at the New York Times. Merl said he had been interested in the job, but was very pleased that Will Shortz got it because Merl felt he would have had less freedom as constructor. We reminisced about the Invisible Theatre and speculated about whether anyone had taped any of the shows.

Merl was not just a puzzle constructor. He was a puzzle historian. Merl knew the evolution of crosswords and the changing tastes. He was a hell of a lot of fun and even though we hadn’t spoken in a long time, I’m sad that I will never hear that thick New Jersey accent again.

Thanks for everything, Merl. You opened many doors for me intellectually and professionally. You are gone too soon.

I am retired from the Los Angeles Times
View all posts by lmharnisch →
This entry was posted in 2015, Obituaries and tagged #crossword puzzles, 2015, Merl Reagle, obituaries. Bookmark the permalink.