A souvenir postcard for the Pig’n Whistle, courtesy of Mary Mallory.

In 1906, founder John. F. Gage, proprietor of the Hotel America on Market Street, escaped San Francisco with his family after the Great Earthquake and fire, which burned down his inn, per author Veronica Gelakoska in her book, “Pig’n Whistle.” Coming to Los Angeles, the entrepreneur opened a high class candy shop and soda fountain at 224 S. Broadway, next door to City Hall, offering afternoon tea, French pastries, and light lunches as well as excellent candy.

Gage’s classy confectionery featured artistic design and excellent food, drawing both those looking for stylish surroundings and reasonable prices. His stylish eatery offered excellent service and entertaining atmosphere, thanks to toe-tapping tunes by piano or organ players. The restaurant produced its own candy, pastries, and bread in-house, later building its own factory to help churn out its popular products. Gage added a few stores downtown Los Angeles near theaters, catering to those looking for a quick bite to eat before or after the show.

From the beginning, Gage branded his chain of shops with a logo of a cute, dancing pig, which was carved on the sides of booths, featured on medallions, and painted on the stores’ own china. Images of the happy pigs were plastered on matchbooks, postcards, and souvenir menus as a marketing tool for adults, and items such as paper masks, coloring books and a story book explaining where the pigs came from appealed to tiny tykes. Porcelain pig figures created by the German company, Schafer and Vine decorated the stores as well. 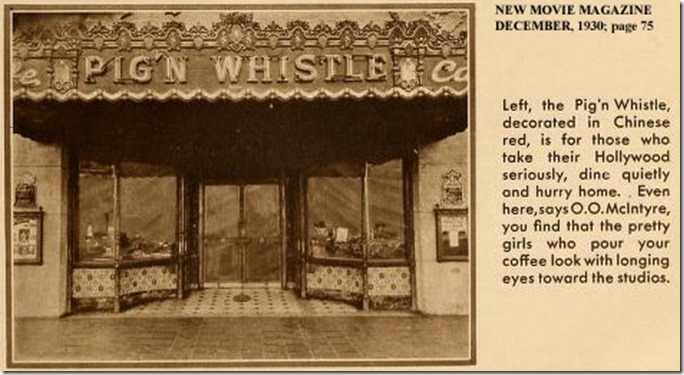 The company began expanding under the management of Sidney Hoedemaker in the 1920s, selling candy at various dry goods stores and opening branches in other West Coast cities like San Francisco, Oakland, Portland, and Seattle. In 1926, the Pig ’n’ Whistle Corporation purchased Neve’s Melody Lane restaurant at 744 S. Hill for $600,000, per the August 29, 1926 Los Angeles Times, in the process of expanding the chain. The article went on to mention that the company was installing two new Los Angeles stores: one at 807-809 W. 7th Street and one at 6714-6716 Hollywood Blvd., along with three in San Francisco and one in Seattle.

The Hollywood branch opened its doors with three elaborate shindigs from July 21-23, announcing it intended to entrance consumers and dominate the dessert market. On July 21, 1927, the Los Angeles Restaurant Association threw a dinner dance in honor of Hoedemaker, its president, in the recently completed establishment, featuring live music produced by Lou Erickson and restauranteur Eddie Brandstatter. The next day from 10 am to 10 pm, the Pig ’n’ Whistle opened for a public inspection, with an orchestra providing live music and candy ladies serving confections. The soda shop opened for business Saturday, July 23 at 10 am.

The July 22 L.A. Times reviewed the relaxed, unusual atmosphere and floor plan of the confectionery, noting, “The beauty of this establishment is an artistic achievement; the treatment general Moorish and Spanish in feeling, walls of Travertine effect and wrought iron fixtures. Great comfortable booths of old Spanish design upholstered in red Moroccan leather offer an entrancing lure. There is a main dining room salon, the mezzanine, and the private dining room.” In the private room, crystal chandeliers dripped style, a large plate glass window at the end of the room provided light from the street, and a series of artistic paintings of Don Juan decorated the walls. Patrons could enter via Hollywood Boulevard or from the Egyptian Theatre courtyard.

Patrons quickly flocked to the charming establishment, drawn for its stylish decoration as well as its tasty food, like scrumptious hot chocolate and delectable delights. Many bought candies as a pre or post-movie stack, purchased their gift boxes for special treats, and acquired their famous chocolate eggs at Easter. The store became very popular, thanks to its location on the Boulevard and adjacent to the Egyptian Theatre.

Hollywood organizations reserved the private dining rooms for all types of gatherings: the Rotary Club, the Shriners, Hollywood B’Nai B’Rith Association, the Hollywood Chamber of Commerce, the Hollywood Blvd. Association, Netherlands American Society of Southern California, and women’s clubs all held meetings here. Families and picture people arranged private parties, or dropped in for quick bites after shopping or attending the Egyptian.

The Pig’n Whistle chain continued expanding, opening a branch in the Hollywood Plaza Hotel on well-trafficked Vine Street, the lobby of the Roosevelt Hotel as well as other cities on the Pacific Coast, even during the middle of the Depression. They announced in their 1931 financial report that 65 percent of sales came from the restaurant, with the remaining 35 percent coming from candy, pastry, and fountain sales. The Vine Street location became the more popular branch in the 1930s, thanks to its location in the hotel and near the Brown Derby, Taft, and Equitable Buildings. The 1929 Times reported that that afternoon tea was popular, along with “dainty pastries, fine candies, and ices.”

Though the company closed a few branches, it remained profitable into the 1940s, recording its highest sales and net profits in 1942, even with food shortages. In 1923, the Pig ’n’ Whistle Corporation reorganized in order to help increase the stock dividend. They were bought out in 1945 and then reorganized again in 1946, sinking due to increased competition from newer restaurants and a slow decline in movie attendance at the Egyptian next door. as other forms of entertainment came along.

Declining business led to the Pig’n Whistle’s closure at 6714 Hollywood Blvd. in 1953, with many of the fixtures and furnishings acquired for the new Italian restaurant, Miceli’s. Over the next several decades, the building functioned as everything from Masters Mart to Cheap Feet shoe store to Numero Uno pizza. In 2001 after $1 million refurbishment, the business reopened, operating as the nightclub Nubar at night with beds as booths in the back.

Though missing parts of its beautiful Malibu tile and elaborate Spanish design, the Pig ’n’ Whistle still displays elegant, old world charm as it serves meals to Egyptian Theatre patrons and Hollywood tourists. Most of this block of Hollywood Blvd. still displays the gorgeous architecture and pedestrian friendly look that appealed to 1920s Hollywoodites, when Hollywood reigned as the film and entertainment hotspot of the world, reflecting the glamorous world of the movies in its lovely look and design.