Feb. 11, 1944: A P-38 rushes from Los Angeles to Santa Barbara and back in an hour to get penicillin for a Jimmy Doyle, 15 months old, who has peritonitis.

“Precious little of the stuff is available and that is controlled by Dr. Chester Keefer of Boston, custodian of civilian supplies of the drug,” The Times says.

The P-38 was flown by test pilot Lt. Col. Clarence A. Shoop, who turned the plane over to the Army when he was finished after picking it up from Lockheed, where Jimmy’s father is an employee.

Actor Charlie Chaplin is indicted under the Mann Act and is also accused of criminal conspiracy along with six others.

According to charges, on Oct. 5, 1942, Chaplin “feloniously transported and caused to be transported Joan Berry from Los Angeles to the city of New York” … “with the intent and purpose of engaging in illicit sex relationship with him and live with him as his mistress.”

A second charge accused of him of bringing her back to Los Angeles for the same purpose.

Observing the fighting between U.S. and Nazi troops in Cassino, Tom Treanor writes: “We see houses disappear in smoke and dust, fragments spinning slowly into the air. Then when the smoke clears, the house looks almost as it did before except for another hole in one corner, usually high up.

“Jerries in the basements are almost impossible to reach with shells, apparently even with delayed-action shells. These houses almost never collapse. Shells usually knock out a clean piece of masonry, leaving the rest intact.”

Opening today: “The Iron Major” with “Escape to Danger” (Ann Dvorak alert!) at the Fox Ritz, Los Angeles Theatre and the Egyptian. 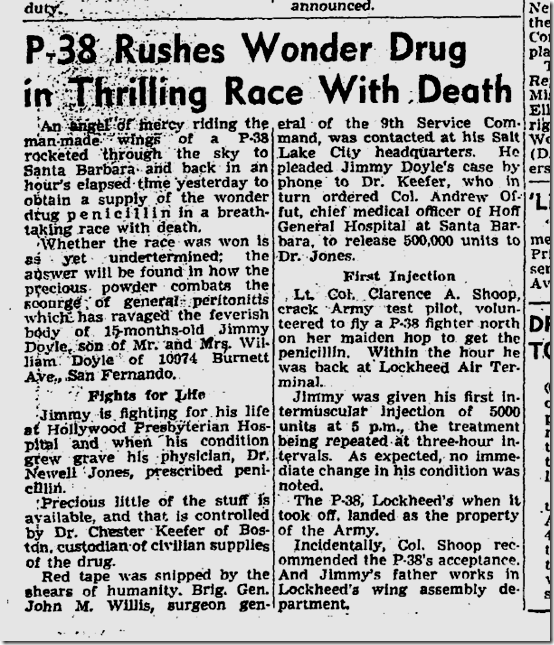