The Death of Ted Healy — Part 4 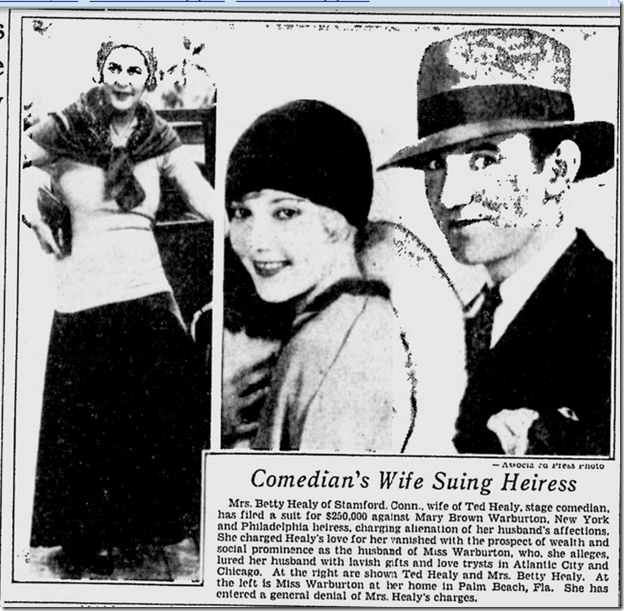 The most interesting person in the whole Ted Healy drama is his first wife, Betty Braun, his former vaudeville partner. Everyone else in the story — his manager, Jack Marcus; his sister, Marcia; the police; the coroner; even Dist. Atty. Buron Fitts —  accepts the coroner’s findings that Healy died of natural causes. It is only his first wife who makes the public allegations of a cover-up, that people are being protected and that she is threatened with being blacklisted for not keeping quiet.

Healy’s widow and sister dismissed her as a publicity-seeker, trying to capitalize on his death.

Let’s see what we can find out.

Here’s more on her lawsuit against Mary Brown Warburton. (Wfie? Nice job, there). 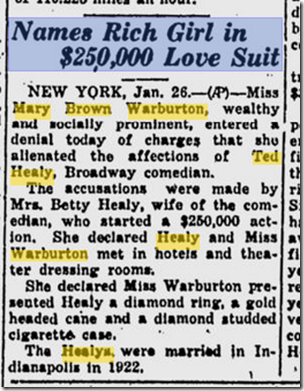 Jan. 26, 1932: We learn, in an Associated Press Story via the Prescott Evening Courier that they were married in Indianapolis in 1922.

A New York Times review (behind a paywall) of “Earl Carroll Vanities” from July 7, 1925, captured Ted and Betty Healy at their debut on Broadway. The anonymous critic couldn’t tell the difference between Ted Healy and Jack Norton.

From the July 12, 1925, edition of the New York Times (behind a paywall) we learn that Healy, who was born in Texas, was originally a cartoonist for the Houston Chronicle, “which brought him in touch with vaudeville players” and so he began writing skits. (That explains his ability to sketch Wallace Beery).

His first was “An Operation of Laughs,” and apparently a local theater manager suggested that he trying acting in it.

The New York Times says Healy started as a blackface actor in “Operation of Laughs” and that “it was not until his marriage to Betty Braun (Betty Healy) that he discarded the minstrel makeup.”
To be continued.

I am retired from the Los Angeles Times
View all posts by lmharnisch →
This entry was posted in 1927, 1932, 1937, Film, Hollywood, Nightclubs, Stage and tagged #Wikipedia, 1937, Betty Healy, Ted Healy, Three Stooges. Bookmark the permalink.

7 Responses to The Death of Ted Healy — Part 4