A Note on Music for Silent Films 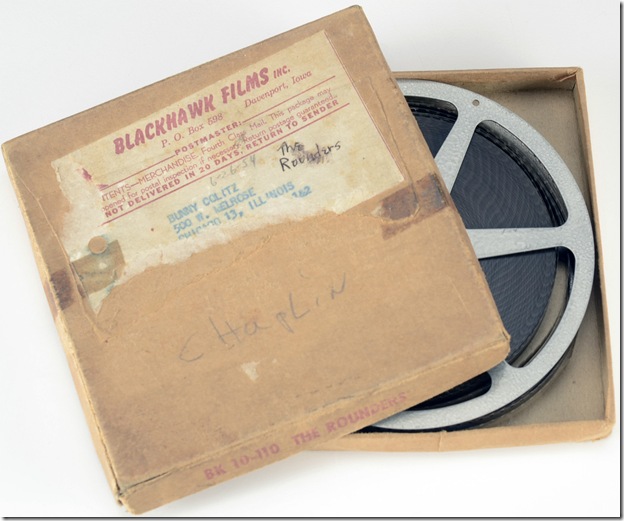 A Blackhawk film in all its low-tech glory is for sale on EBay with bids starting at $9.99. Note the lack of a ZIP Code in the address, which would peg the film as dating from the 1950s or early 1960s.

Many, many years ago, when I was a mere lad, I had a young friend who lived around the corner and was a fan of horror/monster films. Because his parents had money, they bought him a small library of Blackhawk’s prints of silent movies.

(Note to the millennial generation: Blackhawk was a film distributor based in Iowa that sold 8-millimeter dupes of many of the most popular silent films. This is what people did in the ancient days before VCRs and DVDs).

My friend and I and sometimes a few other chums would entertain ourselves in the basement watching “Hunchback of Notre Dame” while I provided a sort of musical accompaniment on their clunky old upright piano.

Seven or eight years later, I encountered my first Shakey’s Pizza Parlor, a chain restaurant which was then the rage. (I occasionally pass them in Los Angeles, so I know they are still around, but I haven’t been to one since the Nixon administration).

In the 1960s, the decor at a Shakey’s included an old, upright piano, with the front removed to show the hammers and strings, painted strange colors that glowed under a black light (I said it was the 1960s) and they would hire a piano player and a banjo player to entertain the crowd. (Yes, they wore straw hats and the whole bit).

There was also a changing lineup of – wait for it – silent movies, all early comedies. I dimly recall one that involved a gag about “Angels Flight” and another one that was purportedly by “Thrillem Films” or “Thrillum Filums” or something like that. (Undoubtedly the Daily Mirror brain trust can supply the names of both films based on those faint recollections).

To me, a silent movie with a “rinky-tink” piano and banjo accompaniment always evokes thoughts of Shakey’s Pizza Parlor – and they are not good thoughts.

I mention all of this because of the dreadful scores that were added to the Harold Lloyd films that recently aired on TCM.

One had music by Carl Davis and I realize, no, he can’t possibly score every silent film ever made. A couple were scored by the prolific Robert Israel, who does passable work, relying heavily  on snippets from the classics. (Truly, Israel does lots of work but I’m always disappointed when I see his name in the credits – as a film composer, I rate him a “meh.” Better than the awful music done on a synthesizer but not much).

At the bottom of the pile is the junk that has been slapped on some of the Harold Lloyd shorts that aired on TCM, like  “Lonesome Luke, Messenger Boy,” “By the Sad Sea Waves,” “A Gasoline Wedding,” etc. The music by an unidentified composer and musicians is the worst sort of generic pseudo-ragtime, with banjo (yes really), slide whistle and every other silent movie cliche you can think of – except, perhaps, a cowbell. This is generic, off the shelf music that has nothing to do with the action and nothing to do with anything, really.

I realize these early Lloyd movies aren’t subtle films, but I would rather watch them without any sound rather than listen to what has been done to them. It’s an insult to these movies to accompany them with this garbage.

I am retired from the Los Angeles Times
View all posts by lmharnisch →
This entry was posted in Film, Hollywood, Music and tagged #Harold Lloyd, #TCM, film music, hollywood. Bookmark the permalink.

10 Responses to A Note on Music for Silent Films