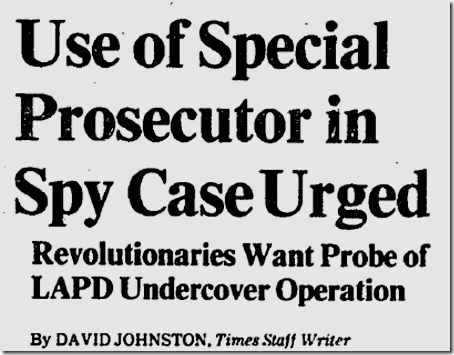 Dec. 11, 1982: David Johnston writes about the case of undercover LAPD Officer Fabian Lizarraga, who infiltrated the Revolutionary Communist Party and led protesters in a May Day march in 1980 that resulted in a fight with police and arrests of demonstrators.

Johnston also says that Lizarraga had sex “with a woman revolutionary” in hopes of getting information and was nearby when Damien Garcia, the man being investigated, was killed — allegedly by a member of the Primera Flats gang — at the Aliso Village Housing Project.

(Lizarraga also took a job in The Times circulation office in Whittier, but Johnston said that he never had the proper ID to gain access to the main buildings or the newsrooms. I can’t address what security was like in the late 1970s, but our current procedures didn’t begin until after 9/11).

In addition, Lt. Thomas Scheidecker of the LAPD’s Public Disorder Intelligence Division had opened an envelope sealed by court order containing information about LAPD infiltration of the radical group. In his defense, Scheidecker said his actions were “dumb” but explained that he was adding documents he deemed relevant.

“Gates’ letter came at a time when the focus of the case had turned from the conduct of the revolutionaries, who advocate the violent overthrow of the government, to the conduct of his department’s Public Disorder Intelligence Division,” especially Lizarraga and Scheidecker, Johnston wrote.

Attorneys Robert Mann and Jeff Lipow, who were defending the demonstrators, said they wanted a special prosecutor appointed to investigate the LAPD’s conduct, especially whether the man suspected of killing Garcia had any sort of relationship with officers.  The suspect, George Arellano, was in turn stabbed to death six weeks after Garcia was killed, Johnston said.

In January 1983, the Public Disorder Intelligence Division was abolished by the Police Commission. In January 1985, the commission voted not to take disciplinary action against top LAPD officials for the division’s conduct.

More about the Public Disorder Intelligence Division is here.

I am retired from the Los Angeles Times
View all posts by lmharnisch →
This entry was posted in 1982, Crime and Courts, LAPD, Millennial Moments and tagged #courts, lapd, revoltionaries, spying. Bookmark the permalink.