“Zoot Suit” is a powerful movie (because of the small budget, it is essentially a film of the play) and the historian in me kept whispering: “Look it up.”  Here’s a sample of what I found:

June 8, 1943: Servicemen and civilians block a streetcar on Main Street to remove a passenger wearing a zoot suit. 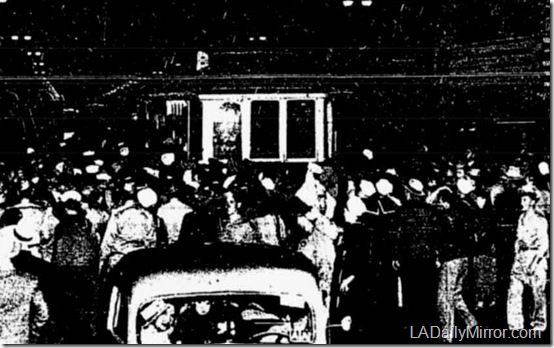 My curiosity was aroused by the gigantic newspaper headlines from the Los Angeles Examiner used in “Zoot Suit,” with production design by Tom H. John and set decoration by Fred S. Winston. Given the dates (1942-43) this would have certainly been during the era of City Editor Jim Richardson, whose ruthless coverage of the Black Dahlia killing remains a case study in the excesses of the press.

Specifically, I wondered whether he wrote about it in his autobiography “For the Life of Me,” which could carry the subtitle: “I was a better reporter drunk than you are sober and don’t you ever forget it.” As city editor, Richardson undoubtedly shaped the Examiner’s coverage of the Zoot Suit Riots.

Unfortunately,  Richardson doesn’t seem to have written anything about the incident. (Nor are the riots mentioned in two other reporters’ autobiographies of the era: Agness Underwood’s “Newspaperwoman” and Florabel Muir’s “Headline Happy.”)

So into the clips.

The earliest mention in The Times, on Feb. 6, 1942,  is a lighthearted look at zoot suits, which treats them as a sort of youthful fad. The men and women who wear zoot fashions are mostly defense workers, according to Henry McLemore, who visited the Trianon Ballroom, 2800 Firestone in South Gate. (With music by Bob Crosby!) It all sounds like white, middle-class entertainment. The Times notes in Feb. 12, 1942, item that a novelty song titled “Zoot Suit” has been recorded by Kay Kyser of “Three Little Fishies” fame. Not exactly Lalo Guerrero and “Los Chucos Suave.” 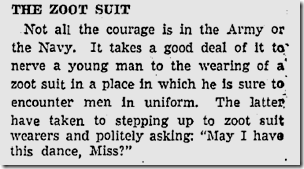 Attitudes toward the zoot suit hardened within months however. as reflected in this Lee Shippey column of April 2, 1942. And on Aug. 6, 1942, The Times noted that some men at “Glendale’s fighter control station” called their baggy coveralls “zoot suits.”

In September, the War Production Board prohibited the manufacture of zoot suits to conserve wool and the ban was extended to cotton, rayon and any fabric necessary for the war effort. For many people, zoot suits became symbol of waste and lack of patriotism. (I was about to say that the famous “Ike jacket” was introduced to conserve fabric — but that story is a little hard to confirm.)

By October  the zoot suit is no longer a harmless fad of defense workers blowing off steam after a shift at Vultee. It’s portrayed in The Times as the fashion of the outlaw, favored by violent Eastside Latino gangs. 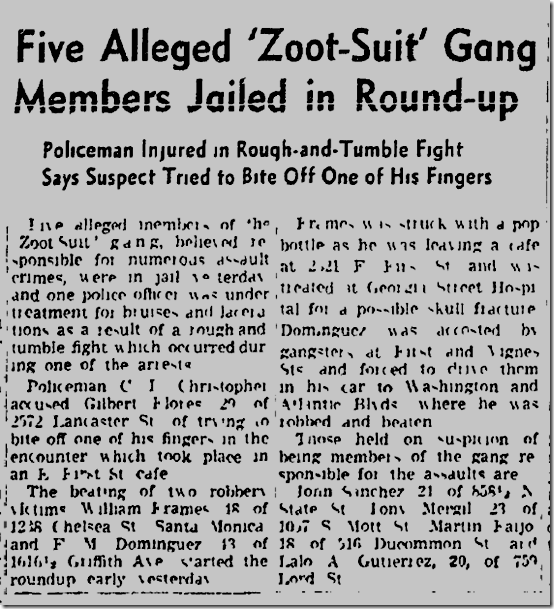 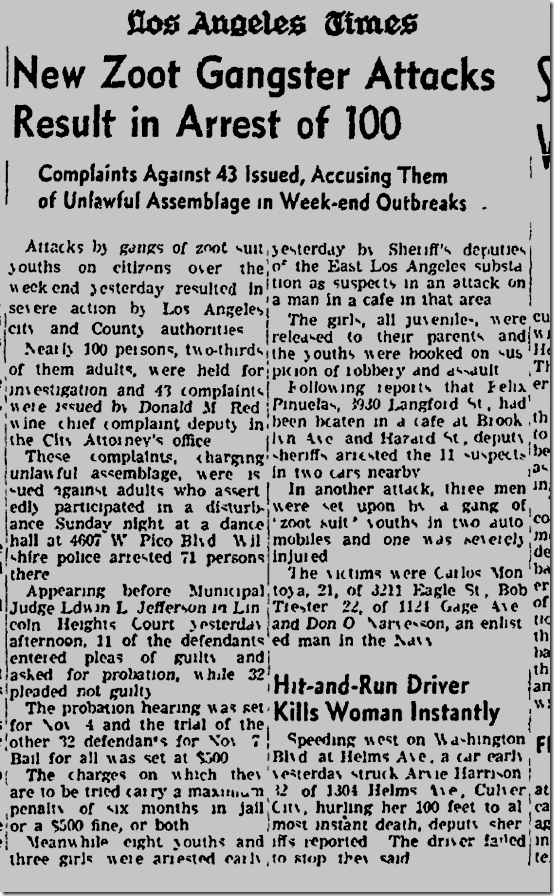 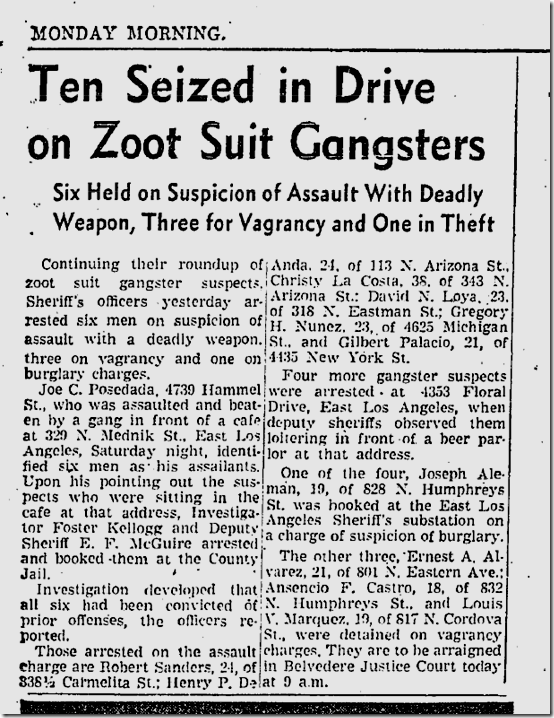 On the first anniversary of the Japanese attack on Pearl Harbor, the Mexican Youth Defense Committee meets with Los Angeles County Sheriff Eugene Biscailuz to protest mistreatment of Latino zoot-suiters. Notice this: “During a recent grand jury investigation of the situation … the inquisatorial body inferred the Mexicans are of an ‘inferior’ class.”  Biscailuz denied the accusations.

And the year concluded with one more crime by a zoot suit gang.