Posted on September 5, 2022 by lmharnisch

Produced and directed by Leo McCarey.

My Son John is available on DVD and Blu-ray from Amazon.

I picked My Son John somewhat at random. I knew about the ending but not much more. Spoiler alert: Robert Walker died during production of the film at the age of 32. His death scene was “borrowed” from Strangers on a Train. Walker is fascinating to watch. He plays John, the disaffected son of what’s presented as an all-American family. Helen Hayes, returning to the screen, and Dean Jagger are the parents, Richard Jaeckel and James Young as the younger brothers going off to Korea.

John has a mysterious job in Washington, levels a piercing humor at his father’s flag-waving and scoffs at the town padre’s religion. Could he be (gasp) a Communist? This is from the era of the Red Scare, so the answer is yes. He’s an atheist too, so swearing to his mother on a Bible that he’s not a Communist is meaningless for him. John might be the lefty sibling of Bruno in Strangers and I’m not sure another actor of the era could have pulled off this role to make the character charming and engaging while (at least in the film’s world) horribly misguided and tracked by the government (Van Heflin in a two-dimensional role as an FBI agent).

Did Bosley Crowther like it? I’m guessing he did not approve of such goings-on.

For her return to a full-length role after an absence of seventeen years, Helen Hayes has regrettably selected and permitted herself to be starred in an extraordinarily positive, impassioned and controversial film. My Son John, produced and directed (as well as planned and written, in part) by the talented Leo McCarey, who is best remembered for his Going My Way, is a picture so strongly dedicated to the purpose of the American anti-Communist purge that it seethes with the sort of emotionalism and illogic that is characteristic of so much thinking these days.

Update: This is Irene Winston. I’m a sucker for newspapers in movies!

For Tuesday, we have this mystery fellow. His mystery companion has been cropped out due to insufficient mysteriousness and will appear later in the week.

For “Aha Thursday,” we add the less mysterious companion.

Update: This is Todd Karns, left, and Van Heflin. 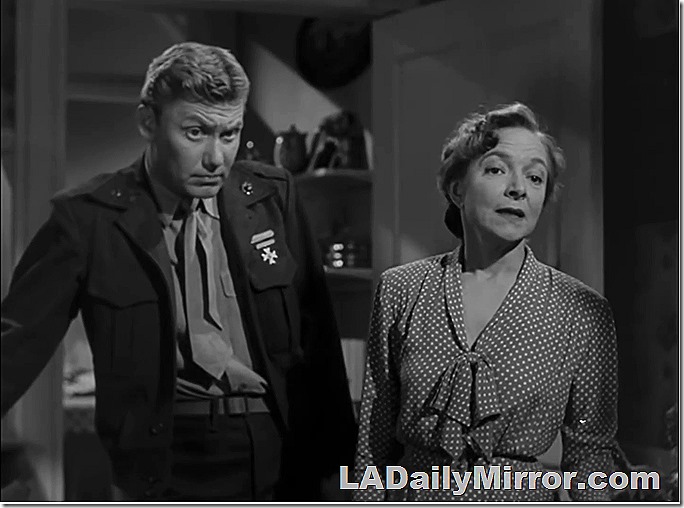 We also have this mystery fellow. His mystery companion has also been cropped out due to insufficient mysteriousness and will appear later in the week.

For Friday we add our mysterious leading lady.

Update: This is James Young and Helen Hayes.

For “Hm Wednesday,” Tuesday’s mystery fellow has a mysterious companion.

Update: This is James Young and Richard Jaeckel.

Also for “Aha Thursday,” we have this mystery padre.

Update: This is Frank McHugh.

Update: This is Dean Jagger.

Update: This is Robert Walker and Helen Hayes with her “goofy pills.”