Screenplay by Edith Sommer and Philip Dunne, based on the play by James Leo Herlihy and William Noble.

Blue Denim is available on DVD from Critics’ Choice Videos.

More information about the film is available from the AFI catalog.

Blue Denim began on Broadway (166 performances in 1958) with cast members Carol Lynley and Warren Berlinger reprising their stage roles in the film. IBDB strangely describes Blue Denim as a comedy, which it was not.

To some theatregoers, Blue Denim is the best American drama of the season. In comparison with The Dark at the Top of the Stairs, Look Homeward, Angel and The Rope Dancers, that evaluation gives Blue Denim a distinction it cannot sustain on artistic grounds. But it does indicate that James Leo Herlihy and William Noble have written an original and merciful drama that is superlatively well acted under Joshua Logan’s direction. Without being a thesis play, it does throw light on the difficult relationship of parents to adolescent children, and it does portray the agony that adolescent children bring on themselves when they blunder into adult situations.

Without seeing the play, it’s difficult to determine what happened in the translation to the screen except that it is a painfully dated treatment of a subject, abortion, that is as topical now as it was in 1959. Some portions of the film, notably the opening act, are extremely stagey and the dialogue seems to be lifted directly from the play. When Jessie Bartley (Marsha Hunt) asks her son, Arthur, and his friend Ernie (Warren Berlinger) “What exactly is biology?” the script is as vapid and contrived as a 1950s sitcom. In all, the parents seem as obtuse and clueless as the adults in Rebel Without a Cause (1955) without Jim Backus in an apron.

Of course Bosley Crowther is going to hate Blue Denim, even though he usually gives a few points for a film that originated on Broadway.

Things have certainly changed for high school students — the ones in movies, that is — since fun-loving Andy Hardy was the typical high school boy on the screen. in his day, the most serious problem a scriptwriter would throw at a kid was how to raise $8 to buy a jalopy or which of two girls to take to a prom.

Now, in Twentieth Century-Fox’s Blue Denim, which arrived at the Victoria yesterday, they blithely confront the schoolboy hero, who is even more of a tot than Andy was, with the desperate problem of having got his girl “in trouble” and having to raise $150 to pay for an abortion for her.

….It seems to us that Charles Brackett and Mr. Dunne, who produced and directed, respectively, have taken a tough, realistic little play with a tragic problem in it and cram it into the mold of a Hollywood family picture, with the problem never permitted to assume such logic or credibility that it cannot be resolved with a conveniently happy ending.

For Monday, we have a mystery fellow. Various mystery people in the photo have been cropped out due to insufficient mysteriousness and will appear later in the week. At that time, we will learn whether they approve of such goings-on. 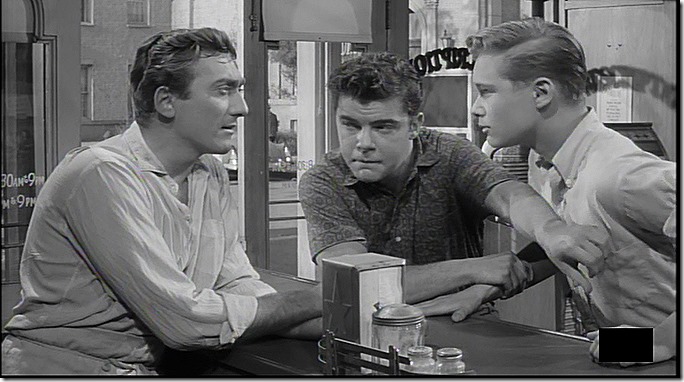 For Tuesday, we have a mysterious soda jerk. His mystery companions have been cropped out due to insufficient mysteriousness and will appear later in the week.

For “Hm Wednesday,” we have a pair of mystery guests.

Update: This is Warren Berlinger, Roberta Shore and Herb Alpert on trumpet.

For “Aha Thursday,” we have these mystery guests.

Update: This is Vaughn Taylor and Marsha Hunt.

And also this mystery woman. She does not approve of such goings-on.

Update: This is Nina Shipman.

Finally, we have mysterious 1950s J.R. “Bob” Dobbs dad, who spends the entire movie not approving of such goings-on.

Update: This is Macdonald Carey.

For Friday, we have a mystery couple. And a happy ending!

Update: This is Brandon de Wilde and Carol Lynley.