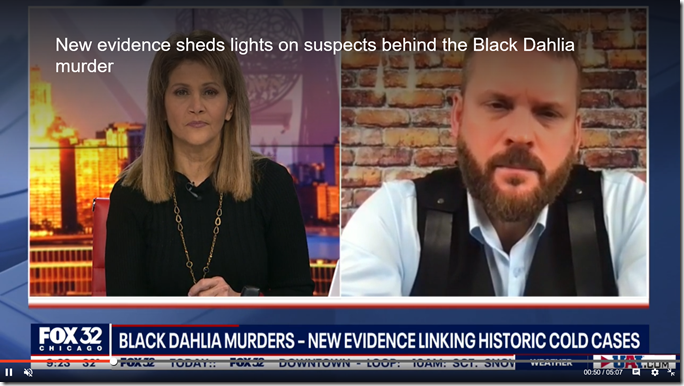 Oh dear. A self-styled “expert” has “new evidence” in the Black Dahlia case. I’m not even linking to this tacticool fool.

On the anniversary of Elizabeth Short’s murder, Chicagoland TV could apparently not resist some bizarre claims of “new evidence” in the Black Dahlia case, by a self-styled “expert.” Oh dear. Did they run their story past anyone who knows anything about the case? Well, this is Fox, so you can pretty much guess the answer is: “No, why would we do that?”

Note: If you are going to hang out your shingle as “solving” or “having new evidence” in the Black Dahlia killing, you better know the case forward and backward, upside down and right-side up, not just what’s been written about it in a couple of crackpot books, or what’s festering on the Web, ready to snare the unwary. 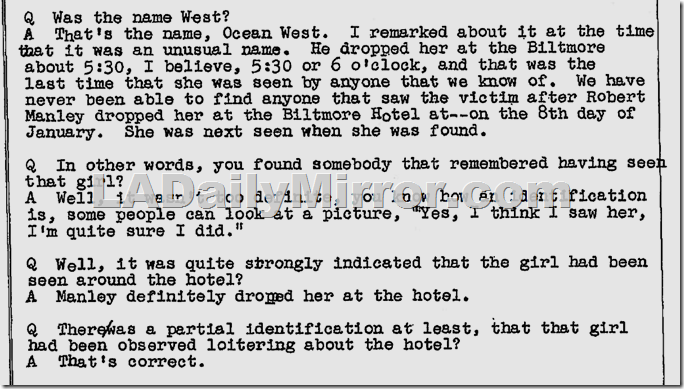 The Jan. 15 anniversary of Elizabeth Short’s murder was marked by two dubious events. The first was Steve Hodel insisting, as he often does, that there was no “lost week” and that there were numerous sightings of Elizabeth Short before her murder. As proof, he cites newspaper accounts of purported sightings — she was reportedly seen all over Los Angeles and in San Diego. And then in a bizarre twist of reason, he goes on to blame the press for creating the myth of the “lost week.”

The reality, which is what we deal with here, is that nobody saw Elizabeth Short after Robert Manley left her at the Biltmore on Jan. 9, 1947. Here we have the testimony of Homicide Detective Harry Hansen under oath before the Los Angeles County Grand Jury:

“We have never been able to find anyone that saw the victim after Robert Manley dropped her at the Biltmore Hotel at – on the 8th day of January (it was actually Jan. 9).”

I would expect Steve Hodel has seen this testimony – he certainly has access to it – so why he ignores it is beyond me.

In another trip to reality, I would note that Patrolwoman Myrl McBride, whom Steve Hodel interviewed many years after the fact, identified Elizabeth Short based on a description. When investigators showed McBride a photo of Elizabeth Short, she was far less confident in her story. The story, widely reported in the papers at the time, is long and the young woman wasn’t Elizabeth Short so I won’t rehash it here.

Executive summary on “new evidence” in the Black Dahlia case: Alex Baber, founder of Cold Case Consultants of America, has compiled a database of “serial killers’ letters” (no, I am not making this up). And he ran the so-called Black Dahlia letters through his Serial-Killer-Vac 3000 and determined similarities to other serial killers, both conveniently dead.

1) Only the first “letter” (addressed with cut-out letters and containing items from her purse) was from whoever killed Elizabeth Short. All the rest were pranks — All Of Them. Sorry, that means you, too, Black Dahlia Avenger. Think of it — a “true” crime franchise two decades in the making based on a prank letter.