I picked up “The Big Picture,” Melba Levick and Stanley Young’s 1988 book about Los Angeles murals, not realizing what a terribly sad book it would be. As Young notes: “Most artists are aware that, exposed as it is to the elements, both human and natural, there is a limited life-expectancy for any mural.”

I wanted it for one picture, specifically.

“The Big Picture” is listed on Amazon and Bookfinder. 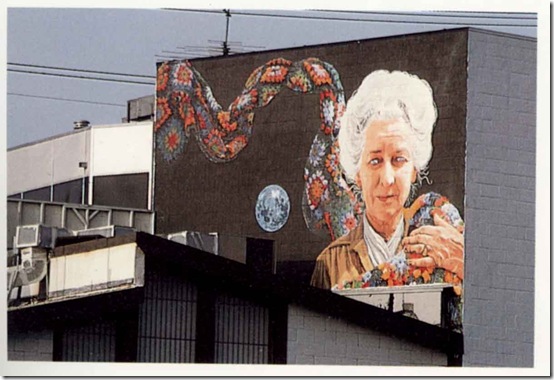 The picture I wanted was Kent Twitchell’s “Freeway Lady,” a destroyed artwork that was one of my favorites. Unfortunately, the book is a catalogue of murals that have either been blotted out or badly damaged by vandals and the elements.

More important, as we are debating super-graphics on large buildings, the book serves as a reminder of the enormous murals that were painted in downtown Los Angeles and in Hollywood as ads for Nike in a campaign by the Chiat-Day agency. 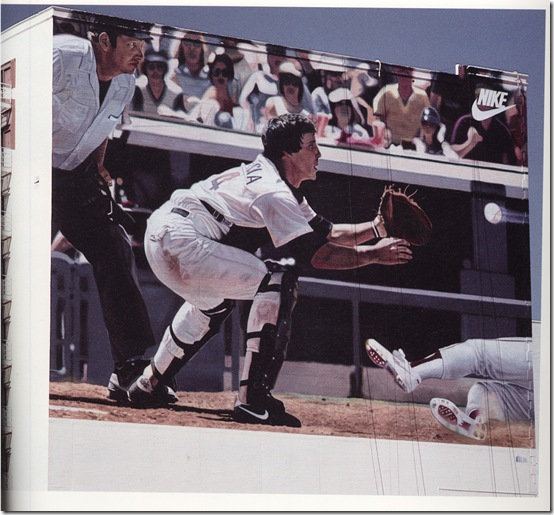 A gigantic mural titled “Baseball” by David Larks covers what was then the Bekins Building. The building is, of course, blank today.

And here’s John McEnroe by David Larks and Adam Lustig, looming over the Pantages Theatre.

And even the murals that survive are in terrible condition: 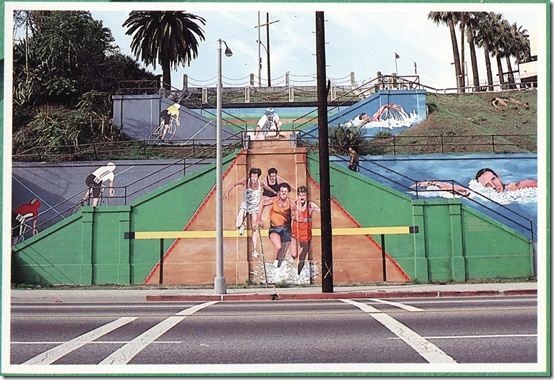 Here’s a particularly annoying example. I see Twitchell’s “Bride and Groom” and East Los Angeles Streetscapers’ “El Nuevo Fuego” every day because it’s on the Victor Clothing Building (formerly the City Hall Annex) next to The Times parking structure. Only now it looks like this:

I’m sure Levick and Young intended “The Big Picture” as a celebration of one of the great things about Los Angeles and instead it serves as a requiem for what is no more. Even “Ed Ruscha Monument,” which is on the cover, has been destroyed.  (Twitchell sued the U.S. and 11 other defendants for $1.1 million in 2008.) 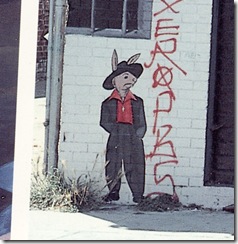 It’s important to note that “The Big Picture” also documents vernacular artwork found on the Eastside and Judy Baca’s famous “Great Wall,” in the San Fernando Valley, which has suffered its own type of destruction.

Is there any hope in all the gloom and doom?

After all, Baca told Patt Morrison last year: “We’re in the most destructive time ever in the history of murals in L.A.”

“Nino y Caballo” by Frank Romero is peeling and has been vandalized.

Well, I bought “The Big Picture” at the Last Bookstore, which just opened at Spring and 5th streets. So far, the shop seems to be popular. Is it too great a leap to see a connection between downtown’s rebirth and a renaissance in murals? I suppose so. Then again, I wonder what “Freeway Lady” would look like printed as a super-graphic and hung on the Hotel Figueroa.

Note: At last report, “Freeway Lady” is to be repainted on a section of the Student Services Building at Los Angeles Valley College.

I am retired from the Los Angeles Times
View all posts by lmharnisch →
This entry was posted in 1988, Architecture, Art & Artists, Books and Authors, Crime and Courts, Downtown, From the Stacks, Hollywood, Latinos, Photography, Preservation, San Fernando Valley, Sports, Zoot Suit and tagged #hollywood, #la, #photography, Architecture. Bookmark the permalink.
%d bloggers like this: