The exterior of Paulais at Hollywood Boulevard and Las Palmas, c. 1925. Courtesy of the University of Southern California Libraries and the California Historical Society.

The 1920s Jazz Age brought high-spirited verve, flamboyance and progressivism in reaction to the haunting death and destruction of World War I. Blending eclectic cultural elements, eye-catching colors, and lavish ornamentation, design of virtually every type reflected the more optimistic and exuberant period.

Dessert shops and cafes combined lavish decoration and sweet treats, appealing to all the senses. Why just buy treats when one could enjoy luxurious and upscale furnishings suggesting plentiful times for everyone? Henry G. Mosler and Saul Magnus’ Hollywood branch of their Paulais Cafe did just that, reflecting the jazz-mad time in its lush and stylish interiors. Two years before the opening of the Pig’N Whistle on Hollywood Boulevard, Paulais brought high-end elegance to dessert just east of the Egyptian Theatre.

The shops at Hollywood Boulevard and Las Palmas.

The Hollywood branch of Paulais reflected the cosmopolitan elegance of its two owners, Saul Magnus and Henry G. Mosler. Born in 1887, the son of well-to-do Cincinnati whiskey merchant Joseph Magnus, the young Magnus worked in his father’s businesses and served in World War I before buying Christopher’s Cafe and Candy Shop at 741 S. Broadway in downtown Los Angeles in 1920. His co-partner and former Cincinnati resident Henry G. Mosler was born in Ohio in 1888, working for his father’s Mosler Safe Co. before going into business on his own and forming the business partnership in 1920.

Spending $100,000, they purchased and remodeled Christopher’s into the upscale Paulais, offering meals, desserts, candy, ice cream, and confections, opening in 1921. Growing success led them to open branches in the Ambassador Hotel and at Wilshire and Western by the mid-1920s. In 1924, they decided to branch out to Hollywood, opening an opulent store representing the exploding success of the neighborhood and its world-famous motion picture industry.

In February 1923, newspapers announced that the team had purchased a 25-year lease on 6702 Hollywood Blvd. for $500,000 just east of the Egyptian Theatre, with 60 feet of Hollywood Boulevard frontage to Las Palmas Avenue. The May 26 Hollywood Citizen reported the hiring of Edward Klarquist as architect for a four-story building featuring “elaborate interior decoration,” including $125,000 for first-floor furnishings. A year later, newspapers stated that the men had purchased a 99-year lease costing $1.6 million on the property, formerly owned by Eulalie Grass. Permits at this time reveal McNeil Swasey as architect and Joseph Emanuel as interior designer. Emanuel would create lush interiors for the Hollywood I. Magnin Department Store to open a few years later.

A September 22 Hollywood Citizen story described the swanky, colorful interior two weeks before its October 8, 1924, opening. The Venetian Renaissance-style building would feature mineral-stained blocks on the exterior “giving the appearance of an old weather-worn surface,” with encrusted Venetian medallions to add a showy touch. Display windows equipped with electricity, gas, and water could create elaborate effects, while the establishment also featured wrought-iron doors at the entrance with a gold-relief ceiling.

The interior would include tea room, fountain room, and men and women’s club and dressing rooms on the mezzanine. Electrical elevators would lift customers to this floor as would a rear staircase decorated with leaded cathedral windows. The basement would include the kitchen, refrigeration, and supply rooms. Ventilated pastry and confectionary display cases would line the left side of the fountain room with a 135-foot-long fountain, which featured walnut armchairs at a normal height from the floor. “Smartly immaculate attendants” would offer impeccable service to their clients. Imported tapestries would frame a stone fountain at the rear of the room designed by Richard Zeitner reproducing “The Spirit of the Woods.”

Paulais’ snappy color scheme would rival any peacock’s. “The color background for the tea room is Venetian green with hand decorated ceiling beams and Venetian canopies over the entrances. Upholstering will be of a canary yellow and blue stripped (sic) design with a narrow line of Morocco red outlining the stripes. A separate room in the same design adjoining the main tea room will accommodate small parties.” 200 employees could serve 8,000 guests daily in the swanky interior, which seated 475.

Paulais’ October 9 Hollywood Citizen News ad trumpeted Magnus and Mosler branding their restaurant as special, calling it a “confectaurant,” “…a new and superior arrangement for pleasing the varying moods and tastes of discriminating epicures. It combines the priceless atmosphere of great dining rooms with the excellent cuisine of masters…all at moderate prices…a palace of fine foods and unobtrusive service…of excellent appointments and a cuisine characteristic of those well trained.” 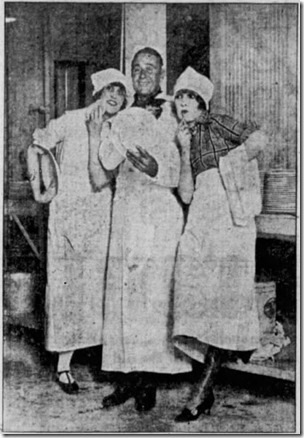 Over the next few years, Paulais served meals and decadent desserts to guests shopping or attending the adjacent Egyptian Theatre, along with selling catering, confections, and candy as well as hosting social and business groups in their private rooms. Families came for special holiday meals at times like Easter, Thanksgiving, and Christmas as well. When the Pig’N Whistle threw open its doors at 6714 Hollywood Blvd. in 1927, Paulais suffered. Beautiful but not as elaborate as Paulais, Pig’N Whistle’s cheaper prices and newness drew customers away, badly hurting business.

Though the cafe reconfigured somewhat in the spring of 1928, revenue remained depressed, leading Magnus and Mosler to close Paulais that year. After general remodeling, the establishment reopened as Leighton’s Cafe and Coffee Shop at the end of 1928 before closing in 1930 after the stock market crash. Film producer Charles Christile purchased the store, converting it into Eggers’ Dollar Store in 1931. Investors bought him out, but lasted only three years before they too closed. New owners converted 6702 Hollywood Blvd. into Central Hardware in 1934, surviving six years before Union Pacific Railroad purchased the location for a Hollywood ticket office, remaining in business at least through the 1970s. After the Egyptian Theatre underwent extensive renovations in the 1990s, the former Paulais’ location hosted many small cafes and sandwich shops, none of which gained much traction, and now sits empty.

Magnus and Mosler slowly closed or sold out their remaining stores by 1930 as initial costs overwhelmed their investment. New owners moved the former Ambassador store to 7th Street in 1933, remaining in business until 1937.

Though Magnus and Mosler’s extravagant designs and costs exceeded their ambitions and dreams, for almost four years they operated Hollywood and Los Angeles’ most discerning dessert establishment, as gorgeous and eye-filling as any French pastry.