Unknown by most classic film fans, character actor John George achieved minor success in moving pictures through sheer determination. Immigrating to the United States in 1912, George spoke little to no English and suffered from a physical deformity. Always seizing an opportunity, he exhibited courage in fitting in, surviving, finding a career, and making a home for himself during a time when Americans denigrated and turned away from those who traveled from the very shores from which they and their families had themselves come.

Born January 20, 1898, in Aleppo, Syria, under either the name Tewfia Fathella or Tufei Fithela, George survived under the Ottoman Empire. Each area ruled itself, with religious enclaves breaking down the population still further. George struggled to fit in, suffering from a physical deformity that led to a hunched back and short height, a little person. 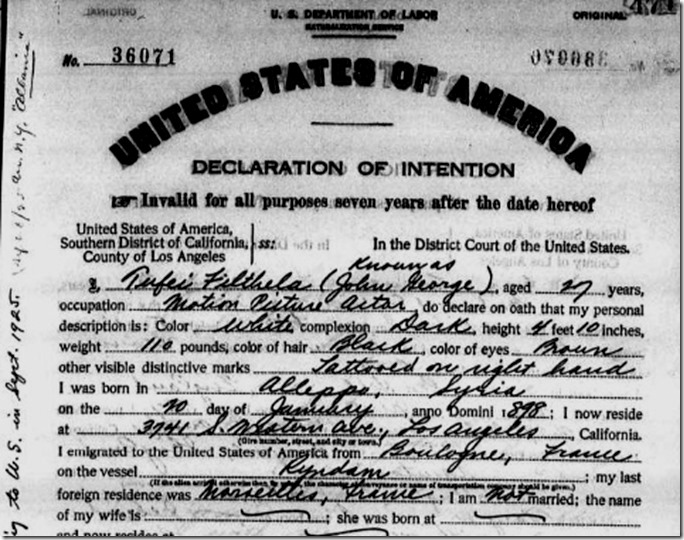 Some writers say that his mother and sisters immigrated to the United States in the mid-1900s, leaving him behind. Immigration records however, reveal that George and his mother, Louisa Mossaly, traveled via the SS Ryndam from Boulogne, France, to New York City, arriving April 9, 1912. Like all immigrants arriving in New York at the time, the two disembarked at Ellis Island, where they endured examinations for illness, before entering the country. At this time, three-quarters of the population of New York City consisted of immigrants or first-generation Americans.

By 1916, George arrived in Los Angeles, alone. Few records survive to document his name change, residence, and occupation before coming to the bustling new metropolis, exploding in size thanks to the the establishment of motion picture production companies. Like many others, George saw opportunity in the burgeoning field which required courage and initiative. Impressing casting people at the studio, George quickly found himself working at Universal Film Manufacturing Company, gaining small parts in their films. Unlike many others typecast for their looks or disability, such as Mrs. Louise Emmons and former boxer Steve “Broken Nose” Murphy, George mostly landed roles as a regular person, part of a neighborhood, crowd, or gang.

Fast-rising Irish director Rex Ingram noticed the intense Syrian at the studio, hiring him for his new moving picture “The Chalice of Sorrow,” the first of many pictures in which he would cast the diminutive man, finding him almost a good luck charm. In September, trade magazine Motography reported that Universal had signed the actor “to play hunchback parts in general stock.” Several trades later stated that young George would play a lead in Ingram’s film “The Crystal” that fall, perhaps renamed “Black Orchids” upon release in 1917.

A fast-rising Universal actor named Lon Chaney recognized George’s talent as they worked together on the studio’s “Triumph” in 1917, the 1921 crime thriller “Outside the Law,” and the literary adaptation “The Hunchback of Notre Dame” in 1923. Impressed with his work, Chaney and MGM director Tod Browning would go on to cast George in the 1927 film “The Unknown,” for which he received good notices. Though his parts were often brief, George grabbed audience attention.

Many felt drawn to the intense actor, reporting on his work in newspapers and trades, noting his Arabic background but differing on his nationality. One story stated, “His name is Tufei Fadhalla (sic), and they call him “John George” for short.” On October 21, 1921, the Hanford Sentinel stated “John George is remarkable as a type and convincing in his work” in the Selig animal serial “Miracles of the Jungle.” The October 11, 1923, Humboldt Times story, “The Actor Is Real Star,” also noted he spoke five languages: Arabic, Turkish, English, Egyptian, and French. The Hollywood Vagabond noted that George “appears in an interesting role” in Chaney circus film “The Unknown.”

George received praise and recognition for his work in the United Artists picture “The Night of Love” from the studio and newspapers. The press book for the film acknowledged his work in a canned story. “John George, well known character actor, plays the jester in “The Night of Love,” investing the role with as much pathos and sympathetic appeal as comedy side light,” which ran word for word in the June 4, 1927, Sausalito News. Film Spectator wrote that “he gives a worthy performance.”

In 1929, Picture Play magazine devoted a story to George, who they claimed was born 40 miles from Jerusalem. Praising his acting and skill, the story concluded, “I hope Texas Guinan reads this story and that every time she sees John George on the screen she rises and shouts, “Come on folks, give this fellow a hand! Because he deserves it.”

At the same time, George’s intensity and boldness sometimes landed him in trouble. Ingram sent him back to the United States after problems during the filming of “The Magician” in France in 1926. Variety also reported that summer that George was “found guilty of having annoyed Mrs. Ann Coogan in a Hollywood picture theater,” perhaps coded wording for harassment.

Working in small bits and character parts, George often struggled to pay bills, moving virtually every year between apartments in Hollywood. While he mostly served to add color to films, George continued to receive good notices for such titles as “Don Juan” (1926), “Island of Lost Souls” (1932), and “Trick for Trick” (1933). Many of these 1930s films, often horror stories or thrillers, featured him as a magician’s assistant, jester, beggar, bum, or even barfly, mostly nonspeaking. In the 1940s and 1950s, George often appeared in film noirs and westerns, now often playing vendors and newspaper sellers, and continued acting into the 1960s in extra bits in TV westerns.

Unusual during this period of classic Hollywood, George rarely found himself cast in a role disparaging his disability, mostly playing regular people accepted into the society or group with which they found themselves. Did George’s strong beliefs prevent him from accepting undignified roles, or did others recognize and honor his strength with nice straight parts?

Unlike many actors of the 1910s, George continued working virtually until the end of his life, eventually earning 231 credits. Dying August 25, 1968, the hardworking George demonstrated the strength, determination, and discipline of most immigrants, dedicating their lives to bettering both themselves and their newly adopted country.