Screenplay by Paddy Chayefsky, based on his play as presented on Broadway by Joshua Logan.

“Middle of the Night” is available on DVD from Amazon.

B.J. Merholz dropped a note recalling a production of “Middle of the Night” that he directed in 1959. And here it is.

I picked “Middle of the Night” by rooting around in Lantern for movies released in 1959 until I found something that sounded interesting. “Middle of the NIght” has aired on TCM in the last 25 years, most recently in 2019.

“Middle of the Night” makes a good mystery movie because it was shot in New York using several members of the original Broadway cast (Betty Walker, Martin Balsam, Effie Afton and Lee Philips) and other local actors, less familiar than the Hollywood faces.

According to the AFI catalog, “Middle of the Night” was performed as a one-hour teleplay in 1954, directed by Mann, with Eva Marie Saint and E.G. Marshall. It opened on Broadway in 1956 for 477 performances, starring Edward G. Robinson and Gena Rowlands.

Let’s see which New York Times critic hated it…. Oh, Bosley Crowther. This should be interesting….

In the first place, the garment manufacturer that a hard-working Fredric March plays looks a little too old and doddering to be taking a 24-year-old bride. And the young lady, played by Kim Novak, seems too much of a badly mixed-up kid to be settling down quietly with a grandpa on West End Avenue.

…. In this respect, the picture has more to offer than did the play. The characters are more intense and driven by their lonely and neurotic moods. They fumble and paw at each other in a more avid and frenzied way, and their squabbles and indecision are more violent and sweaty with pain. Mr. Chayefsky and Delbert Mann, the director, have worked for the taut, dramatic thing. They haven’t wasted much time on humor. This is loneliness, boy, and it is grim.

….Mr. March is an excellent actor when it comes to showing joy and distress, but he isn’t successful at pretending to be a Jewish papa and businessman. He goes with the flavor of his family, which is very colloquially played by Edith Meiser, Joan Copeland and Martin Balsam, about as poorly as spoonbread goes with lox.

There’s more, but you get the idea.

For Monday, we have a mystery woman. Her companion, Back of the Head Guy, has been cropped out due to lack of mysteriousness and will appear Friday.

Update: For Friday, we add Back of the Head Guy No. 1.

Update: This is Betty Walker with Fredric March as Back of the Head Guy.

For Tuesday, we have another mystery woman. Her companion, Back of the Head Guy II, has been cropped out due to lack of mysteriousness, and will appear for “Aha Thursday.”

For “Aha Thursday,” I’m adding Back of the Head Guy II.

Update: This is Martin Balsam as Back of the Head Guy II with Joan Copeland. 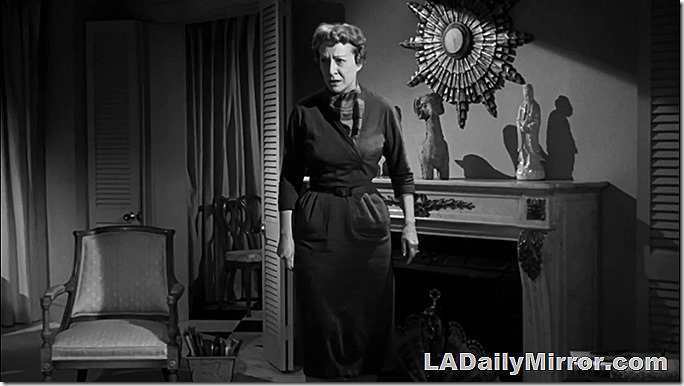 Update: This is Edith Meiser.

Also for “Hm Wednesday,” we have a mystery gent wearing a skinny necktie. Back of the Head Woman has been cropped out due to insufficient mysteriousness and will appear Friday.

Update: For Friday, we add Back of the Head Woman.

Update: This is Kim Novak as Back of the Head Woman, with Lee Philips. 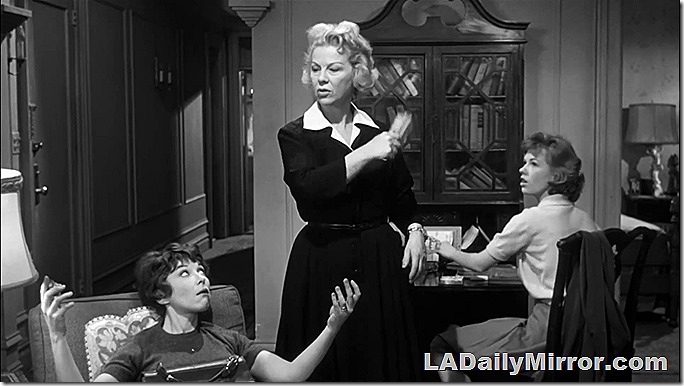 For “Aha Thursday,” we have three mystery women.

Update: This is Lee Grant, Glenda Farrell and Jan Norris.

We also have Tuesday’s Back of the Head Guy II.

Update: This is Martin Balsam.

For Friday, we have a group of mystery gents. 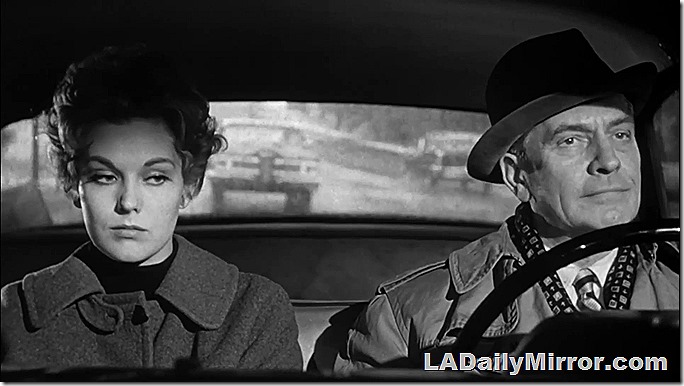 And finally, we have our mysterious leading lady and leading man.

Update: This is Kim Novak and Fredric March being photobombed by an Edsel.