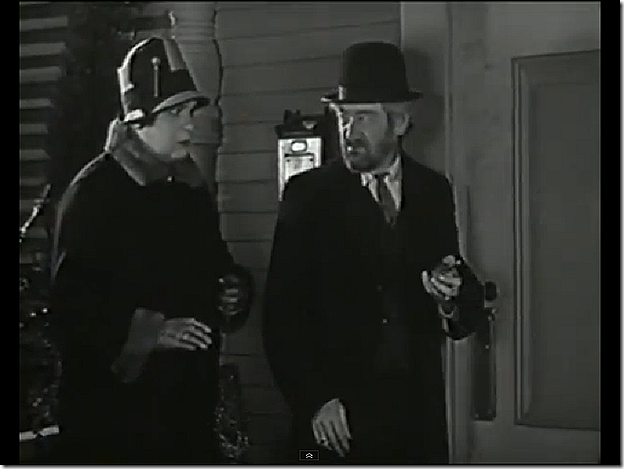 Photo: Lillian Elliott and Max Davidson in “Call of the Cuckoo.”

America has always been the land of immigrants. From when this part of the world was a mere colony to other countries, this nation has been a haven for the oppressed, weak, and dreamers, and grew mightily with this influx of people. The largest years of immigration occurred from the late 1800s into the early decades of the twentieth century. New forms of entertainment like vaudeville arose, catering to many of these immigrants, and employing ethnic humor. Many ethnic groups such as Italians, “Dutch” or German, and Jews,were stereotyped or parodied through dialect, expression, or movement in a way that revealed the common foibles of each group, how alike each were. Most of these stereotypes were carried over into film, with people like Weber and Fields excelling as “Dutch” comedians and George Beban as Italian.

One of the greatest Jewish dialect comedians of the early film industry was a German Jew by the name of Max Davidson. Originally from Berlin, he immigrated to America at the turn of the twentieth century, and began barnstorming the country appearing on the stage and then in vaudeville. Supposedly while acting with a Kentucky troupe, Davidson met future director D. W. Griffith. Griffith’s first wife, Linda Arvidson, claimed in her 1925 memoir that Davidson lured Griffith into films around 1907, suggesting he write scripts for the company that employed Davidson. Documentation suggests that the comedian did not enter films until around 1912, however.

Only five feet four, Davidson maintained the same look and mannerisms for his entire career. An eternal immigrant, Davidson wore a customary black suit and derby hat, along with a curly beard. His mannerisms endeared him to audiences; many could identify with the upturned hands representing a questioning look or lack of money, slaps on the cheek suggesting Oy vey, why me?, a pull at the beard when thinking. Davidson emitted warmth and integrity, drawing audience sympathy.

Davidson did appear in such major features as “Intolerance,” “Mortal Storm,” and “Reap the Wild Wind” in minor roles, but he is more remembered for his quizzical father or hardworking shopkeeper in over a hundred shorts. In the mid-teens, he appeared in “Izzy” comedies playing Izzy, often with Fay Tincher and the future director Tod Browning as co-stars. Davidson starred in “The Record Breaker” for Kalem in 1914 playing a gambler, with the same co-stars. In 1918, Davidson appeared in “The Hun Within” with Dorothy Gish and Erich von Stroheim.

While appearing in films, the actor also occasionally acted on stage, and he starred in the original Los Angeles version of “Abie’s Irish Rose” in 1922, for which he and a few other cast members received the best notices for being true to life.

Film scripts usually called for Davidson to portray tailors, shopkeepers, rag men, jewelers; hard working, middle class men just trying to get by. Reviewers and moviegoers loved him. The 1923 Film Daily praised him for his work as a shoemaker in “The Darling of New York” starring Baby Peggy. The July 15, 1925, Los Angeles Times proclaimed, “Max Davidson, than whom nobody has a greater reputation as a portrayer of Hebrew roles on the screen, has signed to play in Jackie Coogan’s new picture, “Old Clothes.” The New York Times called him “splendid” in the role upon release. In “Rag Man” with Coogan, the Herald Tribune reported, “If young Coogan were not a first rate actor all of the honors of the picture would have been carried away by Max Davidson. It is doubtful if a more ingratiating portrayal of a Jewish character role has yet found its way to the cinema.”

Hal Roach signed the comic actor in 1926 to appear alongside others in comedy shorts. The October 3, 1926, Los Angeles Times noted, “Although not hailed as outstanding character artists of the industry, Max Davidson, Charlotte Mineau and Fred Malatesta have been accountable for some of the finest performances in dramatic features which the screen has seen. Davidson particularly has been famous for his Jewish characterizations.”

By 1927, Roach signed the actor to a long term contract, with Leo McCarey assigned to direct his films, many of which starred Spec O’Donnell as his son. A young, freckle faced kid, the laid back O’Donnell possessed great chemistry with the expressive Davidson, creating a realistic, loving but annoying father son act. Film Daily gave him excellent reviews in pictures. For “Why Girls Say No” and “Jewish Prudence,” the trade stated, “Max Davidson’s antics as the father in the case are worth the price of admission alone.” They called “Pass the Gravy” “100% entertainment.” A 1928 special MGM exhibitor edition of Film Daily quoted an exhibitor, “You are the best comedian in two-reelers, bar none, and it is a pleasure to see your facial studies on the screen. You can come as often as you like.”

Davidson reached his apex of fame in these years, starring in his own series of shorts and garnering fine notices. His personal life also soared. The January 14, 1927, Los Angeles Times reported that he married school teacher Alice Marti of Honolulu. The bride listed her age as 42 and the groom as 51. They would reside at the Wilton Apartments, 5657 Hollywood Blvd. while awaiting completion of alterations to the 1538 Beverly Drive, Beverly Hills home.

With the arrival of sound, however, ethnic humor slowly began declining onscreen, with ethnic groups panning humor they had enjoyed just a few years before, Studios moved away from broad stereotypes and ethnic series, consigning these characters to minor roles instead. Davidson went from starring in his own series to first freelancing in comedy shorts, and within a few years, playing tiny bits and extra roles.

By 1932, Davidson and Spec O’Donnell also appeared in vaudeville acts put together by Bud Murray of the Bud Murray School for Stage and Screen, which also arranged an act in which Leon Janney toured. Davidson also occasionally appeared at the Masquers Club to augment his small film roles.

The actor died virtually alone and forgotten at the age of 75 in 1950, but has gained a large fan base in the last several years, thanks to screenings of his films at festivals like Pordenone, Slapsticon, and Cinecon. In 2012, the Edition Filmmuseum released a DVD set of Davidson shorts, helping spread the word about the talented comic.

I am retired from the Los Angeles Times
View all posts by lmharnisch →
This entry was posted in Film, Hollywood, Hollywood Heights, Mary Mallory and tagged #Laurel and Hardy, film, hollywood, Mary Mallory, Max Davidson. Bookmark the permalink.