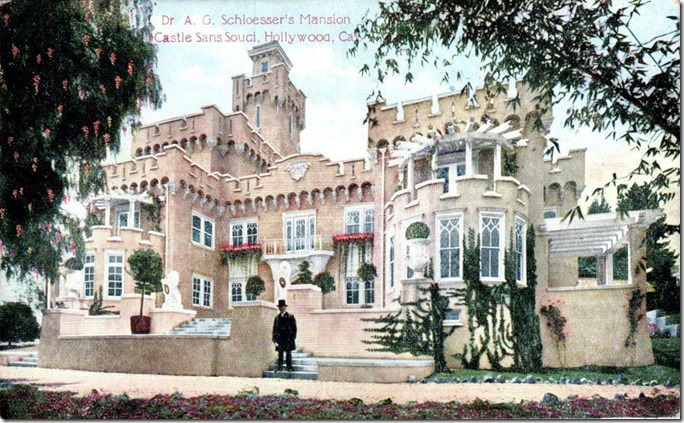 A postcard of A.G. Schloesser’s Castle San Souci, listed on EBay for $7.98.

Before movies introduced dream-like locations and visions to the world, Dr. Alfred Schloesser constructed stunning fantasy castles, mentally transporting viewers to more romantic times and places. Although Glengarry Castle and Castle Sans Souci existed for only a few decades, they left an indelible impression on the city of Hollywood.

Born in Chicago on April 19, 1851, Dr. Alfred Guido Rudolph Schloesser lived and dreamed large from a young age. Born to naturalized Americans who had escaped oppressive Prussia and then achieved success in Chicago real estate, Schloesser graduated from respected high end schools before receiving graduate and medical degrees. He graduated Rush Medical College at 20, the youngest as well as first in the class. After graduation, Schloesser toured Europe, gaining additional knowledge and experience, studying tuberculosis in Berlin and spinal deformities in Switzerland. 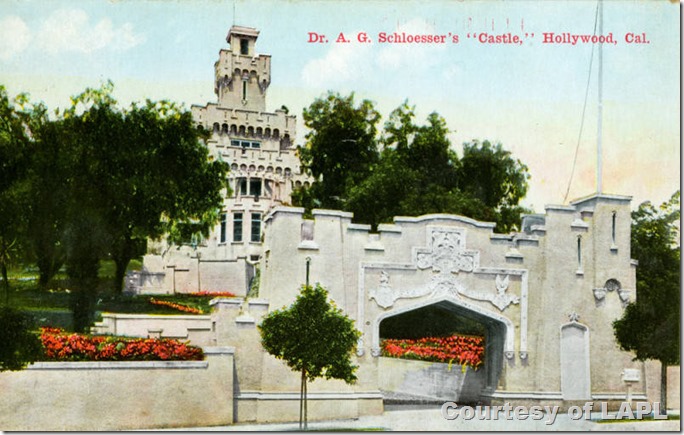 Returning to America, Schloesser served as a physician in Chicago for 15 years while balancing a real estate portfolio, He earned his own small fortune investing in the Hayden Hill mine in Lassen County in 1894. Schloesser and his wife, Emma, grew to love Los Angeles in the late 1890s after visiting her brother, a resident of the area. Moving to the city in 1899, Schloesser served as a physician while slowly spending more of his time in investments and real estate. In books such as “Who’s Who of the Pacific Coast,” Schloesser pridefully promoted his royal background, stating that he descended from “Count von Hopffgarten, Lord Chamberlain of Frederick William II of Prussia,” and the captain of Alexander’s regiment.

Like Harvey and Daieda Wilcox, Schloesser fell in love with the rolling hills and valleys of little Hollywood in the early 1900s. Moving quickly, he purchased acreage around what is now Franklin, Argyle, and Vine Streets in 1904 to establish his own real estate tract named Schloesser Terrace. Schloesser ran newspaper ads early that year promoting his new 20-lot tract, calling Hollywood, “The Queen City of Southern California,” the perfect suburb in which to build a new home.

Residents could erect their own homes, or buy complete small farms with residence and outbuildings. As a special amenity, Schloesser announced intentions to build Apollo Hall on the tract, a special entertainment venue featuring a large pipe organ to host dances, concerts, and theatricals, with bell chimes to strike on the hour and half-hour. Schloesser and his wife loved the arts, attending concerts, opera, and theatricals, and building his own performing arts center would further bring culture to Hollywood.

Like any great real estate man, Schloesser possessed enormous self-confidence and braggadocio, announcing his projects the best, the largest, most desirable. At the same time, he loved making an ostentatious display of wealth. Schloesser gave reports to the newspapers on all his various trips around the world, from the Arctic Circle to the Equator to Europe, particularly his meetings and social gatherings with royalty and celebrities like Theodore Roosevelt. To cement his status as Hollywood power mogul, Schloesser would erect a massive mansion to dwarf anything in the city. Long before William Randolph Hearst would construct Hearst Castle, Schloesser collected his own rare antiques and art to fill his elaborate Xanadu.

The September 13, 1908 Los Angeles Times announced Schloesser’s grand ambitions to construct a stunning mansion on his tract, at the northwest corner of Franklin Avenue and Grand View Boulevard to be called “Glengarry,” after the ancestral castle of his wife’s family near Inverness, Scotland. While large, this castle served only as forerunner to a more enormous, magnificent structure. Architectural firm Dennis & Farwell would design both Glengarry and its larger brother.

A postcard of A.G. Schloesser’s Glengarry from the Security Pacific National Bank Collection, via the Los Angeles Public Library.

Composed of heavy plaster to hold twelve large rooms, Glengarry would feature a medieval entrance hall with huge fireplace and bays, outfitted with “heavy-beamed ceilings, and high-wainscotted walls, with numerous shields, and suits of armor… .” Huge tapestries would line the walls, art from Italy and Germany would fill space, with special lighting hidden within vintage torches. Stained-glass art windows collected in Europe would highlight other areas of the home. Five bedrooms and baths would occupy the second floor, along with guest rooms featuring Murphy beds. The tower would include den and billiards room.

The large garden contained manicured lawns with an Italian fountain and rare plants from Europe. Glengarry’s entrance doorways would replicate Bremen, Germany’s “famous” City Hall entrance. Adding a special touch, two enormous 150-year-old Carrara marble lions from outside a cardinal’s residence outside Venice, Italy would flank the front door. After opening, Glengarry would host cultural gatherings of all types: symphonic concerts, opera recitals, theatricals, dance performances, and even special club meetings, a lavish location at which to entertain. Magazines such as Out West, and Homes and Gardens of the Pacific Coast included spreads on the lush estate. Some even mentioned it as a premiere tourist attraction.

Two and years later, Schloesser announced plans to construct a new massive castle across the street from Glengarry. Newspapers once again ran illustrations of the fantastic building, to be called Sans Souci, “Without Worry.” The November 13, 1910 Los Angeles Times stated that Dr. Schloesser asserted “that he regards “Glengary (sic),” his present stately castle dwelling at the northwest corner of Franklin and Argyle avenues, as a satisfactory architectural experiment only, and that he has had a larger place in mind all the time.” The Gothic Tudor building combined, “as it does in its lines, suggestions from the ancient buildings of the University of Oxford, Glengary (sic) Castle in Scotland, and a bit of the Gothic element from the Neurenberg (sic) Castle in Germany.” 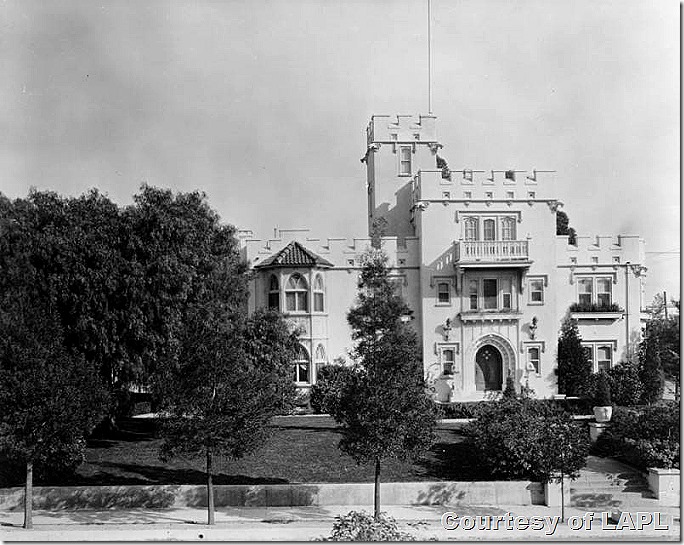 A grander residence required even more elaborate decorations, with a long, winding drive and huge brick “antique” wall surrounding the estate, accentuated by a “great Gothic gateway” entrance. A series of terraces would lead up to the castle, with the highest 50 feet by 20 feet and paved in brick. Grounds would extend 600 feet from Argyle. Nils Emitslof, “formerly landscape artist of the czar of Russia, creator of Queen Victoria’s Windsor orchid beds…” designed elaborate, landscaped gardens to rival those in Europe. The medieval castle’s tower would provide views to the ocean and Los Angeles.

The citadel’s entrance would lead “through an open, arcaded cloister into a Gothic hall, 50 feet by 25 feet, finished in oak, and with a heavily-beamed ceiling 25 feet above the floor.” Gothic windows high above niches filled with suits of armor would flank a massive stone fireplace. Stained glass with art depicting knights in the time of chivalry would fill the windows. Art would dominate a massive gallery, with a pipe organ at the opposite end. Louis XV furniture would decorate reception rooms, each designed after a different time period and style. Tapestries, art, and prints collected throughout Schloesser’s travels would line the walls.

Time arranging financing, planning, and design delayed construction until late summer 1911 however. The September 1911 Los Angeles Times reported that a permit for a 12-room home costing $16,000 had finally been pulled by Schloesser. Construction cost and size would explode beyond estimates in creating the lavish estate. Once completed in 1912, Schloesser put Glengarry up for sale, completely furnished.

Castle Glengarry sold for $100,000 October 7, 1912, to New York banker J. F. Riley to serve as he and his mother’s winter residence. Within a few years, however, Schloesser once again acquired it, renting it out to others. By 1920, silent film star Sessue Hayakawa and his wfe, Tsuru Aoki, would own the property, entertaining movie industry society as well as fellow Japanese. After Hayakawa earned a large contract in Europe in 1923, Aoki put the home up for auction in December, with large ads in newspapers. In 1924, Robert Walter Douglas, who pretentiously called himself a “world-famous American baritone,” attempted to lease Glengarry. When he failed to make the first payment, real estate agents discovered he was actually “the Ponzi of Art,” creating elaborate schemes to finance a lavish lifestyle.

As with Glengarry, Schloesser and his wife entertained the community with all types of cultural performances and salons at Sans Souci, as well as allowing groups to hold meetings or conduct fundraisers. In 1916, they opened the home to artist Henry Lovins to hold gallery showings of his paintings of such locations as Arroyo Grande, Long Beach, Yamashiro, Glengarry, and Sans Souci itself. For a time, Schloesser himself would operate an art gallery out of the Castle. As with Glengarry, Sans Souci filled tourist guidebooks like California Motor Guide and Gazetteer and California and Californians, called one of Hollywood’s greatest attractions.

Charlie Chaplin and Marie Dressler in a scene from “Tillie’s Punctured Romance,” filmed at San Souci.

Recognizing Sans Souci’s uniqueness, Schloesser permitted movie companies over the years to rent it out for filmmaking. Marie Dressler, Charlie Chaplin, and Mabel Normand appeared on its grounds for the filming of Mack Sennett’s “Tillie’s Punctured Romance” in 1914, with comedian Billie Ritchie causing a ruckus at a social event on the estate for the 1915 short “Almost a Scandal.” Renowned director Lois Weber directed her epic “Dumb Girl of Portici” starring dancer Anna Pavlova on the grounds in 1916, using San Souci as a stand-in for ancient Italy. In 1925, the Hal Roach Our Gang short “Mary, Queen of Tots” featured the mansion as the home of star Mary Kornman.

After World War I started in 1914, the Schloessers even organized fundraisers for German widows and orphans and other European countries, before throwing massive rallies and fundraisers for the Allied effort after the United States entered the war in 1917. Not until April 12, 1918, however, would Schloesser and his wife petition Los Angeles’ Superior Court asking for a name change because of their “hatred for all things Prussian,” noting they were both American born, strong flag wavers, and war supporters. They asked to change their last name to Castle, the English translation of Schloesser.

Over the next decade, Schloesser moved in and out of a variety of careers, selling real estate, running a medical practice for glandular therapy out of the home, and even continuing the art gallery. He put Sans Souci up for auction with furnishings in 1921, but it failed to sell.

Expensive to maintain, the resourceful Schloesser recognized the value of the property on which his mansion stood. Demolishing his own lavish estate, the real estate magnate pulled permits in 1928 to construct a 7-story, 156-room apartment building costing $265,000, naming it the Castle Argyle Arms in homage to the glorious castle. Not long after, newspaper stories reported that Schloesser intended to build another elaborate castle with sixteen rooms near Castle Argyle to be called Falconhurst Castle, but these plans failed to materialize.

Though Sans Souci survived less than 20 years, Glengarry stood until the 1960s, when it too was demolished for other structures. Built originally as models of conspicuous consumption, these magnificent residences came to reflect the over-the-top glamour and inventiveness of Hollywood, dreamy escapes from the dreary, drama-filled world around them. Sans Souci and Glengarry set in motion Hollywood’s creation of magical netherworlds, Brigadoon-like visions arising from the misty earth, as well as celebrity over-the-top McMansions, caricatures of style fashioned out of huge amounts of money.