Note: This is an encore post from 2015.
In the early days of the motion picture industry, no rules and regulations held down the field’s growth and development as companies basically made it up as they went along. There were no labor rules, no production blueprints, no permits required for much of anything. This free form independence allowed filmmakers the opportunity to let their imaginations go wild on story ideas, sets, even film locations. With small crews, a film company could easily sneak shots at virtually any public location without notifying police or gaining anyone’s permission.

This guerrilla style of filmmaking is obvious in primitive cinema, where dogs standing on the sidewalk run into the scene, or crowds can be glimpsed watching the filming or even joining right in. Moviemakers basically shot wherever they wanted, as many owners of possible locations just wanted to see stars or a film being made, and required no payment. Others were given cameos, and some possibly earned a fee for allowing filming, there is no historic paperwork to explain.

Shooting at a lavish estate, on the other hand, required either making connections to an owner, or actually knowing them, meaning that few mansions were employed as locations in the first couple of decades. By the early 1920s, however, the Assistance League of Los Angeles created their own Film Location Bureau that licensed filming at exclusive sites while raising money for charity. The first of its kind, this organization allowed wealthy and important homeowners to rent out their property for filming while sometimes remaining anonymous and gaining money for their favorite charities.

Multiple stories over the years about the Assistance League’s Film Location Bureau claimed that Cecil B. DeMille was instrumental in the creation of the league through his enthusiasm at filming on the Hancock Banning estate down near Wilmington, but the dates and mathematics for his supposed involvement didn’t add up and lacked important details. The actual founding of the bureau appears to have taken place in 1921, as the August 23, 1921, Exhibitors Herald stated that Robert E. Wells, manager of the Bureau, reported that over $10,000 had been donated by the motion picture industry to charity in the last six months for the use of exclusive estates. The July 21, 1921, Los Angeles Times stated that Wells had formerly served as the manager of the Victory and later the Mission Theatres. The May 2, 1933 New York Times itself claimed the organization began in 1917. 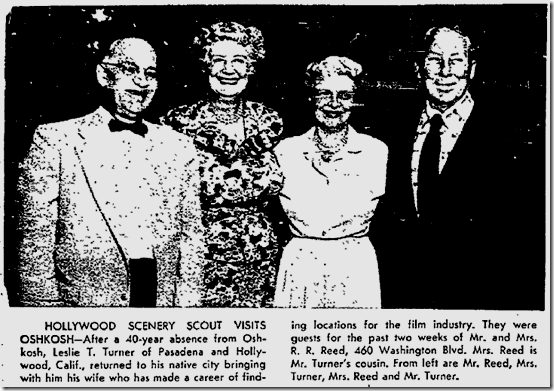 As Motion Picture magazine reported in a May 1925 issue, “A group of society women and social workers in California have an organization called ‘The Assistance League.’ For its charities, it raises funds by renting its houses to the movies. When they want a rich-looking house, the movies have only to telephone the League and explain whether they are looking for an imitation Fifth Avenue, a Long Island estate, an English country house, or a hacienda of California of the days before the Gringos came.” Fees of $150 a day were charged, with half going to the Assistance League and half to a charity of the owner’s choosing.

As an example, Motion Picture News stated in the July 2, 1923 issue that shooting of scenes for the Warner Bros. film, “Little Johnny Jones” occurred in and around the home of Los Angeles Times publisher Harry Chandler, arranged with Warner Bros. donated money to the Assistance League of Los Angeles to benefit charities.

The June 11, 1926, Los Angeles Times reported that the group raised almost $14,000 in 1925, with other charities receiving over $5,500 and the Assistance League themselves netting more than $8,200. The Assistance League’s own newsletter, California Southland, revealed in 1926 that the organization grossed $21,340, netting $13,425 for themselves and from the work of their Location Bureau. Some of the homes employed belonged to members of the group, while others came from friends and neighbors of these society women.

It was not until September 1927 that the motion picture industry itself formed a Location Managers Association per the September 22, 1927, Hollywood Vagabond, in order to share information on locations between member studio and production companies. The group also acted as a conduit between property owners and studio production teams.

The Assistance League’s Film Location Bureau suffered when sound came in, losing a large part of their revenue stream and studios began filming on stages where they could control the heavy cameras and equipment needed to record sound. As the December 1, 1929 Los Angeles Times stated, the boycott and restriction of actual location shooting ceased with the timing of “In Old Arizona,” and studios once again began visiting mansions for regular filming. Sound did force tough restrictions on shooting near airplanes, railroad tracks, tension wires, and major traffic locations, and the like, with production more difficult as crews expanded to more than four times the size of early film crews. As the leader said, “When sound came in, we had to revise our lest. We couldn’t use homes near trolley lines, airports, or streets.” Within a few months, the Assistance League began booking their exclusive list of properties once again, with new locations being added every year.

In 1923, a new leader for the group took charge, Mrs. Lee Wray Turner, a graduate of Harvard Law School with a master’s degree from Columbia. The mother of three children, she met with studio executives to discuss needed locations, discovered and selected them, took directors and crew members to visit these possible sets, created an iron tight contract, and then supervised filming. She called herself “the happiest woman in the world” for handling these location duties for the charity.

Mrs. Turner described her work for the Assistance League to newspapers, as reported in the Bluefield Daily Telegraph May 5, 1935, “We always prepare a contract which absolutely protects the owner against any damages and permits him to specify any charity as recipient of the fee paid by the studio. In this way we have obtained many locations which otherwise would be barred from motion pictures.” She also stated, “I would have a much wider variety of places to choose from if it weren’t for the palm trees. We can’t have palms in a setting that is supposed to be New York, Virginia, England, or France.”

As she also told the February 17, 1951, Toledo Blade, “I can draw a contract even movie lawyers can’t find a loophole in.” This contract protected the homeowner from possible destruction, set ground rules, and established payment. In effect, Turner worked as a buffer between owners and the motion picture industry, working to ensure that filming proceeded smoothly for all involved.

As the September 27,1936, Buffalo Courier Express wrote about Mrs. Turner, “She has to have the wisdom of Solomon, the patience of Job and the iron hand of Ivan the Terrible.” Her steely demeanor ensured that crews towed the line on film sets, as she arrived before anyone else each day, and was the last to leave after establishing that everything had been returned to proper order and nothing was damaged or destroyed. Studio personnel described how no one would even throw down a cigarette butt whenever she was around. 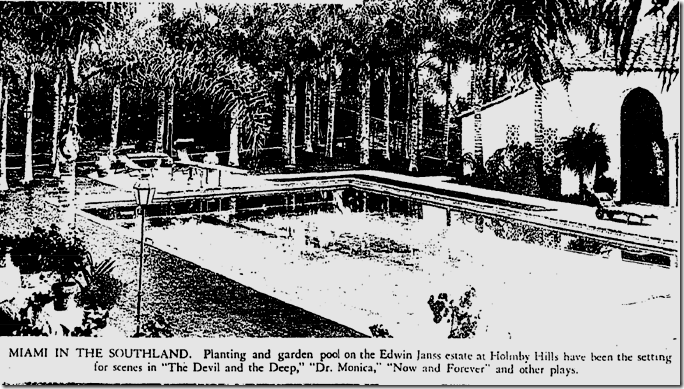 As she told papers, “It has proved a good way to share Southern California’s wonders with the rest of the world.” Mrs. Turner also revealed that her hardest job was convincing an owner of a San Marino estate to allow a helicopter to land on the front lawn for the filming of “It Happened One Night.”

Mrs. Lee Wray Turner created her own photo library of locations, growing from around 3,000 to almost 10,000 images by the late 1930s, which she allowed studio location scouts to examine to choose possible filming sites. She then talked with owners, showed directors and crew members around the property, wrote contracts, provided insurance policies, served as go-between, kept extras out of homes, and saw that immediate repairs took place to any damage.

Revenues began dropping in the late 1940s for several reasons. Many property owners began subdividing large estates in order to pay taxes, while others were destroyed to make room for freeways or other developments. Studios began filming overseas to take advantage of monies raised from foreign exhibition which was forbidden from leaving those countries and helped alleviate tax issues for film conglomerates. Mrs. Turner told the Salt Lake City Tribune on January 2, 1949, “We don’t see why they go overseas. I can duplicate any foreign spot right here.” Around this time, her daughter, Marcia Smith, began assisting her mother in finding and arranging locations for the Bureau.

In 1955, Mrs. Turner left the Assistance League to become Executive Director of the California Arboretum Foundation, which she led until 1960. She arranged filming here just as she had for the Assistance League. On November 27, 1970, Mrs. Lee Wray Turner passed away, and she was laid to rest at Forest Lawn Glendale.

In 1970, Mrs. Smith began operating her own film location bureau out of her own home, per an ad in the Pasadena Star-News February 24, 1970, following in her mother’s footsteps.

By the time Mrs. Turner moved on to the Arboretum, Los Angeles and other cities had established their own departments for booking shooting at various public sites around the city, as well as establishing the use of permits to film on public streets and other locations. The motion picture industry’s use of location managers escalated, and organizations like Film LA would be formed to assist with location shooting as well.

The Assistance League of Los Angeles innovated the practice of obtaining luxurious estates and ranches for motion picture filming, which now is virtually a necessity for many of these sites to pay bills and maintain the property. Much research still awaits on the history of location filming, and how and when the use of permits was actually established.