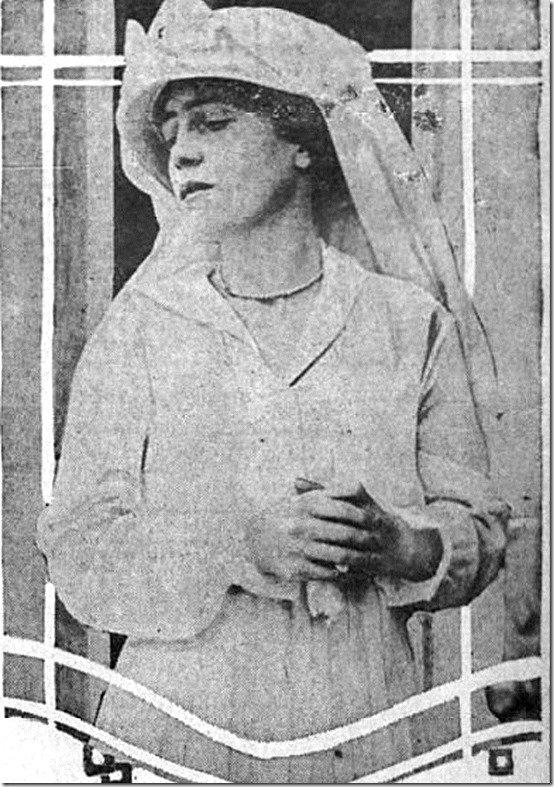 In the early 1900s, most women in the United States lacked the right to vote. Groups such as the National American Woman Suffrage Association organized to actively campaign for enfranchisement. Winning the vote would lead to other reforms regarding child rearing, property ownership, fiduciary matters, and most importantly, independence. Women could gain control of their lives and bodies, following their own dreams and career paths, moving beyond roles of mother, wife, teacher, shop clerk or secretary.

Motion pictures aided their mission, making films about the suffrage movement before producing films featuring strong and independent women, particularly in such serials as “Perils of Pauline,” “The Exploits of Elaine,” and “The Adventures of Kathlyn.” Heroines in these films confronted dastardly villains, wild animals, and dangerous adventures, investigating and solving crimes and mysteries.

Some assertive women, like Marie E. (M.E.) Firman, blazed new trails in daring professions like detective work, displaying intelligence and skills equal to any man. While little is known of Firman, she gained fame as Los Angeles’ most famous female detective in the 1910s and 1920s seeking clews, solving crimes, and running her own firm.

Born March 19, 1882, in Floyd County, Iowa, Firman imagined a much more exciting life for herself than small-town farm girl. She did at first marry Frank Solomon Ebert on February 27, 1900, giving birth to son Ray in 1904. Tired of married life, she deserted the marriage and moved to Denver looking for adventure. She divorced her husband in October 1910, and her parents won full custody of Ray. Two months later, she married Otho C. Firman in South Dakota. The determined woman ended up in Los Angeles by the mid-1900s, working as a detective under both the names Marie E. Firman and M.E. Firman, appealing to both men and women.

Newspaper ads beginning in late 1915 noted her professional status through being licensed and bonded, and handling “civil, criminal, industrial,” as well as shadowing and testifying in court. She played it both ways, leading ads with the phrase “Lady Detective” but employing the professional name M.E. Firman. At this time, she worked alone, headquartered in the American Bank Building at 2nd and Spring Streets.

Word of her outstanding work spread quickly. In late August 1916, ads proclaim multiple employees. That October, Firman took out a large ad noting that she was the only licensed and bonded lady detective in Los Angeles, with her own office and employees, including department store dicks capturing petty thieves. A large staff permitted evening and Sunday open hours to gain more clientele. Firman hired her husband, Otho, and his half brother Charles D. French as staff detectives to assist with the busy work load. City directory listings show Otho working as a conductor for Pacific Electric a few years before joining his wife’s firm.

In June 1917, Otho helped bring to justice the hit-and-run killer of George C. Quick, who ended up buried in Los Angeles’ potter’s field under the name Charles Johnson. The offending driver hit Quick with his racing car and sped away, but witnesses saw him and the car.

A month later, however, 36-year-old Otho would be slain attempting to catch a straying husband in the act. Broker William H. Cole shot and killed Otho and wounded French after being trailed on July 15 to 1122 Georgia St., the apartment of Eva Chapman, his stenographer of three years. Cole fled to his own home, scantily clad. Cole’s wife, suspicious of infidelity, employed the firm to gain evidence. Cole shot at Otho and French and fled, with the wounded men following and joined by Firman, Mrs. French, and Mrs. Cole. Otho dropped to the sidewalk outside, dying on the way to the hospital.

The coroner’s jury exonerated Cole after only 20 minutes’ deliberation, claiming that he acted in self-defense. A despondent Firman testified, dressed all in white with a veil trailing from her straw hat to her waist. As the Los Angeles Times reported, “Her hands twitched constantly and she appeared to be in imminent danger of fainting during most of the ordeal of giving, as far as she knew, the details of the tragedy which made her a widow.” Devastated, Firman never remarried, dedicating herself to her work.

Firman continued her work of 12 years, supervising employees but also taking an active part in large cases leading to major jury trials and publicity. Her firm hunted out clues in the defense of Arthur C. Burch, charged with murdering J. Belton Kennedy in 1921. Firman would find herself reprimanded by the judge in the case that December, when she attempted to signal her mother, testifying as to how she checked into a hotel shadowing Burch’s meeting with Kennedy.

In 1922, Firman cooperated with the Pinkerton Agency on a case of money belonging to Yokohama Specie Bank stolen from the Farmers and Merchants National Bank by employees. Her firm spent more than a year tracking down stockbroker and investor Herbert Ross, accused of forging checks at Citizens Trust and Savings Bank, before nabbing him in Chicago in 1923. Her firm captured extortionists attempting to defraud Los Angeles’ businesses in 1925.

Firman’s respected work led groups outside Los Angeles to hire her, including the San Diego grand jury. In 1926, Firman and 20 operatives spent five full months investigating graft, crime, and vice under the direction of Deputy District Attorney Richard Kittrelle, appointed by state Attorney General Webb to replace District Attorney Kempley, deemed “unqualified” to handle the case. The August 24, 1926, Los Angeles Times called her “a quiet, neat little woman, soft-spoken and mild in appearance but a human dynamo in action,” recognized as “one of the most well-known and best-experienced women detectives in California… .”

Firman’s prowess impressed her fellow colleagues as well, who acknowledged her experience and dedication. In 1927, Firman’s fellow detectives elected her to the California Association of Detective Agencies, Inc., acknowledging her as the “oldest licensed woman operative among the state’s sleuths…” per the Sacramento Bee. In 1931, the organization elected her to the membership committee.

The early 1930s brought tragedy to Firman. Her father died in 1931, followed by her son Ray in 1935 and then her mother in 1937. At that point, Firman’s trail grows cold. Los Angeles city directory listings for her detective agency appear in the early 1930s, but no 1930 or 1940 census records can be found. No further newspaper accounts of investigative exploits appear either. She eventually retired to Minnesota, where her parents had been raised, dying May 23, 1960, in Hennepin County.

Ambitious and determined, M.E. Firman created and operated a successful detective agency, solving crimes and gaining fame. This lady detective demonstrated the drive, intelligence, and strength of women in the mid-1910s, leading the way to more opportunities for women.