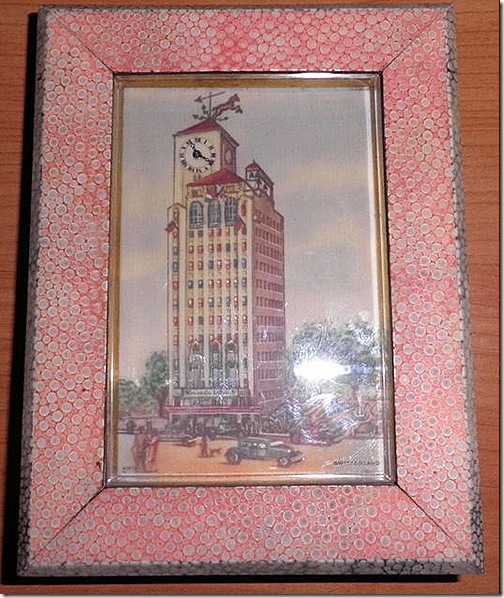 Thanks to the motion picture industry here in Los Angeles, fine haberdashers and designers have sold elegant, tailored clothing to the rich and famous, while also existing in stylish surroundings themselves. Bullock’s Wilshire is one such establishment, Adrian’s another. Alexander and Oviatt, a fine men’s haberdasher in downtown Los Angeles, constructed a beautiful Art Deco sales room in the late 1920s, one which exists to this day.

James Oviatt helped found Alexander and Oviatt in 1912, to provide fine tailored clothing and furnishings for a male clientele. Located in downtown Los Angeles at Hill and Sixth Streets, the firm offered elegant, European cuts and styles, discovered during Oviatt’s travels overseas to offices in London, Paris, Berlin, and Vienna.

In early January 1923, Oviatt announced the pending construction of a twelve story office building on Olive Street that would house the haberdashery as well as office space for other businesses. The new edifice would cost approximately $750,000 on land rented for 99 years at a cost of $2 million, and be designed by Walker and Eisen, top architects in Los Angeles. As the January 14, 1923, Los Angeles Times described it, “The building, designed by Walker and Eisen, is to be class A, reinforced concrete construction, and will be finished in pressed brick, terra cotta trimmed…Alexander and Oviatt will occupy the basement, the first, second, and third floors of the structure. The remainder of the building, consisting of lofts, is to be rented to high-class specialty shops.”

The basement space would contain golf and sporting goods, with a practice golf course. The haberdashery and hats would occupy the first floor, the second housing the suit and overcoat departments, and the third would contain women’s sports clothes. A factory making pajamas, underwear, lounging robes, and shirts would exist on the fourth floor. Unfortunately, finances would prevent construction for five years.

In that time, they renovated the Sixth and Hill street location to resemble a Jacobean estate, with Oriental carpets, rich draperies, exclusive fitting rooms, mezzanines, hallways, and balconies.

On March 12, 1927, Alexander & Oviatt announced that they would soon begin construction on a thirteen story office building at 615-17-19 Olive Street, to cost approximately $1,050,000, with excavation already completed for some time. Per the Los Angeles Times article on that day, they paid $75,000 for a half-interested in the alley which would separate their building from the Sun Finance Building.

Over the next couple of months, as construction slowly began, Oviatt gained space in The Los Angeles Times to display the current style of men’s hats, as well as to display and describe the correct clothing for various professions. As the April 27, 1927, Los Angeles Times reported, “Every profession, he believes, calls for a definite style of attire. For instance, doctors should wear clothes which are in harmony with their calling; lawyers will – or, at least, should – wear the cloth of the bar, while newspaper reporters are expected to wear anatomical scenery which will silently proclaim their vocation to the world.” His description of the reporter’s duds: “Large Glen Urquhart plaid suit, purple hue; dark wine shirt with collar to match; pink necktie with pink carnation in buttonhole; white socks, black pumps, white gloves, straight handle Malacca cane with hand-carved ivory ball top and concealed compass attachment; vest pocket camera, small magnifying glass and telescope; pearly derby hat with black band and white binding. Very light tan coat with large purple plaid, suitable for wet or dry weather.”

The August 7, 1927, Los Angeles Times reported on construction progress, with Edwards Brothers completing foundation excavation, with concrete to be poured in the next few days, with subcontractor Thomas Haverty Company stating that they hoped to complete construction in record time. Interior designers Fell & Paradise were creating an elegant Art Deco design, per Oviatt’s instructions, after he had toured the 1925 Paris Decorative Arts Exhibition. The December 4, 1927, Los Angeles Times displayed the imposing elevation, along with a long story about its stylish interior.

Style permeated the building with no expense spared; French marble imported from Europe filled the space, with a green slate roof similar to those of Europe, door numbers were silver metal bordered in crimson enamel, all plumbing fixtures would be a tan shade to match the French marble and dark woodwork, all door top panels would be of amber cathedral glass, all hardware would be a new white metal called “Mallechort” or “Melchoir”, “commingling of copper, zinc and nickel and is both beautiful and durable,” per the December 4 Times. All the furniture, windows, carpets drapes, fixtures, etc. were being constructed in Paris and shipped to Los Angeles. The crowning jewel of the whole building was the first creation and installation of Lalique glass outside of Europe. As the paper described it, “Lalique has designed and built for the James Oviatt Building the entrance doors, elevator doors for both store and building, art glass windows throughout the building and the ceiling, which is exceptional in every way. Most of these creations now are on exhibit in the semiannual French art exhibition in the Grande Palais in Paris. The building crest, used on many of the doors and elsewhere, will be two angels, representing Los Angeles, the city of the angels, ringing chime-bells, the idea being to combine the old world with the city of Los Angeles.”

The building finally opened on May 15, 1928, and was widely hailed in The Times. “Something entirely different – a dream come true in architecture, in art, in decorative features has been embodied in this new building and in its series of shops.” They went on to describe how the lighting behind the Lalique glass seemed to resemble a rainbow.  All of this beauty seemed natural to Oviatt, as he told the paper, “Art is not a thing, but a way – a beautiful way.”  He was described as trying to instill ideals and artistic inspiration into business.

Two years later, Oviatt opened his own luxurious penthouse atop the building, one which included a pool with sand imported from France, a tennis court, gardens, Turkish bath, steam-room, and a practice golf links.  As with the store, rare foreign woods were imported along with furniture and light fixtures including more Lalique glass.  The apartment contained ten rooms filled with beautiful Art Deco furnishings, including a living room, guest room, dining room, reading room, dressing room, and master bedroom.

The Depression greatly impacted the firm, leading to unique ways to drum up business.  Per the November 12, 1930, Daily Variety, Alexander and Oviatt employed Nat Deverich, a former studio executive to coordinate three day visits to all the studios, where they modeled clothes for stars and executives as well as fitted them for new outfits.  They also offered deep discounts on their merchandise for the first time, with a June 23, 1932, Los Angeles Times article mentioning, “Lowered prices to meet lessened incomes” as one of their new slogans, as many of their patrons were now just having old clothes mended and altered without buying new wardrobes.  By 1933, they were reducing expenses while maintaining the same full staff and exquisite quality of clothes.  A couple of months later Oviatt was able to announce that all creditors had been paid in full, and that he was back in possession of the building.  By 1935, the firm completely remodeled the third floor for a made-to-order business. 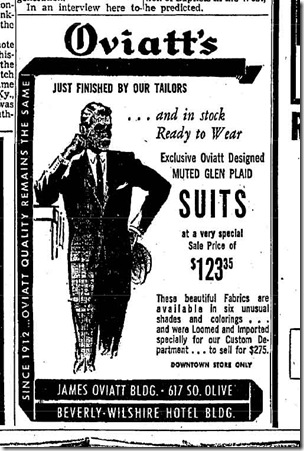 Tenants in the building also enabled Oviatt to pay the bills.  Businesses such as electrolysis, beauty salons, and an employment agency for white collar workers operated at the Olive Street locations, as did the Music Corporation of America or MCA, a Chicago based music talent agency, which opened its LA office on half of a floor in the Oviatt building in 1931, per Variety.

By 1935, Oviatt’s was enough again in the chips that the firm sponsored a radio show called “Broadway Bill” with Edward Williams, which revealed gossip from Santa Anita racetrack and ran Monday through Saturday at 6:30 PM on KFAC.  As the December 25, 1935, Daily Variety reported, “It’s a hotter subject than studio shop talk and those who know their Hollywood know what that means.  Oviatt’s, class men’s shop, advertises the broadcast as a sporting gesture for lovers of horses.”

As the decades went on, Oviatt seemed to become increasingly conservative, to the point of alarm.  He wrote editorials to the paper denouncing the government’s financial policies, and became an ardent John Bircher.  He even rented space in the building to the Christian Defense League, which the attorney general’s report in 1965 called a para-military organization.

Jean Duardin and Berenice Bejo in a scene from “The Artist” filmed at the Cicada Club.

In the 1980s, the first floor became the elegant Rex Il Ristorante, one of the top drawer restaurants in Los Angeles, after developer Wayne Ratkovich completely restored the building in 1980.  Cicada moved in in the late 1990s, and chef Stephanie Taupin added gold leaf to the ceilings.  In the last ten years, Maxwell DeMille has taken over running Cicada, turning it into a swanky Dinner Club reminiscent of 1930s Hollywood.  Open Thursday through Saturday for dinner, on Sunday nights it becomes the Cicada Club, featuring a pricey prix fixe dinner and live music by some of Los Angeles top performers of 1920s-1950s music.  Patrons observe a strict dress code, with many wearing vintage clothes and dancing to their favorite performers.  For those who can’t make it live, DeMille streams the show live over the Internet.

In another unique bid to gain clientele and remain part of the chi-chi set, Oviatt’s opened an art gallery run by Ernst v. Harringa in 1937, which displayed old masters for sale during its first showing.

For those who have seen the Academy Award winning film, “The Artist,” Cicada is featured in a scene where Peppy is interviewed over the radio.  In the film, she comes down the stairs from the bar and the restrooms, not from the real entrance on the same floor.  One can catch a glimpse of the glory days of old Hollywood in that lovely scene.

I am retired from the Los Angeles Times
View all posts by lmharnisch →
This entry was posted in Architecture, Found on EBay, Hollywood Heights, Mary Mallory and tagged #Cicada Club, #Oviatt's #"The Artist". Bookmark the permalink.