Screenplay by Edwin Justus Mayer, adapted by Bruno Frank from a play (“Czarina”) by Lajos Biro and Melchoir Lengyel.

“A Royal Scandal” is available on DVD from TCM.

Latest Lubitsch production one of the most enjoyable films of the season.

“A Royal Scandal” is entertainment with a continental flavor that will delight audiences everywhere. All signs point to a rousing success for the production, which has been handsomely mounted, crisply produced by Ernst Lubitsch, intelligently directed by Otto Preminger and acted spiritedly by a fine cast of players.

Grand fun all the way through, the film has been done in typical Lubitsch manner with tongue in cheek and with a display of humor that has a strong appeal to the adult mind. Audiences will laugh often and loud.

For audiences fond of sophisticated characters giving rapid-fire utterance to sparkling dialog, this Ernst Lubitsch production will give satisfaction. If your clientele has seen — and liked — Tallulah Bankhead on the stage or screen, this sumptuously mounted, made to order vehicle for her undeniable talents will prove a crowd-pleaser. The picture drags slightly toward the end. The story deals with Catherine the Great of Russian’s dalliance with a personable young army officer whose fiancee, a lady-in-waiting to the Czarina, tries vainly to bring the lad back to his senses and her own embraces. No less amusing is the counterplot, wherein the wily chancellor outsmarts two cliques of double-crossing generals plotting to seize the throne. Otto Preminger skillfully directed a brilliant cast.

A mere incident in the flavorsome life of Catherine the Great has been blown up into a full-fledged movie. The result is a fluffy concoction, good to look at but not exactly satisfactory to a hungry man. The story lacks sufficient body and strength of plot to qualify as a picture of rounded maturity, but we dare anyone not to be amused at some of the risque lines.

Tallulah Bankhead is Catherine. Her lines under the Bankhead skill come to life. What’s more, she looks beautiful. Those years of stage trouping certainly serve her well in this tricky role of Catherine.

Bill Eythe plays the innocent victim of Bankhead’s charm. He looks and acts the part. Charles Coburn as the chancellor is up to every minute of palace intrigue, and Anne Baxter, who loves Eythe, has much too little to do, but does it well. But it’s Bankhead’s picture, made no mistake.

Bosley Crowther, writing in the New York Times (April 12, 1945),  did not approve of such goings on, saying “ ‘A Royal Scandal’ is an oddly dull and generally witless show.”

Looking at “A Royal Scandal” today, the material seems old and tired. The plot is one of those essentially boudoir comedies involving royalty and generals, with everybody in elaborate costumes, where there are lots of slamming doors, quick entrances and stealthy exits. The precision clockwork of the stage play (done on Broadway in 1922 with Basil Rathbone in a minor role) has become a creaky piece of machinery on the screen.

Something like a second rise of the Frohman Empire took place last evening within the walls of that theater, which was his joy and pride. The occasion was the long deferred first performance of that Hungarian comedy called “The Czarina,” which Lengyel and Biro wrote more than 10 years ago and which has waited all this time for just such a one as Doris Keane to come its way. It is a comedy of character, a play which uses facetious strokes of travesty to sketch for comprehending modern eyes a dramatic portrait of that shrewd and far-sighted but amorous ruler known to history as Catherine the Great.

It is an abundantly entertaining and sometimes uncommonly clever piece of dramatic writing which has been made happy by its meeting with Miss Keane. Hers is a brilliant performance. It is, to be sure, an uneven one. For instance, there is one scene of turmoil wherein a good many opportunities are forfeited through sundry misadventures and mismanagements but for the most part Miss Keane sails through triumphant, attaining every now and again a flash of such shining and perfect comedy as  makes you think of Mrs. Fiske in “Becky Sharp.”

So the essential plot dates from before World War I, when palace intrigue was much more timely than 1945 and the transformed political landscape at the end of World War II. Today, it might as well be the mythical kingdom of Ruritania or the mythical Vienna of student princes.

What’s missing most of all in “A Royal Scandal” is the Lubitsch touch – and there’s a reason. Lubitsch was on familiar ground, having made “Forbidden Paradise,” a silent version of the film, at Paramount in 1924, with Pola Negri, Adolphe Menjou and Rod La Rocque.

Twenty years later, the famed director, who would die in 1947, was recovering from an extended illness, according to the Los Angeles Times (April 19, 1944). To compensate, The Times Edwin Schallert said, Lubitsch was rehearsing “the master scenes each day” with Otto Preminger and the actors, and then Preminger took over during filming. Lubitsch and Preminger were both great directors, but with utterly different styles and it’s hard to imagine a more unpromising collaboration. As such, the acting seems forced at times. Since the libraries in Los Angeles are closed, I’m unable to check Preminger’s autobiography and Darryl F. Zanuck’s comments on the film (both of which I had for research on the making of “Laura”).  It gets just a few lines in Bankhead’s memoirs, mostly about how much she was paid ($125,000) and that how most of it went for taxes.

Then there’s the cast. The major problem is William Eythe as a very weak leading man. It’s clear that he is giving everything to this role, but he can’t pull it off. I’m not sure any actor could, given the situation, but he’s not leading man material. Then there’s Tallulah Bankhead – a lot of Tallulah Bankhead. I can’t say I have ever seen her in a starring role before and I think I know why. Much of the movie consists of long scenes between her and Eythe and although Bankhead had a reputation for a colorful love life, there is clearly zero chemistry between her and her co-star.

There is also a lot of Charles Coburn and it’s a pleasure to see him as something other than a gruff, grumpy grandpa.

Sig Ruman is Sig Ruman, but on steroids. He is the Sig Ruman of “A Night in Casablanca” rather than the Sig Ruman of “Ninotchka.” Then there’s Vincent Price, who gets very little screen time but seems totally out of his element. His attempt at a French accent is horrible. It is even worse than his fake Southern accent as Shelby Carpenter in “Laura.” Which is a sentence I thought I would never write.

And yet, “A Royal Scandal” is a pleasant diversion. It’s mildly amusing, and probably serves best as a case study of what doesn’t work.

Update: Here is the uncropped image of William Eythe and David Douglas. In the background are Michael Visaroff, left, and Friedrich von Ledebur.

For Monday, we have a mystery gent.  Our leading man has been cropped out due to insufficient mysteriousness and will appear Friday. The trade papers generally liked this week’s mystery movie, but our friend Bosley Crowther did not approve of such goings-on, which I think almost qualifies as a hint.

For Tuesday, we have this mystery gent.

Update: I have a Zoom appointment at 8:30, so this fellow’s identity must await further research. His character is named Colonel Garnov or Garnoff. And don’t Google him or you will end up on a disreputable website. 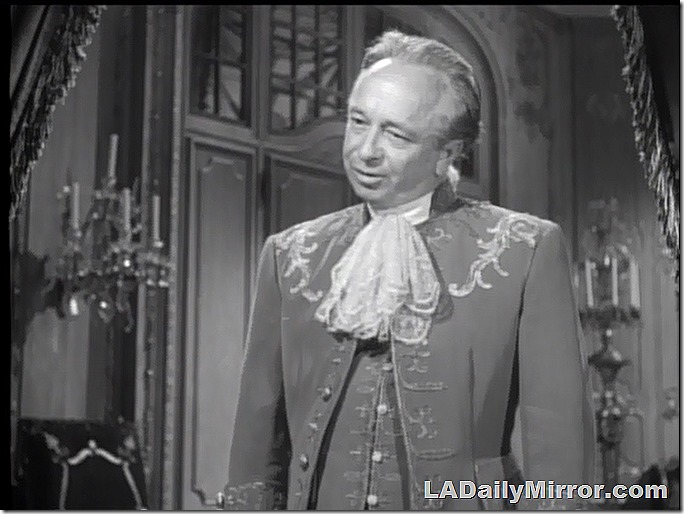 And also this mystery gent.

For “Hm Wednesday,” we have this bearded mystery gent.

Update: This is Sig Ruman.

And here we have another mystery gent.  Bonus points if you detect the theme I’ve got going from last week. 🙂

Update: This is Grady Sutton, with Ruman as BOTHG.

Update: This is Vincent Price and Charles Coburn.

For Friday, we have our mysterious second female lead.

Update: This is the barely seen Anne Baxter.

And here’s our mystery leading man and leading lady.

Update: This is William Eythe and Tallulah Bankhead. Chemistry is a thing they do not have. 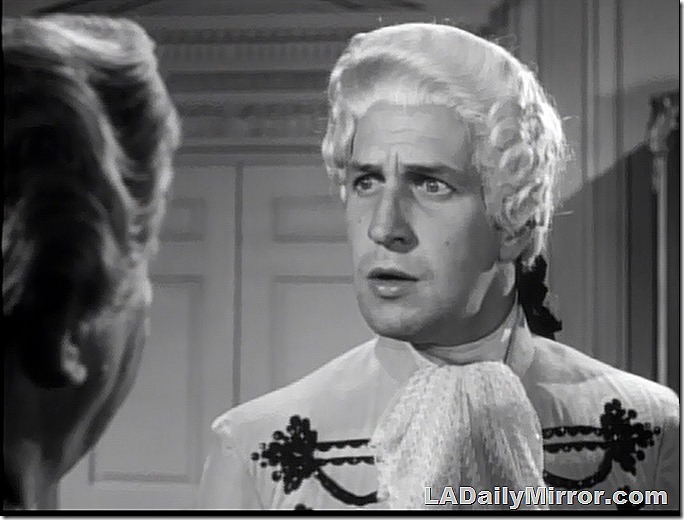 And here’s a bonus picture of Thursday’s non-mystery guest in his wig. His French accent is as bad as his Southern accent in that movie where he plays a Southern rogue.

Update: Vincent Price in what may be his most unlikely role.