“The Show of Shows” is available from Warner Archive.

I picked “The Show of Shows” based on this ad in Film Daily (Jan. 3, 1930). The movie was extremely popular and featured 77 (count ’em, 77) Warner Bros. stars. One of the numbers (not used as a mystery photo) was the inspiration for a studio publicity stunt: A bike race from Warner Bros. theater in Hollywood to the Warner theater in downtown Los Angeles, with Joe E. Brown giving the signal to start. Several entrants used the old-fashioned bikes of the era portrayed in the film, according to Film Daily.

“The Show of Shows,” supervised by Darryl Zanuck, was an extravaganza in sound and two-strip Technicolor sequences intended to showcase Warner Bros.’ stars in a long variety revue, more like a stage show than a film. “The Show of Shows” was supposed to launch “Lady Luck” as a hit tune and it’s heavily promoted, though “Singing in the Bathtub” or “You Were Meant for Me” are more familiar today.

The production was part of a larger Hollywood trend.  Motion Picture News (Oct. 5, 1929) said: “Hollywood has come to the sensible conclusion that revue in pictures, like revues on the stage, are naturals every year, always assuming that they are clever. Each of the major studios, therefore, may be expected to produce one big extravaganza affair annually from now on.” The article noted that Paramount was producing “Paramount on Parade,” Fox planned a “Movietone Follies of 1930” and “New Orleans Frolic” and that Pathe was also producing a revue.

The movie was criticized at the time for being long, with murky, unfocused, often “pastel” images, and too many dancing girls. And so it is today, although most of the Technicolor sequences were converted to black and white over the years, except for the Chinese number featuring Myrna Loy. The movie is stagey, sometimes uncomfortably so. “The Show of Shows” is more like a stage production that’s been filmed, rather than a movie. Big gestures, big voices, flat sets, the large dance numbers – it’s a stage show.

I skipped John Barrymore as a mystery guest because after several recent appearances I find him tiresome and very hammy. In a stern rebuke from the past, however, Mordaunt Hall of the New York Times (Nov. 21, 1929) singled out Barrymore’s performance as the best part of the film. And for 1929 audiences, it’s important to note that this was the first time many of them heard his voice:

Hall said: “Of all the footage of prismatic and black and white material in the Warner Bros. audible screen revue …the most compelling stretch is that given over to John Barrymore’s magnificent delivery of the Duke of Gloucester’s soliloquy in ‘Henry VI.’ It is a strange thing to sandwich in between comic utterances and hosts of female dancers, but it was thoroughly appreciated.”

It’s nice to see young Myrna Loy. But the choreography in the Chinese number (the only surviving two-strip Technicolor sequence) is very odd. I’m sure it was state of the art for 1929, but it seems quite eccentric today. Which brings us to the state of the print, at least as it aired on TCM. Contemporary reviews note that much of the film is unfocused, and time has not helped the problem.

“The Show of Shows” was popular with audiences – at least some of them. In New York, mounted police were sent to the Winter Garden theater to control crowds, as noted by Mordaunt Hall. In looking for reviews of the day, I see that Warner Bros. pulled its ads from the Baltimore Sun after the paper gave the movie a bad review. Some things never change, do they? The film was also censored in Canada over a joke about the Prince of Wales. No, really.

Beatrice Lillie sued Warner Bros. for $50,000, claiming that her reputation had been damaged by appearing in the film. She said she came to Hollywood for feature roles and all she got was two scenes in “The Show of Shows” lasting nine minutes and was paid $15,000. In addition, Film Daily Year Book reported that Lillie sued Warner Bros. because her contract specified that her specialty numbers could only be used in “The Show of Shows” and not be turned into a short (which Warners apparently did). The court ruled that the producer could do whatever it wanted with a picture it owned but that Lillie could bring action as a breach of contract.

And then there’s Frank Fay, who was married to Barbara Stanwyck from 1928 to 1935, and that’s all I’m going to say about that.

Writing in the New York Times, Mordaunt Hall said (Dec. 1, 1929): “Frank Fay does ingratiating work as the master of ceremonies. He is seen and heard more than any one else in the film and his recitation to a musical accompaniment is so good that on at least three occasions last week it met with hearty applause. He is never tedious and has a thoroughly agreeable personality that goes well with this picture.”

In contrast, M.W. Larmour, National Theatre, Graham, Texas, told Exhibitors Herald World (Aug. 2, 1930): If your crowd would enjoy a program of 20 or 30 Vitaphone acts, then buy this, for that is what it consists of. However, it does have a master of ceremonies between each act. He is billed as Frank Fay. About half of my crowd took the trouble to look me up and tell me that the picture would have been passable if he had been left out.  Meanwhile, Exhibitors Daily Review said that Frank Fay had planned to go back to vaudeville, but since appearing as master of ceremonies in the film, he was being viewed as a “sure-fire comedian.”

Before the screening of “The Show of Shows,” a vast throng was attracted like flies to the theater portals, chiefly through the glare of lights, and then the police in none-too-polite tones decided to clear the lobby, mounted men even going so far as to drive back the crowd by riding their horses onto the sidewalk. Persons who were waiting for friends who held their tickets were ordered away from the theater two and three times, which was naturally far from pleasant at an opening where the guests expected a dignified reception.

Notwithstanding, so soon as the screen started to deliver the first bars of melody of “The Show of Shows,” the ill humor of many subsided and they leaned back comfortably in their seats and forgot the police and the harsh treatment….

There is plenty to look at in “The Show of Shows,” but there are moments when the imposing hosts of dancing girls begin to pall. Not that the scenes are lacking in imagination, but it is like having too much of a good thing. The pastel shades are often charming, but there are times that some of the sequences are not in focus. Mr. Barrymore’s offering was not only superbly performed, but the Technicolor never failed in his part of the program. 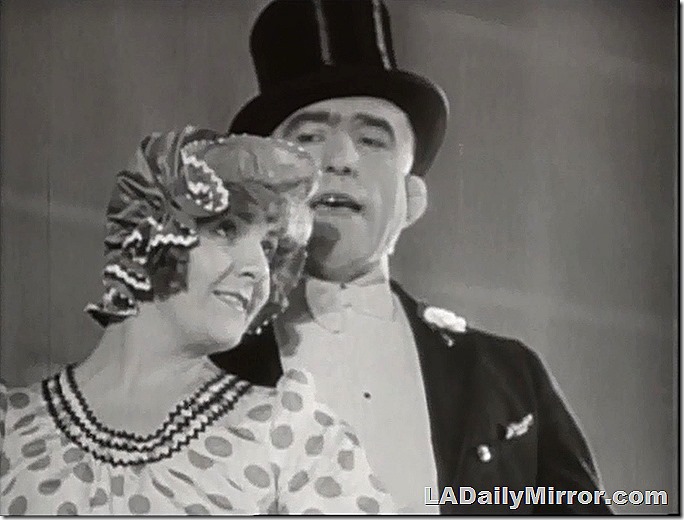 For Monday, we have a mystery couple.

Update: This is Winnie Lightner and Bull Montana.

For Tuesday, we have this mystery gent. And who’s in the background?

Update: This is Lloyd Hamilton.

It’s this mystery gent. And who’s in the background?

Update: This is Lupino Lane.

This mystery fellow…. and who’s in the background?

Update: This is Lee Moran.

This mystery fellow. And here’s where we stop.

Update: This is Heinie Conklin. 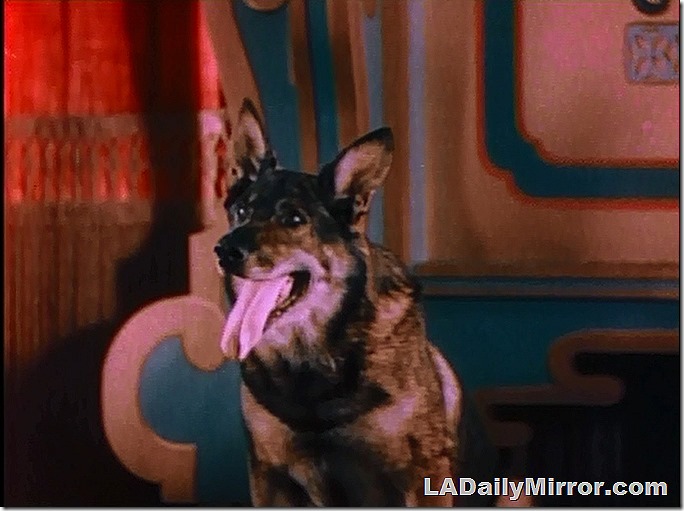 For “Hm Wednesday,” we have something of a rarity – a mystery dog.

Update: This is Rin Tin Tin.

Does that mean we have a color sequence with a German shepherd and a Chinese number? That’s what it means.

Update: This is Nick Lucas.

Yes, the image is fuzzy, but clear enough to make out our mystery guest in a tuxedo and top hat, holding a clarinet.

Update: This is Ted “Is Everybody Happy?” Lewis showing just how fuzzy some of the images are.

And finally, a mystery woman.

Update: This is Beatrice Little. She did not approve of such goings-on and sued Warner Bros. 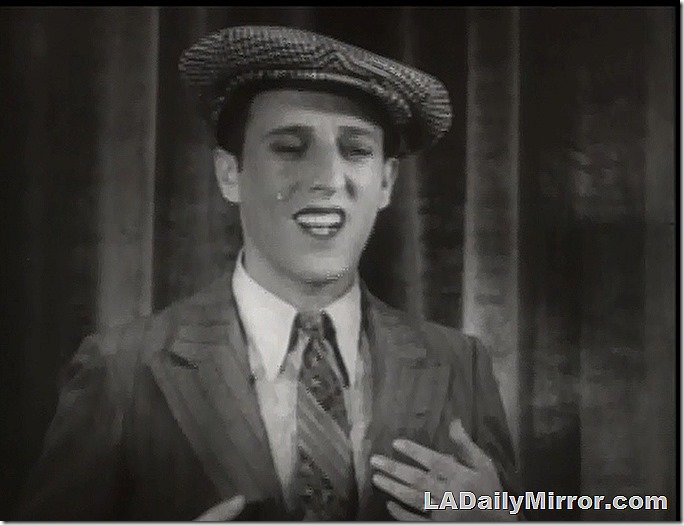 For “Aha Thursday,” we have a mystery gent in a newsboy cap. And no, he isn’t much of an “Aha.”

Update: This is Sid Silvers. 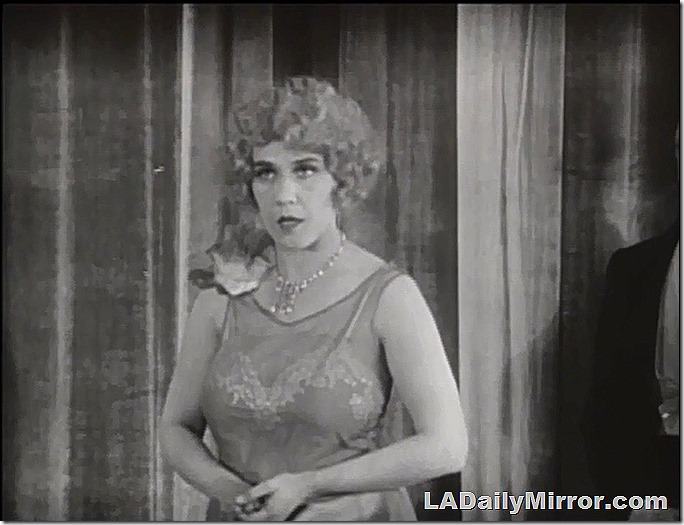 We also have this mystery woman who is a bit more of an “Aha.”

Update: This is Louise Fazenda.

Update: This is Frank Fay.

And finally, these rather unmysterious lads.

Update: This is Chester Morris and Jack Mulhall. 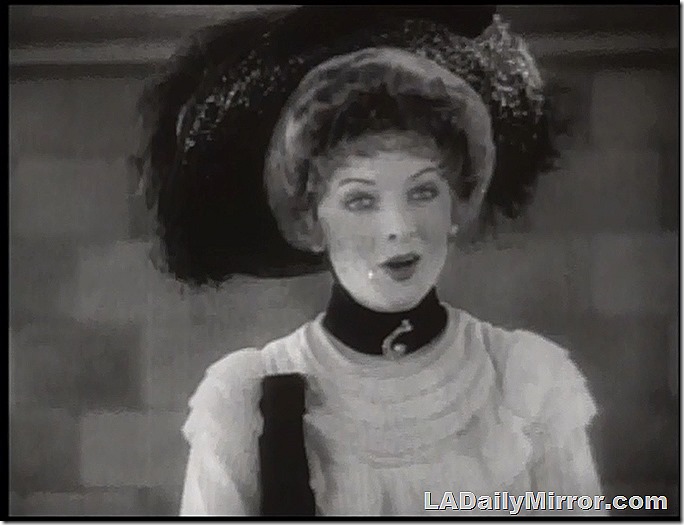 For Friday, we have a mysterious Floradora girl….

And in a more exotic setting….

I am retired from the Los Angeles Times
View all posts by lmharnisch →
This entry was posted in Film, Hollywood, Mystery Photo and tagged 1929, film, hollywood, mystery photo, The Show of Shows, Vitaphone, Warner Bros.. Bookmark the permalink.