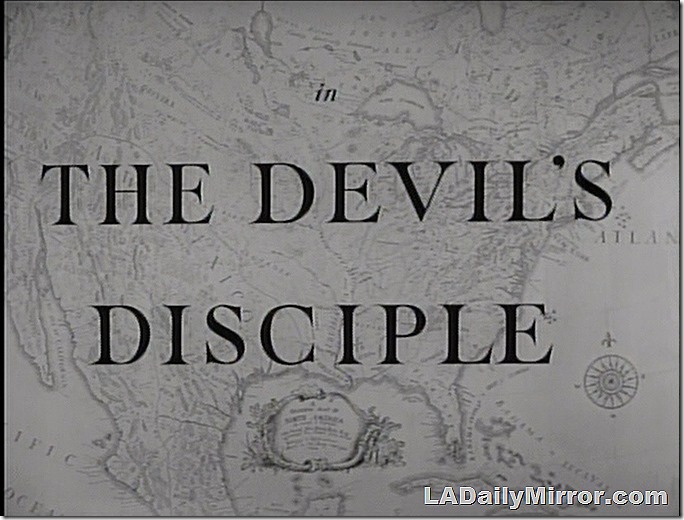 Screenplay by John Dighton and Roland Kibbee, based on the play by Bernard Shaw, by special arrangement with the estate of Gabriel Pascal.

This was an interesting discovery for me, selected because it was near a DVD I originally chose for the mystery movie but couldn’t find. Kirk Douglas is over the top as only Kirk Douglas can be. Laurence Olivier gets most of the best lines and delivers them acidic pungency. Alas, I’m not familiar with the original play so I’m unable to critique the adaptation by John Dighton (“Roman Holiday” and “Man in the White Suit”) and Roland Kibbee, who worked with Burt Lancaster on several films, including “The Crimson Pirate,” “Vera Cruz” and “Midnight Man.”

One of the oddest elements of the story is the love triangle between the Presbyterian minister (Lancaster), the family ne’er-do-well (Douglas) and the minister’s wife (Janette Scott). Her indecisiveness toward the two men in her life is certainly at odds with American portrayals of the Revolutionary War, a Shavian touch.

Hecht-Lancaster had been trying to make a film of “The Devil’s Disciple” since at least 1955, when Harold Hecht negotiated rights with the estate of Gabriel Pascal. Shaw (d. 1950) gave exclusive film rights to Pascal (d. 1954), who filmed “Androcles and the Lion,” “Antony and Cleopatra,” “Major Barbara” and “Pygmalion.”

Filming was delayed several times. The first delay was in 1956, when Lancaster signed on to “Gunfight at the O.K. Corral” and “The Rainmaker,” pushing the film to October.

The New York Times later reported that Hecht-Lancaster Productions planned five pictures for 1957, including “The Sweet Smell of Success” and “The Devil’s Disciple” with Olivier and Montgomery Clift. The New York Times reported in 1957 that Carroll Baker, recently seen in “Baby Doll,” would take the role of the wandering wife. Filming was scheduled for March 1957 in Northern California. You may recall that Clift was injured in a May 1956 car crash while filming “Raintree County,” delaying production for about two months.

In 1958, the New York Times said that the production had been postponed, with filming set for England and Douglas added to the cast, and Alexander Mackendrick to direct. Delays on “The Devil’s Disciple” gave Mackendrick his first U.S. picture with “The Sweet Smell of Success.” In June 1958, Hecht-Lancaster moved some of its operations to England, with filming on “The Devil’s Disciple” scheduled to begin July 15, 1958, with John Dighton making some final script revisions with Mackendrick.

But on Aug. 2, the New York Times reported that Mackendrick had been fired from the film over a “difference of opinion” and replaced by Guy Hamilton.

George Bernard Shaw, a vegetarian who managed to roar like a man-eating lion in print, would be surprised, it is fairly safe to state, at the film version of “The Devil’s Discple,” which was unveiled yesterday at both the Astor and Normandie Theatres. And it is likely, too, that aficionados of the master of Ayot’s plays would be a mite confused by this copiously edited and rewritten edition of his noted lampoon of American Revolutionary events and some Englishmen involved in losing a valuable colony.

As revealed now, “The Devil’s Disciple” is, somewhat disappointingly, less the biting satire of the stage and more an unevenly paced comedy-melodrama leaning heavily toward action. As such, “The Devil’s Disciple” moves along at a lively clip but Shaw’s meticulous development of character and a healthy portion of his gibes and barbs are merely shadowy effects here.

…. If the original play has been subject to revision, omission and invention, it must be reported that the humor and deliciously sardonic quality of General Burgoyne’s character, as portrayed by Sir Laurence, is effectively evident on screen. He is that practical and unperturbed wit who suavely explains to a dismayed and bumbling aide that  “some gentleman in London forgot to dispatch the orders. He was leaving town for his holiday. I understand. To avoid upsetting his arrangements, England will lose her colonies.” 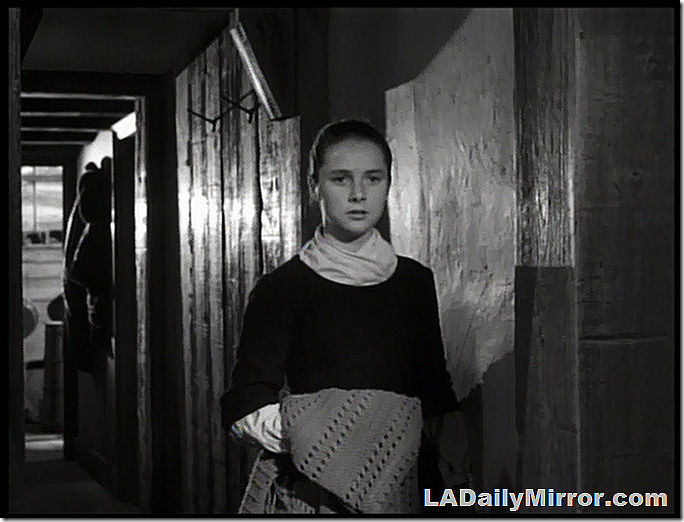 For Monday, we have a mystery actress.

Update: This is Jenny Jones. 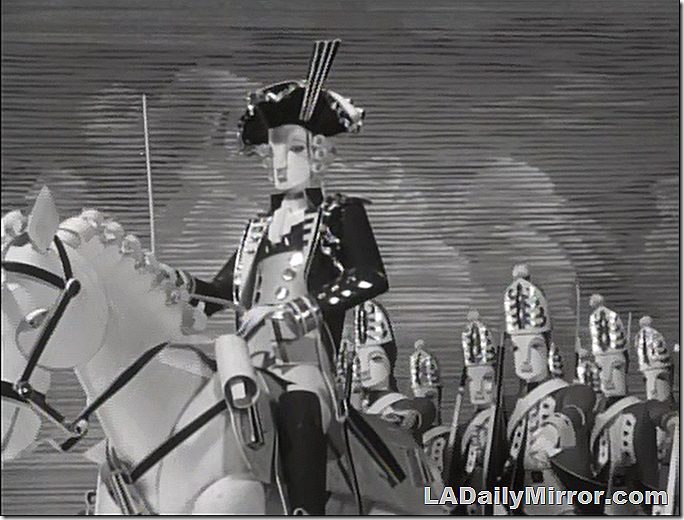 For Tuesday, a frame grab from one our mystery movie’s animated sequences. They are quite well done. And in a style that isn’t immediately recognizable. IMDB doesn’t credit an animator, so this is particularly mysterious.

I’m not able to find any information about these animations. Since the production was shot in England, I’m guess it was the animator was British. 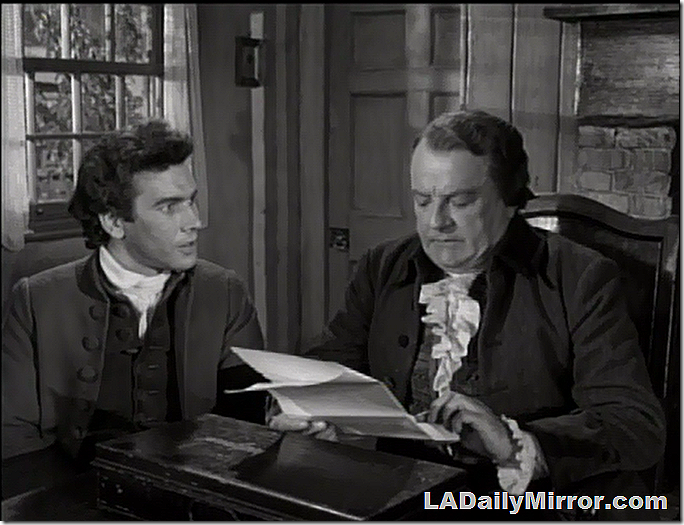 For Wednesday, we have two mystery gents.

Update: This is Neil McCallum and Basil Sydney. Alas, no one fell into my nicely placed Horst Buchholz trap. 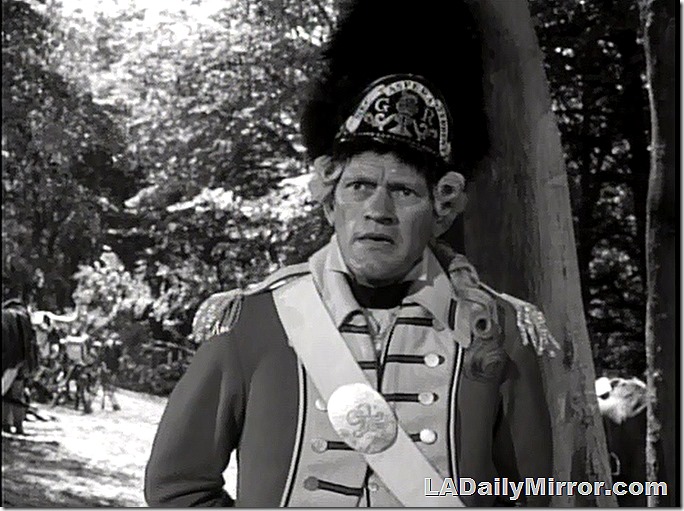 For “aha Thursday,” we have this mystery gent. He does not approve of such goings-on. Oh my, no.

Update: This is Harry Andrews. 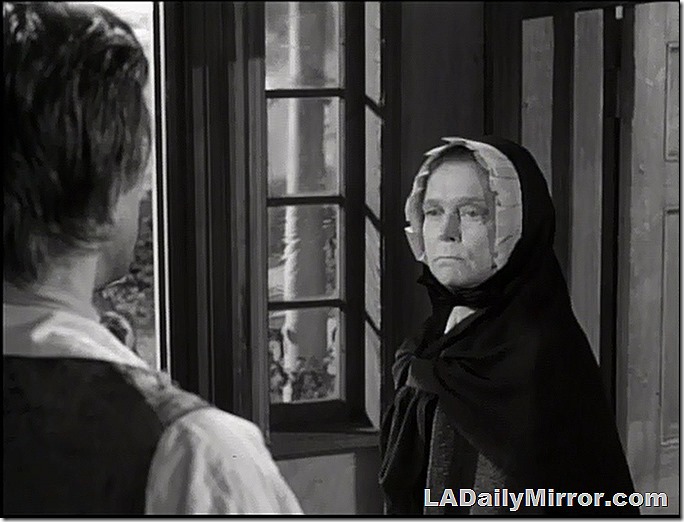 Update: This is Eva La Gallienne. 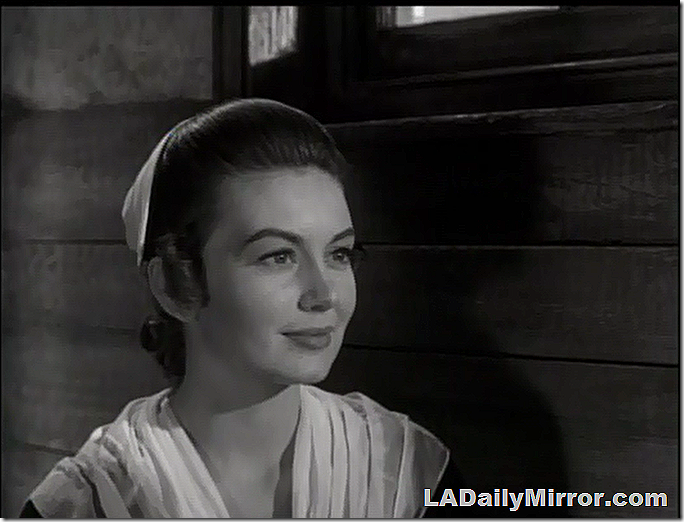 For Friday, we have a mystery woman …

Update: This is Janette Scott. 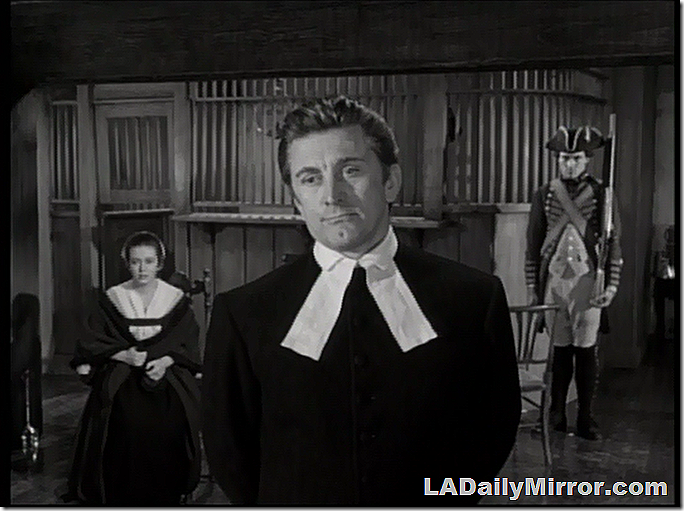 We also have this unmysterious parson… 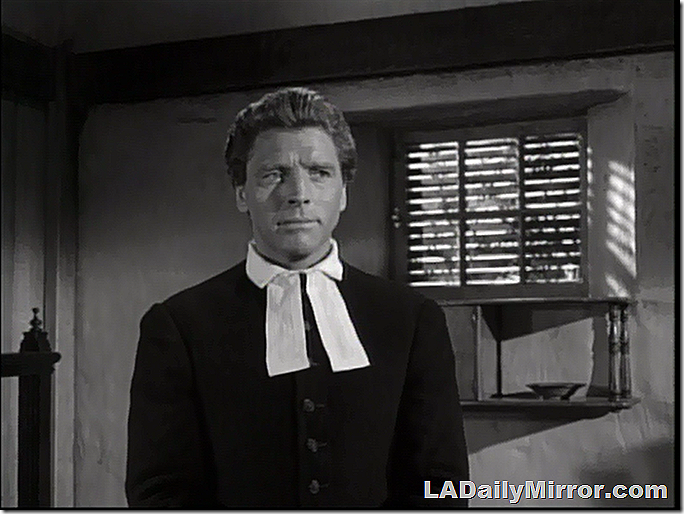 … And also this unmysterious parson…. 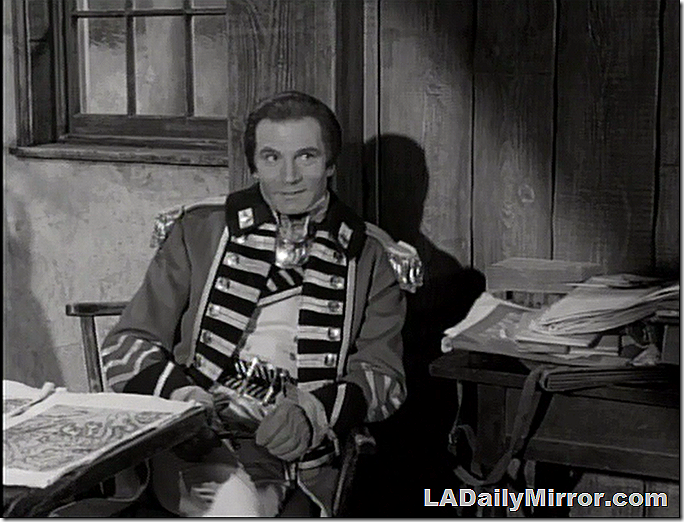 … And this unmysterious general, who gets most of the best lines.