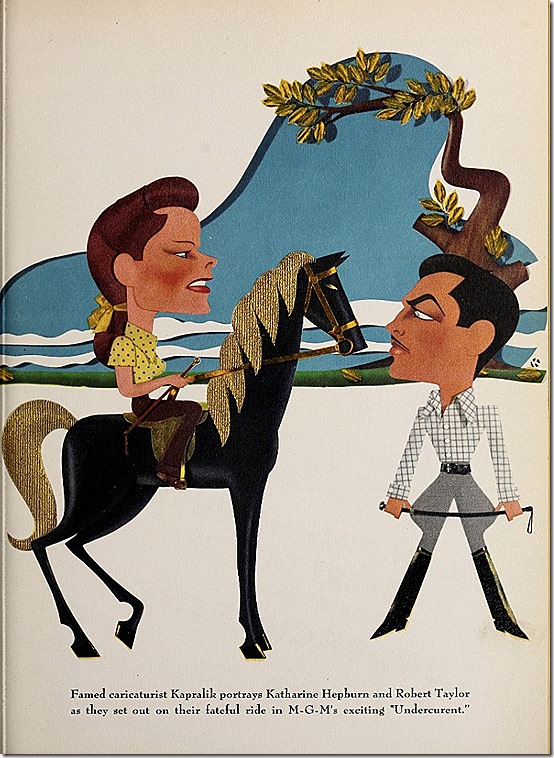 While most people don’t recognize the name Jacques Kapralik, they recognize his wonderful art. One of the premiere key art illustrators at Hollywood’s motion picture studios in the 1940s and 1950s, Kapralik could do more with line and paper than an architect with a ruler and a pen.

While little is know of the celebrated artist prior to his arrival in the United States, Kapralik was born October 29, 1906 in Bucharest, Romania. Newspaper sources list him as a painter before he immigrated to the United States to possibly escape Nazi persecution in Romania. Kapralik landed in upstate New York on August 1, 1936, at which date he petitioned to become a naturalized citizen of the country. 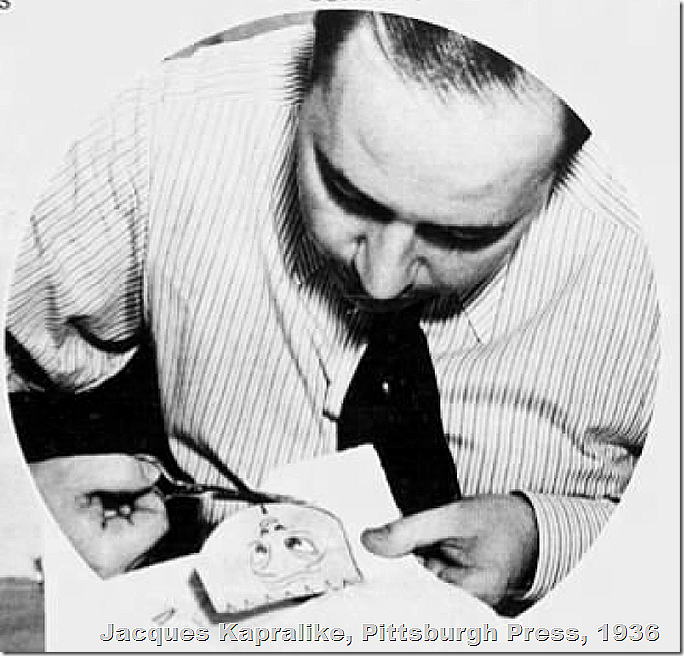 Thanks to his wonderful artistic skills, Kapralik landed work as an illustrator, drawing ads for New York’s Essex House in 1937, at which time he received citizenship in the United States. Kapralik also created illustrations that appeared in the “Annal of Advertising, Editorials, TV Art & Design” from 1938 through the 1940s, and drew caricatures for Stage Magazine in the late 1930s as well.

Kapralik earned his largest commission turning out caricatures for columnist Mark Hellinger’s syndicated entertainment column called “Goin’ to Town.” The column featured news squibs, gossip, and blind items on celebrities and Hollywood hangers-on. Kapralik illustrated the persons mentioned, along with the main theme of the column.

Variety reported on November 17, 1937, that his striking work compiling advertising backgrounds with paper cutouts that he then photographed in special shadow boxes attracted Twentieth Century-Fox, which hired him to create art titles for film backgrounds, titles, and campaign art in promoting motion pictures.

Kapralik’s work immediately appealed to audiences, and on February 5, 1939, the Pittsburgh Press Sun ran a feature on his work. The story, illustrated with photos, revealed the process in which he painstakingly created his paper masterpieces. He cut paper to form miniature dolls demonstrating the special personalities of the stars, adding props and other special decorations to add depth to the image. These elaborate pieces of art appeared almost 3D, bringing an immediacy to the work. After completing the little sets, they were shipped to New York and photographed in color, and then reproduced for publication. 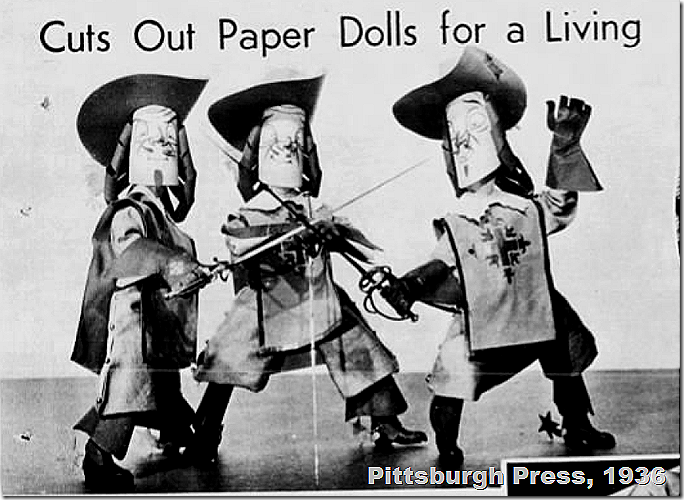 The San Bernardino Sun interviewed Kapralik for a May 5,1940 feature, with the artist describing how he developed the images of his portraits. The artist stated that caricaturists see the personality behind the face, “the expression of which is vital to success in pictures, the things that make a face remembered.” They look for the feature that “expresses his real character far better.” As Kapralik stated, “Eyes are the first thing we see,” followed by the mouth. He believed that it was “variation from rules that makes a face interesting, and a caricaturist pounces on the variations and exaggerates them…What we should look for is character, expression, not perfection of beauty. “

After working exclusively with Fox for a couple of years, Kapralik appears to have freelanced with other studios as well, creating artwork not only for Fox, but also such heavy weights as Paramount, MGM beginning in 1941, Universal, and United Artists. He also found time to design book illustrations.

The 1940 census revealed that Kapralik and his wife resided at 8439 Sunset Blvd. No. 403, where they lived for the rest of his life. He had attended four years of college, and made over $5,000 a year. Kapralik eventually joined the Los Angeles Art Directors Club, even organizing some of their local exhibitions and competitions by the late 1940s.

Entertainment trades reported Kapralik’s work on various features, with the Motion Picture Herald noting in 1943 that his “brain children” so attracted the interest of readers that many employed his ads in magazines as wall decoration. The artist’s work appeared not only in movie magazines, posters, and lobby cards, but also occasionally decorated sheet music as well.

By the late 1940s, Kapralik created caricatures and art for William Randolph Hearst’s New York Journal American and later designed many elaborate paper cutouts for the Sunday Pictorial Review magazine. Walter Winchell described Kapralik’s art for the Journal American as “perfume for the eyes” in a 1949 column.

Over the years, Kapralik created his special paper collages for such films as “Hit the Deck,” “Susan and God,” “Silk Stockings,” “Salome,” “The Caine Mutiny,” “The Bad and the Beautiful,” “The Viking, “The Bridge Over the River Kwai,” “Love in the Afternoon,” “Designing Women,” “Mogambo,” “Bonjour Tristesse,” “The Robe,” “Executive Suite,” Julius Caears,” “Anatomy of a Murder,” “Pal Joey,” “Solomon and Sheba,” and “The Seventh Voyage of Sinbad.”

In the late 1950s, Kapralik designed art for King Features Syndicate occasionally as well.The artist adapted his work somewhat when he created ads for “Mr. Magoo” in the 1950s. Kapralik worked right up until his death on November 28, 1960. Unfortunately I have found no obituaries for the artist to reveal further details of his life and work.

While his name is virtually unknown today, Jacques Kapralik’s beautiful work is adored by scores of movie lovers for its vivid, eye-catching portrayals of beloved stars and films.