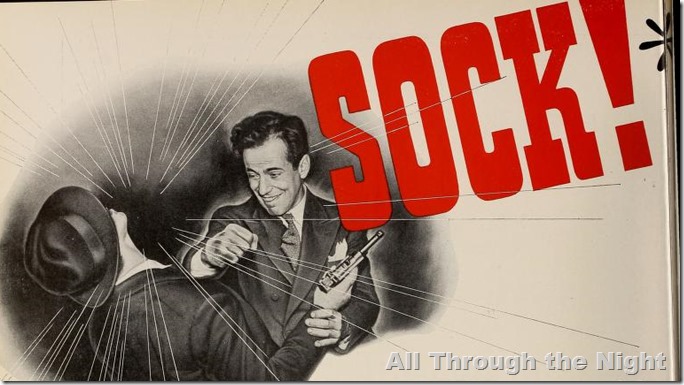 Humphrey Bogart in a Warner Bros. ad for “All Through the Night.”

TCM threw a wild party for its 25th Anniversary on air and 10 years of honoring classic films with its just concluded TCM Classic Film Festival, a packed four days of classic films, social activity and special events for cineastes and fans alike. With an eclectic blend of movies, it offered a little something for everyone, a crowd- pleaser to the nth degree.

Depending on the selection of films to watch, the festival-going experience offered divergent emotions and points of view, thereby fulfilling every taste. Though I chose to attend only 1920s through 1940s films, I ended up walking on the dark side of life, where movies produced decades ago dramatically confronted issues and subjects as timely today as when they first raised their ugly heads, showing the dramatic impact of popular culture and entertainment to open minds and thoughts. 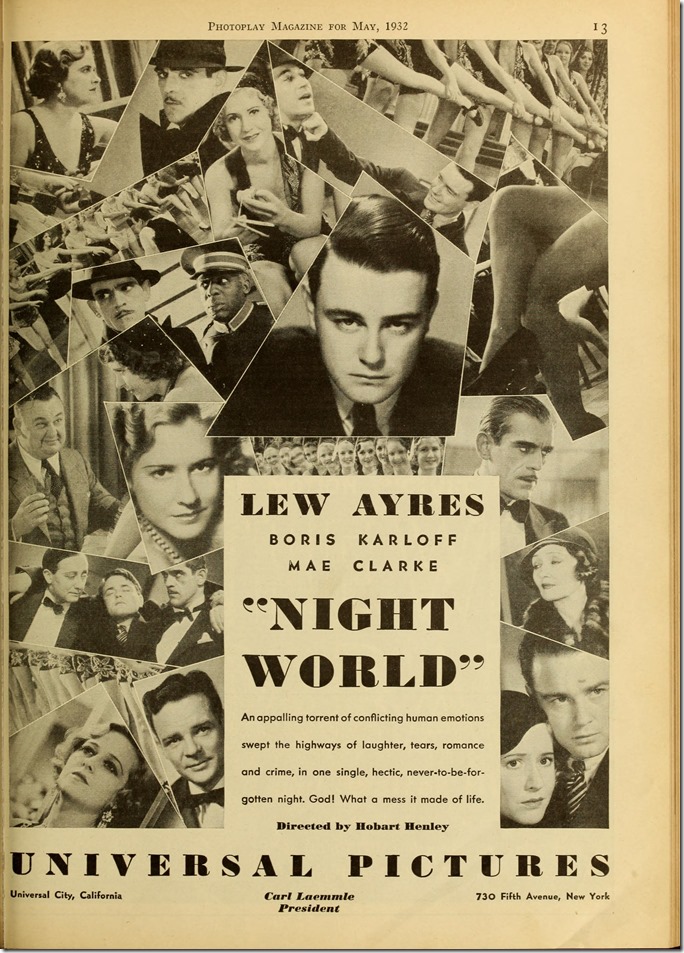 I kicked off the festival Thursday night by seeing the 1932 Universal film “Night World,” featuring a post-Frankenstein Boris Karloff as gangster Happy who isn’t too elated to find his wife fooling around with choreographer Russell Hopton, while showgirl Mae Clarke rescues a dissipated Lew Ayres from drowning his sorrows in alcohol and outbursts. The film possessed Pre-Code touches like a prostitute before and after a pickup,a lisping man propositioning anything in pants, showgirls in various stages of undress, open drinking, and a few risque lines, but it was the camerawork that stole the show.

Surreal double exposures and dissolves reflected the hustle bustle and chaos of Broadway, Times Square, and swanky nightclub shows. Karloff menaces as a gangster and not as a monster, happily chewing the scenery. Ayres shows the promise still to come, and Clarence Muse earns attention for his role as a doorman who brings humanity to the double dealings of most of those around him. George Raft oozes slick attitude as a wily gangster. Hedda Hopper plays a small role as Ayres’ bitter, angry mother, while a young Jack La Rue is already stereotyped as a trigger-happy gangster. Busby Berkeley provides some showgirl hot stuff pre-Warner Bros. with some overhead patterns, high kicks, and a tracking shot through lovely gams in “Who’s Your Little Who-zis?” 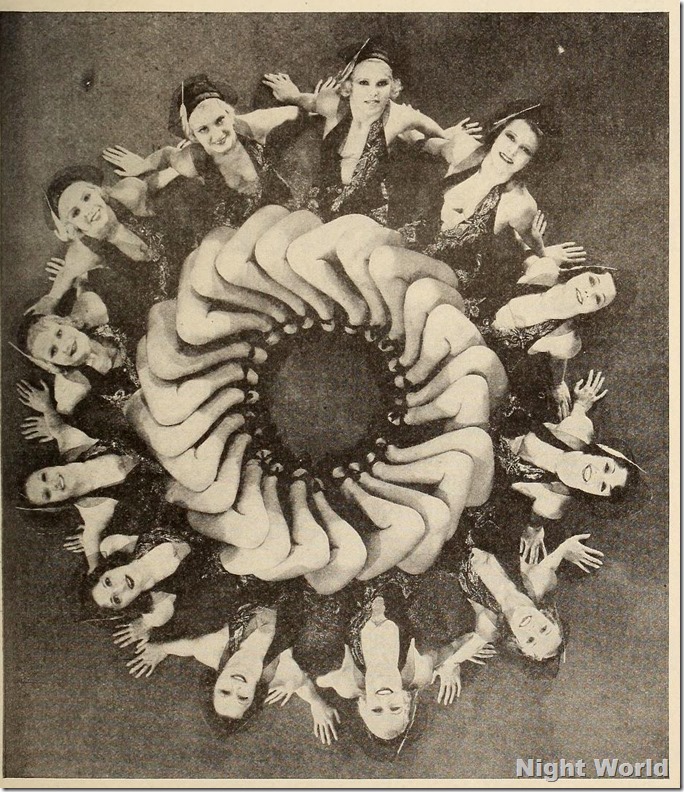 Work prevented me from seeing much on Friday. “Vanity Street,” another 1932 Pre-Code, this time from Columbia, featured Charles Bickford and Helen Chandler in a story of getting by and finding true love. In the depths of the Depression, a desperate and unemployed Chandler throws a brick through a drugstore window to be arrested and gain a place to eat and sleep. Compassionate cop Bickford allows her to live at his place to get back on her feet rather than sending to her jail, and she gradually falls for the kind if distant policeman. Pre-Code elements involve Bickford asking Chandler whether she had problems with a boyfriend or girlfriend, an unmarried yet platonic couple living together, and the faded musical star Mayo Methot wearing very tight, sheer, lowcut evening gowns. George Meeker and Raymond Hatton play their normal weasely villain roles to perfection. Lovely stock footage of Times Square and the Great White Way provide striking atmosphere for the backstage story, with nice camerawork and Chandler’s vulnerable performance stealing the show.

While a bare-bones programmer, the 1948 “Open Secret” featured topical story matter and beautiful chiaroscuro lighting to reveal lingering prejudice against foreigners by nationalist malcontents, for whom they place all blame for their failures. To paraphrase John Ireland’s Paul Lester character, they act this way because they’re stupid, vicious, or just do what they’re told. He reiterates that they attack and blame people of color or different religions for their problems because of their own lack of intelligence, ambition, drive, and character. When the main villain is finally caught, Sheldon Leonard’s Detective Malconetti states, “He was playing Hitler in the wrong neighborhood.” The villains, among them usually pleasing performers like Tommy Noonan, Roman Bohnen, and Arthur O’Connell, hide in the shadows and seams of the expressive lighting, just like those who hide behind screen names on the internet. Producer Harry Brandt produced the film in order to get meaty issues in front of audiences, something to entertain as well as provoke deep thought.

Saturday morning, I kicked off my day by seeing the entertaining Humphrey Bogart 1942 dramedy “All Through the Night,” with a timely look at Fifth Columnists and Nazis attempting to take over the United States group by group and disaster by disaster through subterfuge, disinformation and violence. A wisecracking Michael Schlesinger introduced the film, calling it the comic prequel to “Casablanca” because of similar quips, plot points and characters. Filled with such recognizable character actors as Frank McHugh, Jane Darwell, Sam McDaniel, William Demarest, Jackie Gleason and Phil Silvers, the movie also features Judith Anderson as a haughty auction house employee, Peter Lorre as an oily, not to be trusted pianist and Conrad Veidt, a more suave if less sinister Nazi than Major Strasser in “Casablanca.”

The festival honored Twentieth Century Fox at the newly restored American Legion Post 43 and its deluxe film theatre with the program “Fox: An Appreciation.” Archivist Shawn Belston presented clips from Fox’s vast vault highlighting some of the iconic films the archive had restored and preserved, among them “How Green Is My Valley,” “Gentleman Prefer Blondes,” “Star Wars,” “Alien,” “Big,” “Planet of the Apes,” “The French Connection,” “Leave Her to Heaven,” “Titanic” and “The Sound of Music.”

Fox cowboy superstar Tom Mix received his due with an entertaining double feature screening of “The Great K and A Train Robbery” (1926) and “Outlaws of Red River” (1927). Filmed in the stunning Royal Gorge, Colorado, “The Great K and A Train Robbery” showcased Mix and intelligent horse Tony smartly overpowering a gang of western train robbers while also lassoing the heart of the railroad baron’s lovely daughter. Mix’s thrilling action stunts showcased his physical prowess while Tony received his due in rescuing Tom from a variety of scrapes. Renowned musician Ben Model provided rousing accompaniment on a Wurlitzer organ bringing the oater to life. I unfortunately missed the bottom half of the double feature in order to make the next screening.

The dynamic, outre “Blood Money” (1933) failed to pass the Production Code in 1934, which banned it from further screenings, and it was easy to see why. Usual prim and proper Frances Dee walked on the wild side as a masochistic nymphomaniac kleptomaniac looking for trouble in more ways than one, falling for George Bancroft’s ballsy bail bondsman with a finger in every pie. Hawaiian hula dancers perform semi-nude, and Blossom Seeley gets a chance to strut her stuff. At the conclusion, Dee’s uninhibited character grabs a newspaper from a woman physically attacked by a potential employer to meet the man herself. The film even copies “Sherlock Jr.’s” exploding billiard ball idea.Such supporting stalwarts as Judith Anderson, Teresa Harris, Henry Kolker, James Burke, Bradley Page, and a young blonde Lucille Ball make appearances, as does downtown Los Angeles in a car chase.

The National Recovery Act gets plenty of publicity, with the real NRA posters hanging on several walls stating “We do our part.” Bancroft’s bail bondsman pockets plenty of his clients’ assets, taking deeds, bank accounts, and property illegally to pull strings around town. He also gets one of the best lines, applicable then as now: “The only difference between a liberal and a conservative man, is, that a liberal recognizes the existence of vice and controls it, while a conservative just turns his back and pretends it doesn’t exist.” 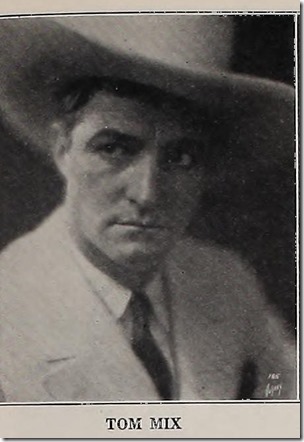 In Club TCM, Alexa Foreman and Lynn Zook’s film “Thank You, Turner Classic Movies” screened that night, a sweet valentine to TCM thanking it for presenting classic movies and thorough enjoyment for 25 years. Several classic film fans, including me, offered their praise and admiration to a channel which brings them deep pleasure and comfort.

Sunday afternoon I enjoyed a packed screening of the 1928 silent Garbo-Gilbert “A Woman of Affairs” to honor film historian nonpareil Kevin Brownlow. After the screening of a short film recognizing Brownlow’s outstanding work as the second honoree of the Robert Osborne Award, renowned historian Leonard Maltin interviewed Brownlow. Esteemed composer Carl Davis conducted the TCM Film Orchestra playing his original score for the tragic romance, adapted from the notorious novel “The Green Hat.” Davis’ score, adapted from Franz Liszt’s works, was beautiful but too arch at times for the tragic story.

While the festival features entertaining movies and the chance to meet old and new friends alike, attendees are sometimes squished like sardines as they queue up for numbers in waiting lines, reminiscent of waiting patiently in Soviet bread lines. Meals become rushed in order to grab that number for entrance into the next film, where introductions and interviews are often kept to a bare minimum.

For those who love celebrities though, the festival offers the opportunity to see stars up close, even to grab a photograph or autograph easily. Screenings take place in two of the most important and iconic theatres in Hollywood, if not the United States, offering the chance to see movies in the same theatres where cinematic superstars have watched their own films.

I salute TCM and Turner for developing a channel devoted to classic American film which is now celebrating its 25th year in business, and for creating a film festival 10 years ago to celebrate these films on the big screen with like-minded friends.