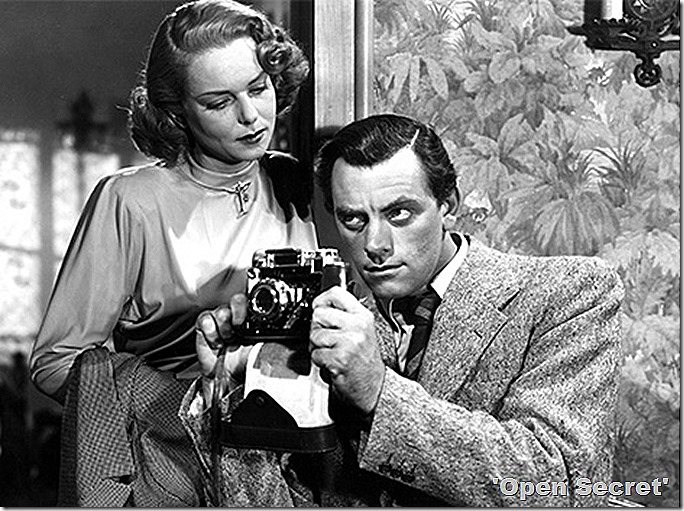 TCM tackles a vital subject with its screening of the motion picture “Open Secret” during the upcoming TCM Classic Film Festival April 11-14. 2019. As timely now as when it was first released in 1948,“Open Secret” promotes religious and racial tolerance to a country fighting to accept the very principles upon which it was created. Produced on a much smaller budget than studio films “Crossfire” and “Gentlemen’s Agreement,” “Open Secret” takes a no-nonsense look at growing racial intolerance and anti-Semitism in the late 1940s, fighting back against these loathsome tendencies.

Two years after the United States and its allies crushed the Axis powers of Germany, Italy, and Japan to win World War II and restore dramatic principles of equality and tolerance, fear and hatred of foreigners and “others” was growing among the disenchanted in America. The July 17, 1946, Los Angeles Times reported that the Jewish Labor Committee was beginning a campaign to “eliminate racial discrimination and bigotry among workers.” “It takes a concerted campaign against the conditions which tempt ordinary people to grasp at the dangerous belief that it is the Jews, or the Negroes, or the foreigners who are taking away their economic bread and butter or cultural opportunities. Most antagonism arises from economic insecurity which pits man against his fellow man for jobs, better living standards and social advancement.” The Committee hoped to show that it was economic and political practices which were causing these cuts in wages, not the people.

Harry Brandt, who was head of the Independent Motion Picture Owners Association, had criticized many of the earlier 1947 films as lousy and empty, became chairman of the board of Marathon Pictures to make pictures on serious issues. He told Los Angeles Times critic Edwin Schallert that he intended their film “Open Secret” to be hard hitting and pull no punches, because “the American public needs films of this type,” from Schallert’s August 7, 1947, column in the Times.

Brandt, who had been active in supporting Jewish causes and other social concerns, joined with Arthur L. Mayer, a veteran New York exhibitor and distributor to form the corporation based in Hollywood, and inked a four picture releasing deal with Producers Releasing Corporation. Frank Satenstein was named president, with Peter Mayer handling direction, Max Wilk in charge of the story department, and Robert Joseph associate producer.

Marathon intended to make a film called “Pride of New York” based on the life of New York’s mayor William O’Dwyer as its first feature, but purchased screen rights to Wilk’s and Ted Murkland’s story “Death Watch” instead. The August 9, 1947, Boxoffice reported, “From it they will make their initial film to be called “Open Secret” and dealing with Fascism in America.” Screenwriter Henry Blankfort worked with Wilk to adapt the story for the screen.

The production quickly came together, with John Ireland hired as star on August 12, and the rest of the cast, including Sheldon Leonard, Roman Bohnen, and Arthur O’Connell, soon thereafter. Production began August 19 and was completed by September 19, 1947, under the direction of John Reinhardt.

Reinhardt’s background made him an appropriate choice for headlining the picture. Born in Vienna, Austria in 1905, the former engineering student turned actor immigrated to America in 1922 and worked as an actor, art director, and writer before directing Spanish language features for Fox and later Paramount. At the beginning of World War II he made films for Mexico’s War Effort before joining United States Counter-Intelligence. He had just completed “High Tide” and “The Guilty” for Jack Wrather Productions before starting on “Open Secret.”

In the story, two newlyweds, Paul and Nancy Lester (John Ireland and Jane Randolph) find themselves drawn into a threatening situation after they go to visit a friend and find him missing, slowly uncovering evidence of a gang of bullies terrorizing a neighborhood to chase away unwanted neighbors.

The studio rushed to finish post production and release the film to ride the wave of films discussing religious and racial tolerance in various stages of production, including “Gentleman’s Agreement” which was filming, and “Crossfire,” released in August 1947. “Crossfire” had substituted anti-Semitism for homophobia as its theme in order to find acceptance from the Production Code Administration.

“Open Secret” opened at New York’s Gothan Theatre on Broadway January 16, 1948, for a quick run before its general release on May 5, 1948, two months after “Gentleman’s Agreement” opened in theatres. It received a mixed reaction from critics, perhaps because of its smaller budget, lack of big stars, and production values. Most all praised its lighting and many enjoyed its acting.

An “Open Secret” lobby card listed for sale on EBay at $15.

Several found it thoughtful and important, but considered it too sensationalistic. One review stated, “The subject of anti-Semitism, so effectively handled in “Crossfire” and “Gentleman’s Agreement,” doesn’t fare so well here…smacks too much of dime-novel sensationalism.” Motion Picture Daily stated that it “tells the story with burning sincerity and with considerable forcefulness and conviction.” Harrison’s Reports thought it would do average business since it possessed no big stars but did handle a controversial subject without pulling punches. “There are times when the proceedings strike an unbelievable note, particularly in its depiction of violence, but on the whole the story is well developed and puts over the message in a forceful way.”

The Independent Exhibitors Film Bulletin loved it. They declared, “It blasts away at prejudice against any group and lashes out at Fascism’s greatest ally, the street corner rabble rouser and his cohorts who incite racial hatred for their own personal gain.”

Ireland himself was happy to be star in a film with a meaty story. The Brooklyn Daily Eagle stated in their January 11, 1948 issue that he turned down two other roles in order to star in the film because of his idealism. “For year I’ve waited for a character to play in a picture that has something important to say. I hadn’t run more than two or three pages of the script when I knew this was it. Here was a story dealing with the most vital menace in our country, and it pulled no punches…We’ve recently had two powerful movies that dealt with the same subject, but as good as they were, they lacked scope. They only attacked small sections of the problem. The first one portrayed racial intolerance as it affects the upper-brackets. The other one, while hitting at bigotry in general, confined itself to anti-Semitism. It never once mentioned the widespread and deplorable prejudice against the Negroes.

“Open Secret” pulls no punches and it doesn’t – to scramble metaphors – aim at a small target. It blasts away with both barrels at all of us – you, me, everybody. It says things that must be said.”

Sadly, “Open Secret” seems more needed now than ever because of growing hatred against ethnic groups and the rise of white nationalism around the country in the last few years. It calls for all of us to remember the principles about which this country was founded and to defend them at all costs.

I am retired from the Los Angeles Times
View all posts by lmharnisch →
This entry was posted in Uncategorized. Bookmark the permalink.