Gentlemen, Your Wedding Photos Are Ready After 62 Years

Can you identify any of these men?

In 1957, film with these images was left to be developed at a photo shop at Broad Street and Allegheny Avenue in North Philadelphia. According to Philadelphia Gay News, the shop manager had a policy of not returning photos to customers if he found the content objectionable, as he apparently did with these pictures of a gay wedding.

Rather than destroying the photos, however, he allowed store employees to have the unreturned  pictures and these images were saved by a woman who worked in the shop. The woman’s daughter, Jackie Madarang, found the pictures many years later and sold them on EBay, but donated copies to the ONE National Gay & Lesbian Archives.

The photos show a gathering of neatly dressed men apparently in their 20s and 30s, a man officiating for the ceremony, an exchange of rings, cutting a cake, opening presents and dancing. The photos have been published several times, but no one has succeeded in identifying the men. So the Daily Mirror will take up the cause. 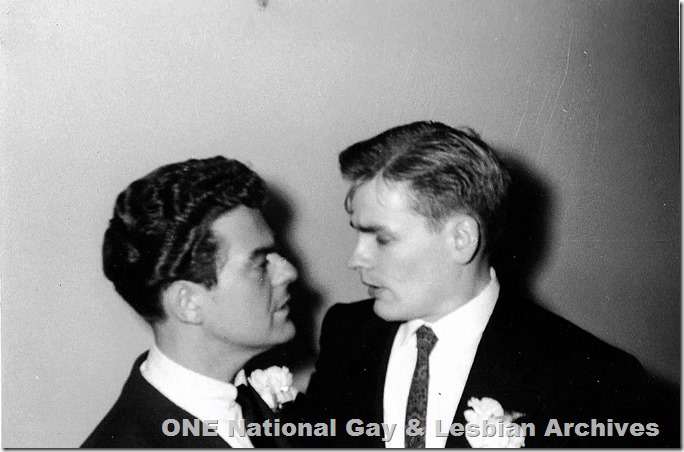 This is the sharpest image of the two men who exchanged vows. The man on the right is wearing glasses in some of the other photos.

Here they are on the right, showing the man wearing glasses. The man third from the left officiates at the ceremony. 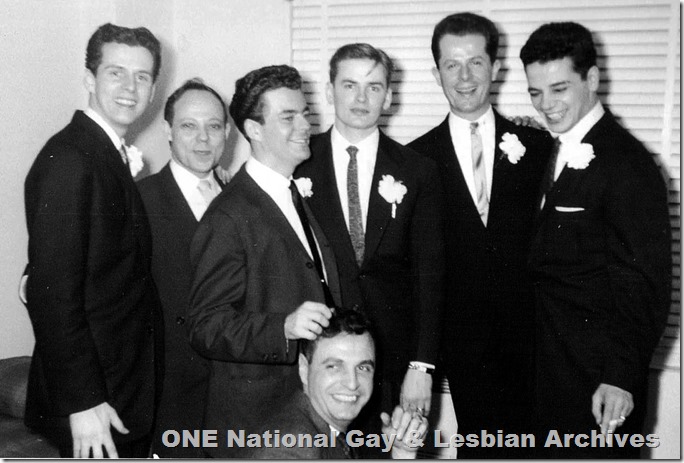 Here they are again, third and fourth from the left. The man second from the left officiates at the ceremony, but is wearing glasses in those photos.

I am retired from the Los Angeles Times
View all posts by lmharnisch →
This entry was posted in 1957, Lesbian, Gay, Bisexual, Transgender, Philadelphia, Photography and tagged 1957, LGBTQ, ONE Archives, photography, Same-Sex Marriage. Bookmark the permalink.

8 Responses to Gentlemen, Your Wedding Photos Are Ready After 62 Years