Constructed in 1922 as part of the expanding restaurant empire of impresario Adolph “Eddie” Brandstatter, the Cafe Montmartre ushered in Hollywood nightlife as its first swanky nightclub during the town’s transformation from rural farming community into high-end factory town.

Brandstatter, born Adolph E. Brandstatter in 1884, served as one of Los Angeles’ top restaurateurs by the early 1920s. Possessing experience working in restaurants in London, Paris, and New York before arriving in Los Angeles in the teens, Brandstatter had served as the maitre d’hotel of Victor Hugo’s before partnering with fellow cafe man Mike Lyman to open such hotspots as Santa Monica’s Sunset Inn and Club Marcell in the early 1920s.

As the Hollywood film industry exploded in the late 1910s and early 1920s, the community and its businesses slowly evolved into a more cosmopolitan city. To serve the growing number of vaudeville and stage performers long accustomed to sophisticated cafes and late-night venues, Brandstatter resolved to open a luxurious, high-end cafe in the heart of Hollywood.

The February 2, 1922, Southwest Builder and Contractor reported that architects Meyer and Holler had designed an elegant, two-story structure to include “three banquet rooms, dance floor, lobby, rest rms., and service equipment.” Brandstatter would lease the space from Toberman, whose real estate office would occupy only a small part of the building, which the Milwaukee Building Company would erect.

That June, permits were pulled to begin constructing the Italian Renaissance edifice, to be opened by late December. The December 29, 1922, Holly Leaves announced that construction delays would push the opening of Brandstatter’s Cafe Montmartre until February. 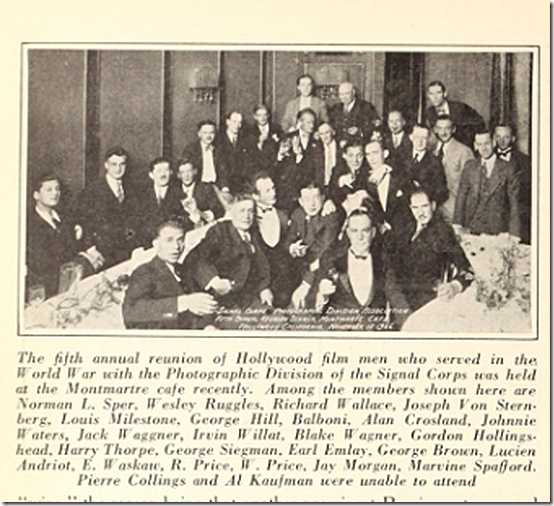 They reported that the upscale cafe would include a first-floor lobby greeting guests with a deli buffet, before they arrived at the second floor devoted to the restaurant. The cafe would feature full dining salon and banquettes with private dining rooms of Russian, French, and Chinese design. Original lighting fixtures from Czechoslovakia, Persian carpets, and unique glassware would grace the interior. To help advertise, the Electrical Products Corporation was hired to create a $1,000 electrical roof sign.

When the club officially opened in February 1923,the Jackie Taylor and Vincent Rose Orchestra serenaded guests at lunch and provided hot jazz for evening dancing, highlighted by the Hess and Bennett dancers. The cafe served luncheon and tea dansants during the day which turning into a swinging nightclub in the evening. Private luncheons and parties could be held in the small dining rooms while elaborate shindigs could rent the full restaurant.

Cafe Montmartre appealed to Brandstatter’s celebrity friends who worked nearby, a perfect location for an elegant lunch or a sophisticated evening out near their homes, potent competition to Wilshire Boulevard’s Cocoanut Grove. To ensure its popularity, Brandstatter employed hot bands and even reserved tables for his best customers.

Bebe Daniels at the Montmartre.

The June 9, 1923, Camera magazine reported that gold name plates giving the initials of such regulars as Charlie Chaplin, Pola Negri, Al St. John, Dorothy Phillips, Irving Cummings, King Baggot, Oscar Apfel, Viola Dana, and Cecil B. DeMille were attached to tables, which were all reserved on first call for the celebrities.

Thanks to its location near the busy intersection of Hollywood and Highland and two streetcar lines, local residents and looky loos stood outside to watch the glamorous comings and goings of Hollywood’s elite and soon began attending themselves. Per ads, there was no cover charge until 8:30 pm, when it cost $2 for both dining and dancing.

Hoping to attract locals and visitors, Brandstatter devised dancing competitions, with celebrities appearing and often judging the results. Besides winning an early Charleston competition, Joan Crawford would judge later contests, along with the likes of Tom Mix, Clara Bow, and the like. In 1925, the winner of a series of dances won a free photographic session at the famed Witzel Studio. By the late 1920s, Brandstatter also hosted high-end fashion shows for department stores.

Brandstatter also took advantage of the new medium of radio, setting up shows featuring his orchestras. The Ray Fox Club Montmartre Orchestra played on KFWB daily except Sunday at 1:10 pm early in 1928, with the Gypsy Orchestra playing at 7 p.m. on Sunday. Later that year,  Xavier Cugat and his Argentinian Tango Orchestra  played live on the radio on Sunday nights when they served as house band. Other club performers included New York band leader Ben Bernie, the up and coming group Bing Crosby and his Rhythm Boys, and the famous Gus Arnheim.

Thanks to its prominent location near film studios, Cafe Montmartre sometimes served as a movie location. Comedian Lloyd Hamilton played duo roles in the 1925 short “The Movies,” where a country rube playing his double in films is mistaken for the famous Hamilton in the club, with the cafe also appearing in the 1927 Paramount film “A Kiss In a Taxi.” The exterior stood in for France when Clara Bow shot the 1927 film “Get Your Man.”

Brandstatter even played himself in a scene from the 1930 movie “Show Girl in Hollywood” when Alice White takes a break from filming at Burbank’s First National to visit the club for a hot jazz lunch. The December 1, 1929, Syracuse Journal pointed out that in the original play and book, only the club was mentioned, but this time, Brandstatter himself and the club also appeared.

As the club became more and more popular with the general public and as newer hip spots like the Hollywood Brown Derby opened, Brandstatter decided to create the more exclusive Embassy Club next door for his celebrity guests. The loss of stars caused the popularity of Cafe Montmartre to decline, so Brandstatter hired Carl Jules Weyl for a small remodeling. The December 1930 New Movie Magazine described the Pink Neon lights and colored confetti that rained down on guests, especially on Friday celebrity nights.

By 1930, however, the Depression and loss of exclusivity hit Cafe Montmartre hard, forcing Brandstatter into receivership under Toberman. Toberman hired Alex Perino, soon to establish a posh restaurant of his own, to manage, with Brandstatter more of a figurehead. The club was never the same.

In 1932, C. E. Toberman filed charges against him for stealing equipment from the establishment valued at $300. Brandstatter was convicted September 24, 1932, though he appealed and received two years probation. The Embassy Club began failing at this time, after raids for illegal alcohol and celebrity clients moving on. Not long thereafter, he moved on to establish the upscale Sardi’s at Hollywood and Vine.

Seemingly successful for the next several years, Brandstatter continued on as a dining impresario, until health problems came his way. On January 18, 1940, his wife discovered him dead of carbon monoxide poisoning at the age of 54, locked in his car in the home garage at 470 Norwich in North Hollywood.

Though Club Montmartre is long gone, the building still survives, an elegant relic of the dash and sophistication of 1920s Hollywood.