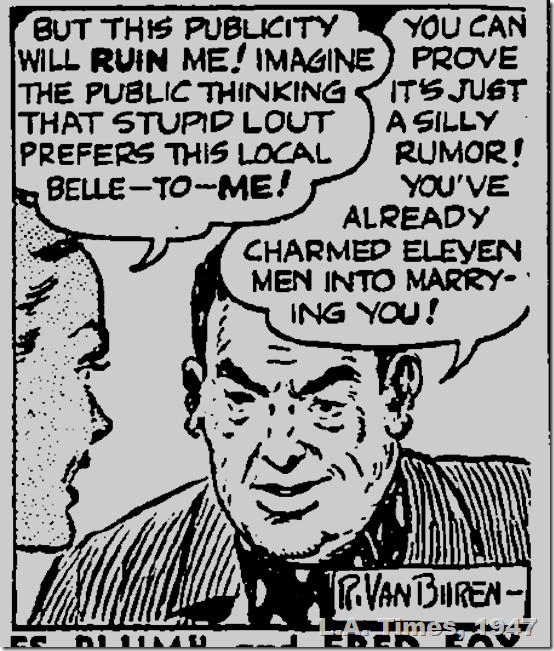 Note: This is an encore post from 2005 and originally appeared on the 1947project..

They were a quiet young couple in their 20s, so quiet that their neighbors in Valley of the Moon, near Santa Rosa, rarely saw them. David Warren worked around their ranch and his wife taught at Sonoma Valley High School.

David and his wife were newlyweds, having taken out a wedding certificate in June and gotten married that month in San Francisco.

But although they lived modest lives, David failed to register for the draft and came to the attention of the FBI. When agents arrested him, they discovered the real story.

Marieta Cook, 26, and Thelma Walter, 28, told officials they fell in love while they were roommates at the University of California in 1940. “I’ve wanted to be a man ever since I was 5 years old,” Marieta said. The women were held under an 1872 law against impersonating another person and making false affidavits to marry.

Unfortunately, The Times never followed the United Press story on this case, so there’s no telling what became of Marieta and Thelma. A Google search turns up nothing. If they were alive today, they would be in their 80s. I would love to know what became of them.

Quote of the day: “Prefrontal lobotomy, a delicate brain operation, is recommended by two prominent neurosurgeons to relieve emotional tension from those patients who have ‘only pain and death to look forward to.’ ”
Drs. Walter Freeman and James W. Watts, “who have performed more than 400 such operations, usually for certain psychoses that have resisted all other forms of treatment.”

I am retired from the Los Angeles Times
View all posts by lmharnisch →
This entry was posted in 1947, Crime and Courts, Lesbian, Gay, Bisexual, Transgender and tagged 1947, crime and courts, LGBTQ, Marieta Cook, Same-Sex Marriage, Thelma Walter. Bookmark the permalink.

2 Responses to November 1947: Women Charged Under 1872 Law for Same-Sex Marriage